Considering the female presence in Charles I exhibition.

Considering the female presence in Charles I exhibition. 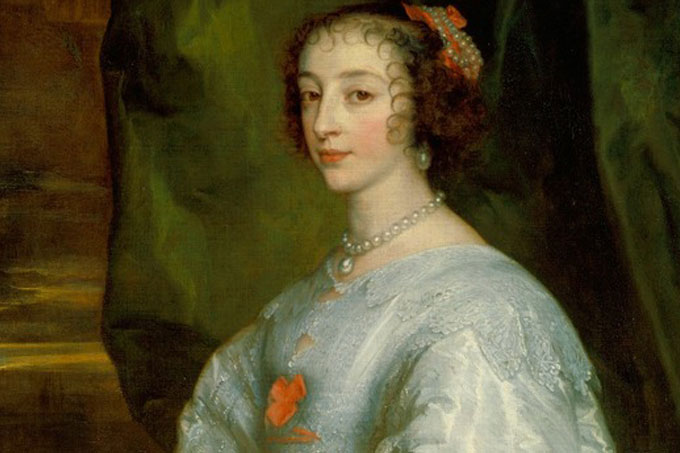 Dr Sara Wolfson looks at the forgotten influence three women had upon King Charles I and his art collection, which is currently being exhibited at in Royal Academy London.

The art collection of Charles I has received huge media interest with the opening of the Royal Academy’s exhibition Charles I: King and Collector earlier this year and the showing of a BBC 2 documentary Charles I’s Treasures Reunited.

As art critics and journalists have pointed out, it is arguably one of the finest Renaissance collections ever amassed by a single monarch.

The exhibition brings together for the first time since Charles’s execution in 1649, many pieces of art which were sold off in the immediate years following as part of the Commonwealth’s ‘sale of the late King’s goods’.

Over a hundred of Charles’s paintings, many of which now form part of the Royal Collection, are reunited with works from galleries across the world, including the National Gallery of Art, Washington; Musée du Louvre, Paris; and, the Museo Nacional del Prado, Madrid. While the public can now gaze at the same Titians, Van Dycks, Holbeins, Mantegnas, Rubens, Corregios, and Gentileschis enjoyed by Charles and his court, for Per Rumberg and Desmond Shawe-Taylor, the co-curators of the exhibition, understanding how the collection ‘was assembled and what it came to represent’ underpins the essence of the project.

Certainly, the media have tried to uncover the man behind the collection. Many have pointed to Anthony van Dyck, the Antwerp born artist’s skill, in making Charles’s portraits exude divine right monarchy. Others have reinforced Sir Peter Paul Rubens’ contemporary appreciation of the king as an art connoisseur, astute buyer and sophisticated collector.

Yet, what has largely been forgotten is that Charles’s artistic choices were seldom made individually, but often in collaboration and on the advice of his many agents and courtiers – Balthasar Gerbier, working as Charles’s agent in Brussels, being perhaps the best well known.

Still this is only one part of the story behind the exhibition, Charles I: King and Collector. The female influence on the King’s collection within the media has largely been silent, aside from a recognition that Charles’s French born wife, Queen Henrietta Maria de Bourbon, ‘had an educated eye’.

Within the exhibition itself, Henrietta Maria’s presence is felt in the room dedicated to the Queen’s House at Greenwich and space provided to her artistic patronage in the accompanying exhibition catalogue.

As scholars of Queen Henrietta Maria have pointed out, Charles’s patronage of Van Dyck was often shared with the queen, whose commissions extended to other celebrated artists and sculptors, such as the Guido Reni, Hubert Le Sueur and Orazio Gentileschi. Whereas Charles recognised that art collecting was part of the magnificence of monarchy and often bought in bulk, recent work on the queen’s artistic patronage by Associate Professor Erin Griffey, University of Auckland, New Zealand, has argued that Henrietta Maria’s selection of art emphasised her Catholicism, personal iconography and piety.

Female influence on Charles’s art collection can be located beyond his consort’s tastes. In 1617, Charles inherited the art collection of his mother, Anna of Denmark, on her death. Though historians differ over the number of paintings Charles received at this time – the most recent study suggesting it was 125 pictures – scholars do agree that this inheritance provided the King with a basis to build his own collection.

Charles’s celebrated purchase of the Mantuan collection in the late 1620s also owed its foundations to a woman, Alethea Howard, Countess of Arundel. The Countess had alerted the King to rumours of a sale after she visited the Mantuan court in 1622 and was offered the possibility of purchasing the collection by Duke Vincenzio of Mantua in 1623. The Earl and Countess of Arundel’s decision to decline the offer paved the way for the royal purchase.

Though the press have mused over the extent to which Charles’s purchase of Catholic art alienated his subjects, they have missed the influence of three Catholic (or at least crypto-Catholic) women on his collection. Arguably ideas of religious polarisation are irrelevant when exploring the King’s artistic purchases and tastes, not least because Charles and his courtiers – Protestant and Catholic – operated in a world where Renaissance tastes predominated – a world that was shaped, as it is today, by the cultural tastes and interests of women alongside men.

Dr Sara Wolfson is Senior Lecturer in Early Modern History in the School of Humanities.