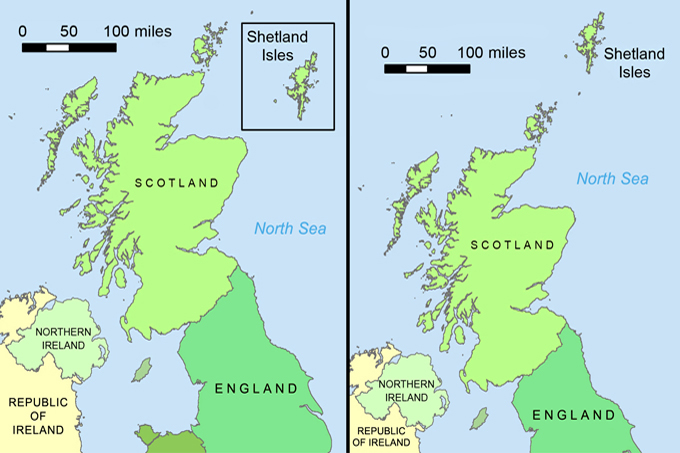 Dr Alexander Kent comments on a new law stipulating how the Shetland Islands are depicted on official maps of Scotland.

A new law has just come into effect banning the placement of the Shetland Isles in a box on official maps of Scotland. According to the Islands (Scotland) Bill that was passed by the Scottish Parliament in May, the Shetlands ‘must be displayed in a manner that accurately and proportionately represents their geographical location in relation to the rest of Scotland’. This means getting rid of the inset box and extending the area covered by the map over 100 miles north to incorporate the rugged archipelago, with under half of one per cent of the Scottish population.

Cartographers have long employed inset boxes on paper maps, where scale and geographical extent are both fixed. The solution allows territories located outside the neatline (the border between the map and its margin) and enlargements of certain areas, such as cities, to be incorporated within the same overall layout. Inset boxes are commonly used in atlases, where maps are typically designed to conform to a standard size and format. Although the introduction of seamless, multi-scale digital mapping has largely eliminated the need for inset boxes, they are likely to remain in use for static media – including official documents.

The Shetlands have been placed in an inset box on maps of the British Isles since at least the seventeenth century, for example, in atlases by Nicolas Sanson (1600-1667) and by Frederik de Wit (1629-1706). Nevertheless, Islands MSP Tavish Scott, who successfully campaigned for what has been dubbed ‘Boxit’, has claimed that ‘Shetlanders are rightly irked when they see Shetland placed in a box in the Moray Firth [which reiterates] the perception that the islands are an afterthought’.

Maps are symbols and are therefore selective. Choosing to map Scotland or the UK at a size and scale that requires inset boxes for some areas serves political as well as aesthetic ends. Official or otherwise, maps are never value-free.

But the key issue here is identity. The cartographic tradition of the inset box denies the Shetlanders the full measure of their geographical separation from the Scottish mainland, understating the practical difficulty of accessing the islands. Remoteness is a key ingredient of the Shetlanders’ identity. However, inset boxes also promote inclusivity and provide a strong visual association. If the new maps serve to enhance perceptions of the islands’ peripherality, they may simply exacerbate concerns over their political underrepresentation. The requirement for official maps to demonstrate the relative isolation of the Shetland Islands may instead serve to reinforce, not eradicate, their treatment as an ‘afterthought’.

Dr Alexander Kent is Reader in Cartography and Geographic Information Science in the School of Human and Life Sciences and lectures on the Geography programme. He is also the Immediate Past President of the British Cartographic Society and Editor of The Cartographic Journal.