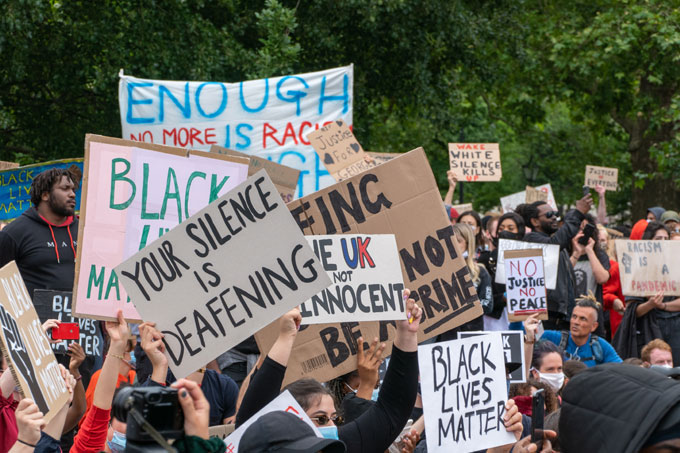 Dr Harshad Keval explores how our problematic and traumatic history is impacting on our present.

As protesters take to the streets and statues topple, society is beginning to examine the fabric of its own social, political, historical and economic history. And perhaps what it sees is not the stagnant, unmoving and fixed memorials to a ‘great’ bygone age, but the remnants of colonial and imperial trauma. This trauma that was experienced by millions of black and brown people, is also not fixed in a point in history, discarded as a silent footnote to the ‘main event’ of imperial and colonial greatness. This trauma is very much alive, and has been working its way through millions of lives, day in and day out, through the complex and dangerous intersections of racism across gender, class, disability, geography and so many other dimensions. The rampant inequalities in housing, employment, education, healthcare, and citizenship are not one great coincidence. They are the product of centuries of a social and economic architecture that, as the voices on the streets of cities around the world are shouting, cannot be denied any longer.

The anti-racist protests driven by the social movement Black Lives Matter were sparked by yet another brutal murder. George Floyd was arrested by a white Minneapolis police officer on May 25 for allegedly handling a $20 bill. It is both the timing and the form of his slaying that begets this moment of pain and potential change. Derek Chauvin, a police officer, knelt on his neck and back for 8 minutes and 46 seconds, while George Floyd pleaded and cried for air. He died shortly afterwards. The open, undeniable visuality of his assassination, witnessed by several other officers and the public is difficult not to place in the same visceral and visual chamber of racial horror that is lynching. The US has a long and dark history of this brutal form of torture and murder.

In 12 southern US states, there were nearly 4400 documented racial terror lynchings between 1877 and 1950, events that were often connected to judicial and legal processes demanding the exercise of power over black bodies as public spectacle. The sheer scope and depth of the problem – what it means to be black or a person of colour in the US today and the racial terror that makes black lives not matter, is not unconnected to the UK’s long history of racism. Again, this comment denies the space required, but as Frantz Fanon wrote in 1961: “Europe is literally the creation of the Third world”. That the UK had been involved in and indeed driven the brutal enslavement of millions of African people, as a highly lucrative business, masks a dangerous trick.

The word ‘had’ powerfully displaces all the problematic history, trauma and enduring racial social structures that have continued to hamper and obstruct black and minority communities in the UK from being free of racism, and conveniently places it in a box called ‘colonial and imperial history’ or simply ‘our Heritage’.

Such a box exists in the national consciousness of the country, and is symbolised in the memorialisation of key British figures who, whilst channelling funds to build ‘Great Britain’, did so with finances derived from an unfathomable genocide and racial trauma. The brutal ‘middle passage’, where two million African people died as they were transported across the Atlantic on ‘floating dungeons’. The 1 in 3 chance for a black man in the US to be incarcerated in the prison system. The fact that if you are a black male in England or Wales, you are more 40 times more likely to be stopped and searched by the police. The fact that out of 21,000 academic staff in the UK there are only 25 black female professors. The disproportionate illness and death rates of BME people throughout the current COVID-19 pandemic. One could go on ad infinitum. I deliberately move back and forth in history because black lives are rendered constantly this way. Because it is not just unpalatable history that is almost written out of school textbooks. It is the present which risks being deleted yet again. This moment requires an acknowledgement and recognition of a future history. We are witnessing a demand and call for action that reminds us to ‘join the dots’.

The Black Lives Matter movement is demanding for not only an end to racial murder, but an end to the constant reliving of racial trauma, enacted and unacknowledged through both everyday tangible systems such as policing, as well as the symbolic representation of a so-called ‘collective national memory’.

The current US government has done little to reduce racial inequalities, and in fact the social climate of racial terror has been given new oxygen to fuel its burning fires. Black populations are living this day in and day out. The situation is not dissimilar to the many racial injustices meted out by various governments in Britain.

As statues fall or are removed around the UK and many people express their indignation at the violation of this ‘heritage’, the moment demands that we re-think what this ‘collective memory’ is and ask ‘whose heritage and life are we celebrating?’ Because how people think they remember Britain’s past, really doesn’t tally with millions of lives – lives that should also matter – in the present and the past.

As we see protesters on the streets, statues toppling and anger being expressed in every news report, some recurring questions have emerged: why the disorder? Why the anger? What does one thing have to do with the other? And George Floyd died in the US, why are people protesting here?

The answer lies in joining the dots. Anti-racist activists and allies across the world are simply joining the dots, and the picture that emerges is a call for society to think carefully about where the scales of moral, ethical and social justice are balanced. Universities and the social science disciplines can, with honesty and commitment, be part of this new emerging picture and help write a new future.

I reside in the hope offered by Maya Angelou: “History, despite its wrenching pain, cannot be unlived, but if faced with courage, need not be lived again.”