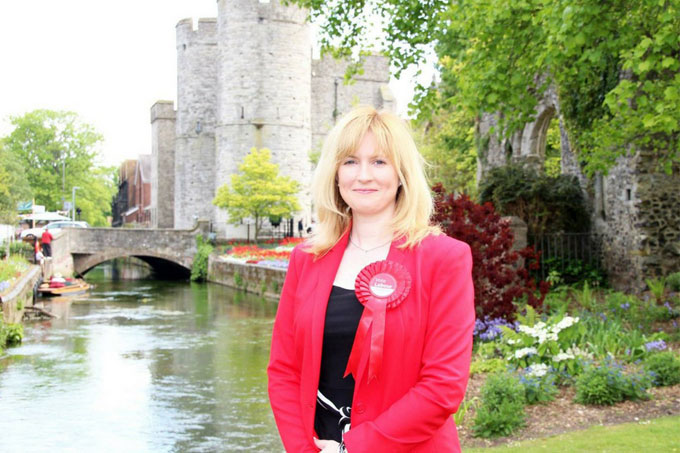 Professor Amelia Hadfield looks at the topics covered by Canterbury MP Rosie Duffield in her maiden speech in Parliament.

On Thursday, September 7, 2017, for the first time in British Parliamentary history, a woman parliamentarian spoke on behalf of the people of Canterbury and Whitstable. As if this wasn’t seismic enough, the lady representative spoke not from the Conservative but from the Opposition backbenches! These epochal shifts were not lost on Canterbury’s new Labour MP, Rosie Duffield, who set the stage by identifying Canterbury as a “famous as a place of pilgrimage” thanks to the likes of Geoffrey Chaucer.

Duffield suggested Chaucer was emblematic of Kent’s early international identity, arguing that in 1370, Chaucer was deployed by Edward III to negotiate a trade agreement between Genoa and England, which Chaucer duly completed to the benefit of both sides (not bad for a budding author).

Duffield wondered whether “our current Brexit negotiations with the EU will be as successful”, reflecting that “after nearly 650 years, we would have picked up a tip or two!”

Duffield’s maiden speech however did not dwell on the past, but placed Brexit and the NHS, at the forefront of her agenda. This makes a change from Canterbury’s previous tradition of political representation. The MP noted the differences between her agenda and those of her predecessor, Sir Julian Brazier, including “equal marriage, Brexit and a woman’s right to choose” though she was charitable enough to also “sincerely wish Sir Julian well for the future”.

Duffield then launched a blistering attack on the national and local challenges being brought about by Brexit, beginning with the Rural Economy. A key area for Kent, both agriculture and the soft fruit industry have emerged as areas of real vulnerability, due to ongoing uncertainties over labour and mobility. As Duffield argued, “many of the fruit pickers are European… I want only the sort of Brexit that protects the rights of EU nationals to work in the EU”.

She’s right. Based on the data gathered and analysed in the University’s Centre for European Studies (CEFEUS) July 2017 report (‘Kent and Medway: Making a Success of Brexit – A sectoral analysis of SME’s and the Rural Economy’), 15% of Kent’s workforce is based in the food industry, while there are 15,000 farm jobs in the Garden of England: jobs populated largely by Europeans. Indeed, 65% of agricultural workers come to the UK from the EU, in contrast to 5% from the UK itself.

Duffield then looked in detail at the NHS, and the challenges faced by the Kent and Canterbury Hospital. In her words:

“I must speak up to save our nation’s sickest patient, because that is what the NHS is. Our NHS is the nation’s sickest patient, and the Government must be careful that, while burying their heads in Brexit, they do not leave her to die… For example, we want to continue to welcome the foreign doctors, nurses and other healthcare professionals who have worked in our hospitals.”

Here again labour and skills are key. Presently there are about 130,000 health and care workers from the EU working in the UK, 10% of whom are doctors, and 5% nurses (NHS Confederation 2016). Meanwhile, one third of nursing jobs with the Medway NHS Trust remain vacant, prompting Kent and Medway (along with 10 other areas) to actively encourage international doctors to relocate to England.

In sum? Well done. A maiden speech has to balance the novelty of being a new MP against the weight of local expectations and national requirements. Add to that the sheer weight of history and the specific challenges of Canterbury itself, and it adds up to a busy parliamentary term. Rosie Duffield began well by simply speaking truth to power, identifying key community needs, and making clear that more needs to be done, from Brexit to healthcare.

Amelia Hadfield is Professor of European and International Relations and Director of the University’s Centre for European Studies.