I’m going to begin with a couple of buildings, although I’ll save Canterbury Cathedral’s great south window until next week except I will thank Heather Newton for showing me around the window this morning – an amazing piece of engineering and craftsmanship. Also before I get to the other building, I’ll just mention that Dr Martin Watts now has over 90 people coming to the one-day conference he is holding later this month on ‘Richborough through the Ages’ in Old Sessions House. However he would be happy to see even more, so do have a look if you are new to the blog at www.canterbury.ac.uk/richborough for details. 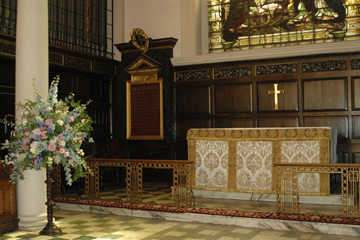 The building I want to draw your attention to is the parish church of King Charles the Martyr in Tunbridge Wells. I was there on Wednesday with Jackie Davidson, the very recently retired archivist from Canterbury Cathedral, and Elizabeth Finn, an archivist at the Kent History Library Centre in Maidstone. As the Kent Archaeological Society ‘team’ we were there to meet our counterparts from Tunbridge Wells because the KAS churches committee will be holding a study day at the church on Saturday 15 October 2016 to explore ‘The Restoration Church and Parish’. In the past we have organised similar study days on the medieval church and its people, what it was like to live through the Reformation and looking at the influence of the Oxford Movement, and it seems fitting to now move into the 17th century. We are fortunate that we have a strong line-up of speakers for the morning talks in that Dr Philip Whitbourn, a local expert, has agreed to introduce people to the early development of Tunbridge Wells. He will be followed by Rebecca Warren who is studying the Cromwellian church for her doctorate and the final lecture will be given by Dr Matthew Reynolds on late 17th-century perceptions of King Charles the Martyr.

Our workshop sessions in the afternoon will feature the church and its documents. As you have probably gathered by now, Jackie and Elizabeth will lead the exploration of the church’s documents, while Dr Richard Morrice, the historic building inspector for Kent until 2009 who currently works for Historic England, will lead the workshop in the church itself. Participants will have a chance to examine both the church and its documents, and as previously it is hoped that people will go away feeling they might be able to explore their own church and its place in the locality. Moreover, the study day will highlight this remarkable church. As I hope you can see just from this one photo the place is very special, not least because it was almost exclusively constructed between 1678 and 1690 and it has a ‘real’ feel of the Restoration period.

Having looked briefly at a representative of what might be called the ‘high’ end of the Anglican Church, I now want to return to Canterbury and a group who would have seen themselves at the polar opposite end of the religious spectrum. Among the documents held by Canterbury Cathedral Archives & Library is a register of an independent congregation that drew up what might be seen as its constitution or covenant in 1645. Initially this was a group of nine brethren, whose leader was Brother William Jones, but at that point there was no designated minister. However by the following year they sought to rectify the situation, seeing such leadership as advisable. The spiritual preparations viewed as necessary are worth recording to illustrate the intensity of this congregation’s commitment to their form of worship. Accordingly they set aside a day when they would fast and prayer, and on 27 March 1646 this course of action was followed and at the end of the day they selected Brother John Durant as their pastor. Just exactly how this was decided is not recorded in the congregation’s register, but what is noted is the endorsement the Canterbury group received from their counterparts at Dover and Sandwich. The presence of such congregations in these two east Kent ports is not surprising for both had a long history of Protestantism, including the presence of religious refugees, albeit this was matched by a strong conservative minority, as well as the ‘silent’ majority.

To a degree the register charts the fortunes of the congregation during the late 17th century. For example, there appear to have been certain difficulties relating to the conduct of worship in 1694, including such fundamental issues as rebaptizing and whether the congregation should sit or stand during prayers before receiving communion. By this time ‘sisters’ had joined the congregation and as well as the minister the group had elected 4 deacons, including Thomas Johnson who had given a considerable number of books for communal use. Nor was Johnson the only donor because Rest Fenner senior and junior had each provided volumes towards what was presumably viewed as the church’s library. As you might expect the majority of the books were biblical commentaries, sermon collections and other religious and ‘improving’ volumes, but Johnson’s gifts were more wide-ranging because they included Benet’s Guide to ye Practical Physian and Gesner’s and Topsell’s Historie of Wild Beastes.

Even though Johnson is a fairly common surname, it is feasible that Nicholas Johnson of St Andrew’s parish, who died in 1671, was related to Thomas Johnson the elderly deacon and book donor.  Nicholas shared Thomas interest (and love) of books because at his death there were 900 bound books valued at £22 10s in his shop, a further 100 more highly valued books at £4, and the most valuable of all – 40 Bibles at a total of £8. Nor was this all because in the great chamber there were 53 reams of different quality paper, rolls of parchment and an unknown number of primers and horn books.

Keeping with this theme of kinship and kindred spirits, Enoch Fenner, who in the early 18th century lived at the corner of Mercery Lane and The Parade (for many years the site of Boots the Chemist before it relocated to Whitefriars), was a stationer and bookseller. An extremely detailed inventory lists his stock that included hundreds of prints and maps, a set of cartoons and Samson’s Geography (1693). As you might expect, he had a considerable number of religious works, including such reformist staples as Calvin’s Institutions (1562) and Owen’s Evangelical Church; several biblical commentaries and numerous books of prayers and testaments, psalms and Bibles. However he also had a copy of Benet’s Guide and other medical books such as Parey’s Surgery (1641), Crook’s Anatomy and Mosses’ Practice of Physick, but there were also books on plants and gardens: Reas’ Flora, English Gardens and Lawson’s Orchard and Garden (1648). Literature was also available, such as Beaumount’s ‘Plays’, Sterling’s ‘Plays’ and ‘Cleopatra a Romance’. Finding two booksellers is perhaps not surprising when you consider the presence of the cathedral clergy as well as lawyers, schoolmasters and other professionals, but it does open up a fascinating window on the literary and other interests of those living in late Stuart Canterbury; and next week I’ll return to the Middle Ages.