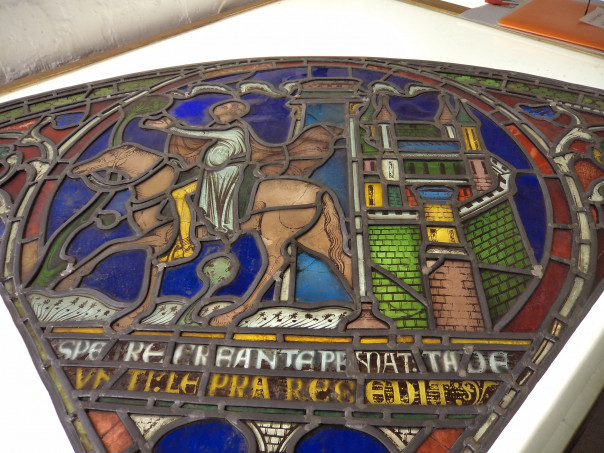 As reported a couple of weeks ago, Dr Claire Bartram is very busy working collaboratively on a couple of projects that dovetail beautifully with her research expertise on books, book collecting and libraries in early modern Kent.

The first of these involves applying to the AHRC Collaborative Doctoral Partnership programme concerning working with the British Library to supervise jointly a doctoral student on the research topic ‘Investigating the origins and development of the Cotton collection’. Apart from being an excellent fit for Claire regarding libraries generally, the Kent connections within the library are even more pertinent, and would offer an excellent opportunity for anyone thinking of undertaking a PhD in Kentish book culture. I’ll let you know how things progress respecting Claire’s application.

Secondly, Claire continues to work with Professor Elaine Hobby (Loughborough University) and they will be holding a meeting later this month with people at the University of Kent, ie Charlotte Cornell and her PhD supervision, Professor Catherine Richardson about holding the 2023 Aphra Behn Europe Society conference jointly at CCCU and Kent. This is another exciting development because it feeds into Claire’s interests and those of others in English at CCCU concerning women writers in early modern and modern Kent.

Although at an early stage, Claire and I want to provide an opportunity for her postgraduate student to develop a doctoral project on the Middle English verse life of Becket found in Corpus Christi College MS 298. This poem has received little scholarly attention, being a reworking of the Latin vita of Becket produced by one of the archbishop’s inner circle of clerks Herbert of Bosham and composed in 1497 by Lawrence Wade, who was a monk at Christ Church priory. By looking at this retelling, the student will be able, among other factors, to assess the importance of place and space for those in and producing the narrative, as well as contributing to continuing debates on late medieval monastic community and culture. Furthermore, the manuscript might be said to have a ‘biography’ in that it was subsequently owned by Archbishops Cranmer and Parker, adding a considerable time-depth to the project.

Thinking about Becket from an interdisciplinary perspective, Claire and I have been in discussions with Professor Rachel Koopmans (York University, Toronto) and Leonie Seliger at the Canterbury Cathedral glass studio because their next project will be nIV as they work around the Becket Miracle Windows. This they are calling the ‘Kent window’ due to it portraying an early stage in the saint’s cult when almost all of the miracles were linked to Canterbury or Kent. Moreover, this window is the only one with especially distinctive blue background pieces with an intricate floral design. The idea of such a window that showcases the county’s links to Becket through these miracles is incredibly exciting and it will be great to hear about Rachel and Leonie’s discoveries once they are able to look closely at these window panels in the glass studio. Consequently, we are working together to explore ways of finding funding for these two projects, seeing them as coming under an overarching umbrella of ‘Exploring Becket’s legacy in text and image’.

As a part of this greater collaboration between universities and cathedral, I had the chance again last Friday to join Rachel in the glass studio to discuss panels she and Leonie are currently looking at from nIII and which featured in the British Museum exhibition last summer. Getting the glass back from London and studying each panel again has given them the chance to make even more fascinating discoveries about what the early thirteenth-century glaziers were seeking to portray and how they went about doing it. Rachel wanted to show me the depiction of Canterbury – cathedral and city walls with gates, and how this is now making even more sense of the way the miracle narrative of Ralph the leper was portrayed.

Also on the bench was the panel where Becket bursts out of a golden shrine to aid a sleeping man, perhaps one of the more famous scenes in the windows. Rachel and Leonie have been giving considerable thought to this panel recently, working as always on both the pictorial elements and the inscription. Even though later additions, corrosion and other features make analysis extremely challenging, the new ideas about this panel that they are developing are fantastic and I cannot wait to see them in print. Moreover, what makes this analysis and conservation work extra pressing in the new corrosion that Leonie is noticing on the back of the panels, which is giving an even great urgency to their work. Consequently, I hope I will be able to report on our collective progress towards finding ways to fund the two projects because time is not on our side.

Returning to the Centre, Dr Diane Heath has been very busy organising the next fieldtrip for her NHLF-funded ‘Medieval Animals Heritage’ project that will again involve a trip to Wildwood later this month. I’ll give you more details another time but suffice to say this collaboration with Wildwood has been a great hit with the families Diane and her team of volunteers have been working with, but then who can resist getting excited about bears, wolves, beavers and all the other animals there!

This week was also a catch-up meeting for the Kent History Postgraduates and because this is a busy time of year we had on Teams just under half of the group’s members. Nevertheless, it was a very lively meeting, and everyone chipped in and offered helpful comments and good suggestions to their colleagues. Keeping with our regular format we went around the screen, starting with Jacie who has almost finished working through the answers from respondents to her questionnaire in terms of food, emotion and families. She has been especially struck by the underlying pride her respondents have indicated in the way their parents made considerable sacrifices for the families’ benefit and for the war effort. Jacie highlighted a particular example of a respondent’s farmer father and how not only did he manage several farms, was a member of the Home Guard but was also a member of the English Resistance, which if the German invasion had happened would have had to leave his family to fend for itself as he fought in the consequent guerrilla war in England. This sparked quite a discussion, including Janet’s observation that her local archaeological group think they have evidence of one of the hidden places in the woods at Scadbury where these Resistance fighters would have resorted as they prepared to take on the Germans.

Keeping with west Kent, Maureen said that she has been busy reading, especially regarding further work on the iron industry around Tonbridge. Amongst her findings are more accounts, including those for another furnace in the area owned by the Sydney family. She has also been going through transcriptions of wills from a collection held by the Tonbridge Local History Society and although these have revealed little that is useful, one nugget is evidence of a loan given to perhaps the most important Tonbridge iron master when he was starting his business by someone Maureen has not come across before.

Jane followed next thereby keeping to Tonbridge, and she had been at the Kent History and Library Centre at Maidstone where she had been examining materials that have been added recently to the online catalogue. These relate to Bayham Abbey including a very neat transcript of the abbey’s cartulary and letters relating to it, which should be very helpful in terms of comparison to the cartulary Jane had previously found at the British Library where the first and last folios are damaged. While she was at Maidstone, she had time to order up a couple more documents and having taken copies of what are 14th-century account rolls, she will be examining these too. However, as she needs to get writing her chapter on religious patronage, she is not going to take a detailed look at these at the moment, just take what she needs for this topic.

Tracey, too, is working on religious patronage but her case studies involve noble families from east Kent, albeit her greatest heiress had interests through her natal and affinal relations across a considerable number of counties. As a result of Tracey’s in-depth research and the richness of her findings relating to these women and their families in the High Middle Ages, she now considers it is far more sensible to concentrate on this period, thereby offering a greater coherence to her approach rather than trying to cover too long a time span, which seems eminently sensible.

Janet had come to the same conclusion for her research project some while ago and she is concentrating her study on the Hundred of Ruxley for the period 1200 to 1350. She is working towards completing a draft of the whole thesis and is currently on chapter two. This has meant one of the topics she has been going back to recently is Domesday as a way of comparing the area’s development between then and the early 14th century. As she said, this is in many ways leading her into historical geography territory which is interesting but challenging. Because she is due to submit by the end of next May, she is starting to think about examiners and that too is tricky because her thesis is very interdisciplinary.

Pete is at the other end of the thesis journey, as he said, and he is currently working on his literature review. For his archive work, he has recently been awarded an Allen Grove Local History Grant to pay for a camera, and he will be using this to chart his research as well. As the beneficiary of the Kent Archaeological Society’s doctoral scholarship financed from part of a legacy from a former KAS member, he has been asked to contribute a piece to the KAS newsletter. He has also been asked to write a new history of Cuxton parish church, all of which is great publicity for his previous and current research projects. For the latter, he offered a fascinating piece from The Times of 1795 on the ‘way to peace and plenty’ which included rules for the poor that featured special recipes that they should follow – another fascinating insight into how groups within society saw others who were viewed as different from themselves.

Thus, it was another great session and next time we will be hearing from Richard Best who has already volunteered to give a presentation on his preliminary findings from his case studies based in west and east Kent on the late Roman/early medieval period – thanks Richard.