Exploring late medieval links across the seas at Exeter

This week is more of a brief note in that Professor Louise Wilkinson has been very busy writing the report on History’s impact work over the last few years, including the activities of the Centre, as well as getting matters organised for the new undergraduates, while Dr Diane Heath has also been busy working on her ‘Medieval Animals’ application. She has also been getting ready for the Canterbury Education Day where the Centre is one of the places involved. The initiative is organised by The Canterbury Tales, and St Augustine’s Abbey is another of the venues where activities take place.

This week saw another surfeit of riches from a historical perspective because last night there were two events going on in Canterbury. For those interested in the early Middle Ages, there was the opportunity to hear Professor Dame Jinty Nelson discussing Charlemagne at the local Historical Association meeting at Christ Church. However, I decided to stick with the early modern period, and thus went to hear Dr Sheila Hingley at the Canterbury Cathedral Archives and Library annual lecture on the fate of English cathedral libraries in the 17th century. As Canon Irvine reminded the audience in the archives reading room, Sheila Hingley had been the librarian at Canterbury Cathedral before she headed north to Durham to be librarian there, but that even after 2002 she had maintained links to Canterbury completing her doctoral studies in 2004 on the Elham Family Parish Collection. Consequently, as Sheila, remarked, it was lovely to see Professor Jackie Eales in the audience last night because Jackie had supervised her PhD from the University of Kent; that is before Christ Church was able to validate higher degrees independently.

Sheila kept with the cathedral library focus, providing her appreciative audience with an assessment of the fate of such libraries in several English cathedrals using, in particular, those chapters in the various cathedral histories that have been produced since 1977, starting with York. The last of these to-date is the one for Durham (2015), and these histories cover cathedrals as widely spaced as Exeter in the south to Carlisle in the north. This is an excellent series, which allows comparisons to be drawn regarding what happened to the libraries, especially before the Civil War, during the 1640s and 1650s, and after the Restoration of the monarchy in 1660.

To keep this short, I am only going to offer a couple of points from Sheila’s fascinating lecture, things that particularly interested me. Firstly, during the 1640s and 1650s in broad terms these libraries were not targeted by the iconoclasts, unlike the stained glass, images, altars and other paraphernalia of the Anglican Church viewed as idolatrous by Puritans and similar groups. Instead these cathedral libraries were damaged to varying degrees by neglect, disinterest or a desire to use the space for something else. Moreover, as you might expect, there were some clerics as well as lay people who chose to secrete books away from the prying eyes of the Cromwellian authorities, and such men included one of the chapter clerks at Winchester. As a result one of that cathedral’s treasure, the Winchester Bible, spent several years in the 1650s at Winchester College before it could be taken back to its ‘home’ in 1677. 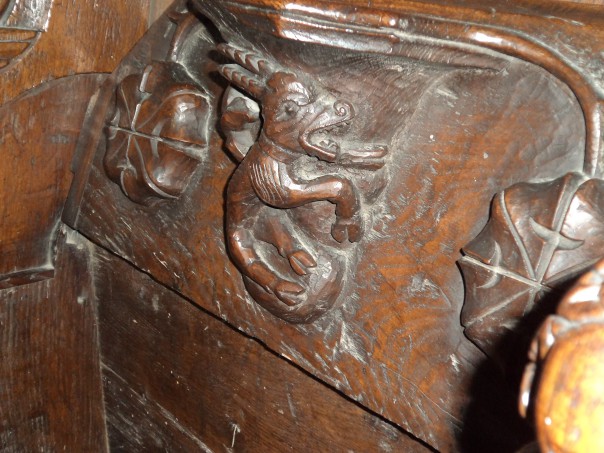 At Canterbury there was also some resistance to the Cromwellian authorities because it had been decreed in 1649 that the collection here should be taken to London. Initially, however, the order was ignored, and it was only after the second command that Canterbury Cathedral let its materials be taken to London. The collection transported to Charter House in 4 barrels, a hamper and a box – fortunately they were returned in similar receptacles after the Restoration. As well as Nigel Ramsey, who wrote the chapter on the Canterbury Cathedral library in the book, David Shaw, a retired academic from the University of Kent, has been working on the books that travelled to and from London.

My final point concerns the way such cathedral libraries, even before 1660, might occasionally be used by those beyond the precincts. The sense of such libraries having become ‘publick’ libraries, valued by educated citizens as well as clerics is fascinating. Indeed the mayor and corporation at Gloucester had petitioned Parliament before the Restoration because local worthies wished to read these books, and so sought to protect the library. This is interesting for a number of different reasons: from the clientele involved, the importance of private libraries that could become the foundation of ‘new’ cathedral libraries, to the types of books that were seen as attractive beyond such staples as moral and theological works. The thirst for knowledge and interest in the natural world, in experimental science, and the desire to map new territorial discoveries were all part of what would become the Enlightenment. So after a fascinating evening, it was time to leave the precincts and next week I will bring you up-to-date with the activities of two Centre members: Drs Martin Watts and Lesley Hardy, the former with regard to Richborough, the latter Folkestone.

School of Humanities @cccu_humanities Anyone still hovering over the MA by Research, 'Do I? Don't I?' dilemma. Great opportunity coming your way... https://t.co/mCNA4Hl9D0

h J R
School of Humanities @cccu_humanities RT @orionbooks: We're delighted to share details of our new work experience scheme, designed in response to the lack of cultural, class and…