Having had a number of meetings this week about prospective Centre events for 2018, I thought I would just mention them before reporting on the last of the Kent History postgraduate seminars for this academic year.

Firstly, a couple of notices, and I’ll be giving more information next week about the Centre’s joint conference with Kent Archaeological Society on ‘Place Names and Family Names’. This conference will feature Dr Paul Cullen, probably well known to many of you, and who is a contributor to Early Medieval Kent, 800-1220 (see the blog a few weeks ago). At this point do please make a note of the date: Saturday 12 November, and tickets can be booked at: https://canterbury.ac.uk/arts-and-humanities/events/events-list aspx Secondly, the ‘Tudors and Stuarts History Weekend’ website is now live at http://www.canterbury.ac.uk/tudors-stuarts and do have a look if this sounds interesting. Do please remember if you encounter any difficulties that the box office will not be staffed until Monday morning but will then be open from 10.00 on 01227 782994. However, you can use the email address of artsandculture@canterbury.ac.uk and again the staff will get back to you on Monday.

This week I want to feature two medieval lectures I heard at Faversham and Canterbury respectively that again highlight the richness of Kent’s medieval heritage and how this is of interest to many within the county. On Tuesday, I joined a crowd of people who packed into the parish church of St Mary of Charity at Faversham to hear Professor Paul Biniski from Cambridge discuss the wall paintings in the north chancel chapel. Professor Biniski’s expertise in art history is well known, and he has worked on the decoration in many of the great cathedrals, including Westminster Abbey and more locally Canterbury Cathedral. He has also studied wall paintings in parish churches, especially those of East Anglian that hold some of the best examples in the country. Consequently, Faversham was exceedingly privileged to have him as a speaker and hopefully his presence will raise the profile of these important paintings. The problem relates to their position because they have been largely hidden by the organ that almost totally fills the chapel. At a result, only one figure can be seen and even he is not very clear. It has been suggested that the organ should be moved again to reveal the paintings, which will also mean that they can be conserved.

So what will we see if this happens? As Professor Biniski said, there are three saints who are linked to English national identity: St Edward the Confessor, St Edmund king and martyr and St Thomas of Canterbury. In addition St John the Evangelist, disguised as a pilgrim/beggar, is on the opposite side of the arch to St Edward because the king is said to have given a ring to him as an act of charity. Such an act might recall the division of his cloak by St Martin when he gave half to another beggar at the city gate – see Dover’s medieval town seal. To return to Faversham, as Professor Biniski mentioned, St Edward received particular acclaim in the 13th century because of Henry III’s considerable devotion to this penultimate Anglo-Saxon king of England, known for his wisdom rather than his martial prowess. Henry III’s devotion led him to construct a fantastic shrine to the Confessor in Westminster Abbey and further work at the abbey is similarly some of the best medieval decoration in England from this period. Now, as he was keen to point out, Faversham is not in that league but it is still exceedingly good. Furthermore, the late 13th/early 14th century is known for its especially graceful wall paintings. In terms of the execution of the paintings, I was very interested to hear that the painter of those figures in the chapel had used water-based paint, but Professor Biniski thinks the ones on the octagonal column are probably in oil paint.

As well as the wise king and one of Christ’s companions, the inclusion of St Edmund who met his end trying to defend his kingdom of East Anglia against the Vikings would have been a powerful reminder to those visiting the chapel of other aspects of kingship, including his willingness to sacrifice himself for his people. This sense of sacrifice might also apply to St Thomas of Canterbury in that he was exceedingly popular among the people of Kent, who seem to have seen him as some sort of people’s champion. Paul Biniski thinks there may be a representation of the martyrdom somewhere on the wall, which would be another good reason to move the organ. Moreover, as in some stained glass, there also appears to be a painting of a donor. Robert Dod kneels with a prayer scroll under a very fine canopy and what is especially intriguing is that only two of the saints are mentioned in his prayer, and not St Edward. Thus, it is feasible that there was (or hopefully still is) another donor painting somewhere nearby. With such fascinating insights into these wall paintings, Professor Biniski captivated his audience and Faversham could be moving into a very interesting period of discovery. 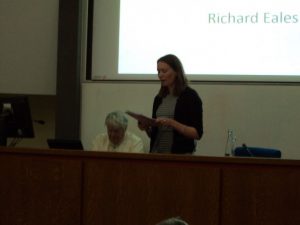 My second event took place at the Canterbury branch of the Historical Association where Richard Eales, formerly of the University of Kent and now of Canterbury Christ Church, provided an assessment of the Norman Conquest and its aftermath, with special reference to Kent. Richard drew on a whole range of sources from chronicles (Norman and Anglo-Saxon), charters, archaeology, Domesday Book, and the Bayeux Tapestry. In particular, he used the latter to provide a narrative of events from the last years of King Edward the Confessor through to the arrival of William’s fleet of ships in England, the feasting of the invaders when on shore at the expense of the English peasants and the battle itself. Because I am on a hunt for medieval representations of the pig, I was particularly delighted to see that one poor pig was the victim of the Norman foragers. 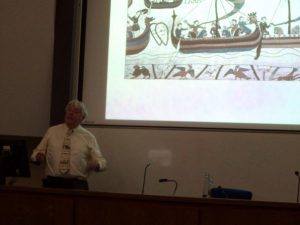 Richard then offered an assessment of recent ideas regarding Duke William’s march through Kent via Romney, Dover and Canterbury as he initially took the coastal route on his way towards London, as well as a further force heading to Winchester to collect the royal treasure. He highlighted, using the Domesday Book, those areas that had seemingly suffered most at the hands of this invading army, although, as he said, such evidence is not clear enough to be able to deploy to map the Norman route through Kent with a high level of precision. Nonetheless, he showed that east Kent had experienced considerable destruction during this early period, but, of course, nothing on the scale of William’s ‘harrying of the North’ somewhat later. Yet, as Richard pointed out, resistance to the Normans was regionally or locally based which meant that any chance of success was severely limited. Moreover, the vertical and horizontal internal divisions within English society similarly hampered a concerted response, thereby enhancing William’s position as he set about a major redistribution of English lands. 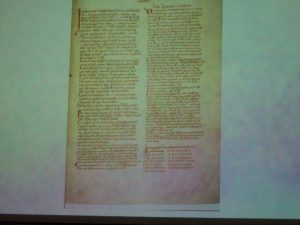 The Canterbury entry in the Domesday Book

Landholding in Kent was a major feature of the later section of his lecture and Richard noted the level of church ownership and its continuity from Anglo-Saxon times and into the period of the Norman kings, something that makes Kent different from many other regions. He similarly observed the role of Bishop Odo as a major landholder and how this can be seen as a royal subcontracting arrangement, in some ways not dissimilar to the role the Godwine family played during Edward the Confessor’s reign. Not that this was still the case in 1086 because Odo’s rebellion against his half-brother has led to his exile and his vast estates passing under direct royal control. This and Odo’s subsequent rebellion meant that in broad terms half of the county was held by the Church and much of the rest was in the hands of large numbers of minor baronial families. Being an expert on castles, Richard provided an overview of Kent castles. He noted the role and form of the three royal castles of Rochester, Canterbury and Dover, including Canterbury Archaeological Trust’s recent findings regarding the extremely large extra-mural bailey at Canterbury, and then briefly turned to the mass of castles constructed by Odo’s and Archbishop Lanfranc’s sub-tenants.

Like Professor Biniski, Richard Eales provided a fascinating analysis, which similarly drew a number of questions from his attentive audience. Furthermore, Richard’s talk was especially appropriate considering we are now just a matter of days away from the big anniversary. Thus for medievalists in Kent this has been a good week.