As a starting point, I thought I would mention that Professor Louise Wilkinson and I are putting together a series of evening talks for the first week in September 2020 ie beginning Monday 31 August on ‘Kentish Saints’ as part of Becket 2020.

Eanswythe, Westgate, Faversham and the Black Prince – another busy week

This has marked another busy week for the Centre, but before I come to that I thought I would let you know that tickets for the Tudors and Stuarts History Weekend on Saturday 13 and Sunday 14 April 2019 are selling well already. Among the talks that people are interested in so far are Dr Helen Castor’s discussion of Elizabeth I; Dr David Starkey’s exploration of aspects of Henry VII’s ‘highly idiosyncratic reign’; Dr Clive Holmes’ examination of why Oliver Cromwell was not a persecutor of witches, and Professor Andrew Hopper’s investigation into the human costs of the English Civil Wars, which draws on his exciting new work on petitions made by wounded soldiers and others who sought financial help from successive governments during the mid 17th century. Please do have a look at the full listing, then select to make your own choices within our pick-and-mix scheme to tailor ‘your programme’ to your interests, and perhaps those of your friends.

To a degree this follows on from last time in that again there is a maritime theme to this short blog. Firstly, although I wasn’t able to attend this year, I have a brief report from Dr Martin Watts about Whitstable Harbour Day, which took place last Saturday. As an ex-merchant seaman, Martin is keen to promote all things nautical and, as he says, it was another excellent day.

Since the last post I have been out and about in Canterbury, Folkestone and Lympne. Paul Bennett, Director of Canterbury Archaeological Trust, and I have been discussing religious houses and pilgrimage with our MA ‘Medieval Canterbury’ option module postgrads from the University of Kent at two recent sessions. During the first of these Paul conducted an in-depth tour of the cathedral precincts, which meant we looked at both the priory and the medieval archiepiscopal buildings.

Last week I was looking back, so this week I’m going to look forward to 2015 and some of the important anniversaries that will be celebrated here at Canterbury, as well as elsewhere across the country. From an English medievalist’s perspective the big two are Magna Carta (1215) and the battle of Agincourt (1415), but in a county that was in the frontline of the response to Napoleon it seems only fitting to mention the battle of Waterloo (1815). For the Canterbury Centre, the most significant of these is Magna Carta and among a number of events scheduled to take place next year will be the conference at the University on Saturday 6 June when Professor David Carpenter will reveal what he has discovered about Canterbury’s copy of ‘the Great Charter’. This Charter is often seen as marking one of the fundamental steps in the road to democratic freedom, being championed by amongst others the Founding Fathers of the United States of America. All of this is indeed great to remember and comment on but today I want to mention briefly another Canterbury event. 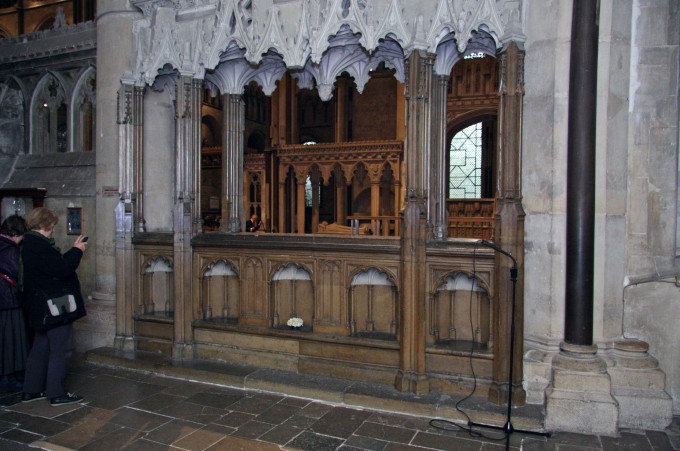 I want to take you back to the summer of 1381 and the English Rising, or its more common name the Peasants’ Revolt. The latter is a misnomer because many townsmen were involved, not least in Canterbury. My link to Magna Carta involves the rebels’ demands, for according to contemporary chroniclers included within these were the abolition of serfdom, negotiable contracts between servants and masters, and perhaps most interestingly the requirement for the ‘law of Winchester’. The latter has been identified as the Statute of Winchester (1285) by Alan Harding, and as a demand for communities to have rights and responsibilities – to defend, regulate and police themselves – not face what was seen as outside interference, the misuse of judicial authority by powerful men, because it was the commons who were the ‘true’ guardians of England. Such sentiments, of course, arise again and again throughout history, another Canterbury link to these ideas being John Bale’s play of ‘King Johan’, performed in 1538-9, probably first at the archdeacon’s residence at St Stephen’s, Hackington, and then during Christmastide at Archbishop Cranmer’s palace at Ford to the north east of Canterbury.

This neatly, I hope, takes me to my last point, another archbishop and another Christmas event. In this case Archbishop Sudbury who is still honoured every year in Canterbury Cathedral on Christmas Day when the Lord Mayor places Christmas roses at the archbishop’s tomb (see above). This act of commemoration for what Sudbury did for Canterbury brings together cathedral, city and see, the archbishop having been a great benefactor of building works such as the cathedral nave, Holy Cross parish church (today the city’s Guild Hall), the Westgate, a section of the city wall and Sudbury’s Tower. Yet as in 1381, when Archbishop Sudbury as Chancellor of England was killed by the rebels at London’s Tower Hill (seen as one of the main men behind the hated third Poll Tax, as well as a major landlord in Kent), and before that in 1215 when it was the great magnates who took on King John, history is as much about conflict as it is about co-operation. For the cathedral, city and see regarding Sudbury this came about at Christmas 514 years ago when rather than attend the prior’s Christmas Day ritual at Sudbury’s tomb, the mayor William ate Wode and the civic authorities undertook ‘the customary prayers and orisons under the prison house called Westgate of the city’, a deliberate and calculate slight by the city in its acrimonious dispute with Christ Church Priory over certain contested lands called the Rosiers that were on the border between the city and the archiepiscopal manor and Hundred of Westgate. Consequently in 2015 let’s remember and also explore these past events that so often bring together a complex mix of co-operation as well as conflict.

h J R
School of Humanities @cccu_humanities RT @BookcultureCCCU: Thank you to our lovely audience on Wednesday for attending and asking such good questions. Do book in for the Annual…