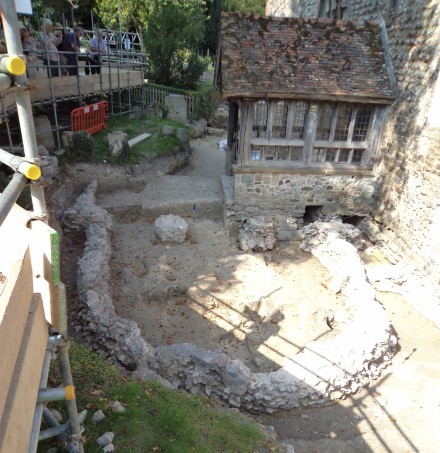 As a starting point, I thought I would mention that Professor Louise Wilkinson and I are putting together a series of evening talks for the first week in September 2020 ie beginning Monday 31 August on ‘Kentish Saints’ as part of Becket 2020. Mostly, these will take place in Canterbury’s parish churches starting at St Martin’s on the Monday, St Paul’s on Tuesday, then moving to St Mildred’s on Wednesday, St Dunstan’s on Thursday, St Peter’s on Friday before finishing at St Thomas RC church on Saturday 5 September. As you might expect this will allow us to bring in saints in Kent from across a period that spans over 900 years. We and the churches are very excited about this, especially because we will have a complementary exhibition at Eastbridge during late August and early September. More on this shortly as things progress and we finalise the programme.

Around the Bank Holiday weekend, while Professor Louise Wilkinson was in York and Dr Diane Heath was in the West Midlands, I decided to take a busman’s holiday to visit Cambridge, Sudbury and Ely. I shall leave Cambridge aside but will bring you a few topics from Sudbury and Ely that chime with matters relating to ‘Kentish Saints’ before bringing in an archaeological excavation that is presently taking place at Lyminge.

Starting at Sudbury, having looked in some detail at Archbishop Simon Sudbury, and especially his final years, I was very keen to visit St Gregory’s church. For those who don’t know it, much of the present church is a later 14th century rebuild of the Anglo-Saxon church, mostly by Archbishop Simon’s father, Nigel Theobald and then by Simon, preparatory to it becoming a college. It is also worth noting that further rebuilding took place in the chancel a century later to provide a fitting college chapel, and much later Victorian restoration work can also be seen. 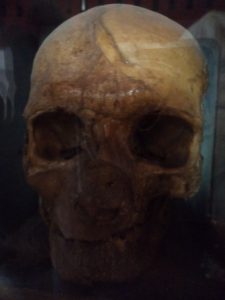 The head of Simon Sudbury

Nevertheless, for the link to Canterbury, apart from the fact that Simon was a considerable builder – at Sunbury and Canterbury, both places can claim to have certain parts of his body. For even though Canterbury Cathedral has the ‘lion’s share’ in the tomb on the south ambulatory, sitting in an alcove behind glass in the vestry at St Gregory’s church is a head. Probably brought to Sudbury by John, Simon’s brother, within days of the archbishop’s murder (martyrdom) by the rebels in 1381, Simon’s right ear can be seen (but difficult to photograph) and there is also some skin.

Moving to Ely I just thought I would report that I found what remains of the medieval hospital dedicated to St John, the site of a 15th-century almshouse (now Victorian rebuild), and the city’s excellent museum (run as a charitable trust), which is due to close for about 6 months while it undergoes an exciting redevelopment. The Heritage Lottery is a major sponsor, but they have others and the community involvement is extremely important. I spoke to a couple of volunteers behind the desk who are hugely excited about what this will mean for ‘The Old Gaol’, because, as well as more gallery space, new exhibitions and a big space for educational events, the Cambridgeshire archives are coming to Ely, which means they hope to have a Heritage Hub and encourage people to undertake local, regional and family history research. Having seen what has happened elsewhere, including at Canterbury, I was immensely encouraged by what I saw there. 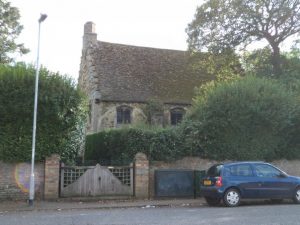 However, I digress and for this week’s theme the crucial point is that the cathedral was founded by an Anglo-Saxon female royal saint. St Etheldreda, the daughter of King Anna of the East Angles, received the Isle of Ely from her first husband and she fled back there when things became very difficult with her second husband, King Egfrid of Northumbria. As well as founding a double monastery at Ely (ie for both men and women) in 673, she shared other characteristics of these saints for she had to fight to maintain her virginity during her marriages, she had an older female close relative who was an abbess and her spiritual advisor was a senior churchman. Like other monasteries in eastern England, her community at Ely were badly hit by the 9th-century Danish raids, but unlike some of the Kent houses Ely was part of the 10th century monastic revival, the Benedictine community going from strength to strength, albeit there were a few problems in the aftermath of the Norman Conquest! But the point I want to stress is the role and significance of these Anglo-Saxon royal women, especially in the later 7th century, for the foundation and development of monasteries as central foci for the Church. 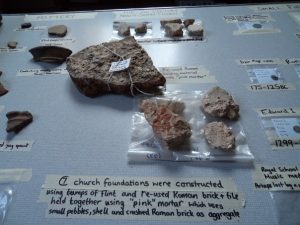 Finds from the Lyminge excavation

Now the textual sources for these Anglo-Saxon centuries are sometimes quite tricky to deal with in terms of what we might term hard facts, not least because much of what historians have comes from later, often 11th-century manuscripts. This is not to decry the value of such sources, but it is vital to consider when they were produced, by whom and who was the intended audience. This more sophisticated deployment of such texts has been undertaken by scholars such as Amy Remensnyder, who has looked at early medieval monastic foundation legends from southern France. This type of analysis has similarly been employed concerning St Gregory’s priory in Canterbury, but the important point here is that we are dealing with complex ideas about memory, and perceptions of antiquity and authenticity (see The Regular Canons in the Medieval British Isles, eds J. Burton and K. Stober). Where feasible, therefore, it is valuable to adopt a multidisciplinary approach bringing together the work of historians, literary scholars and archaeologists, which brings me nicely to Tuesday. 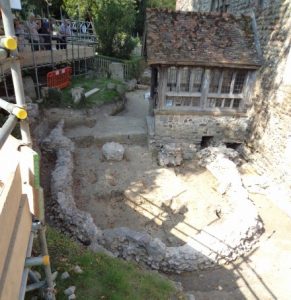 On Tuesday I joined Dr Andrew Richardson (CAT) and FCAT members, a group the Centre has worked with on numerous occasions, on a visit to the current excavation in Lyminge churchyard that is re-excavating what Canon Jenkins dug in the 19th century. This work is being carried out by the HLF-funded ‘Pathways to the Past: Exploring the Legacy of Ethelburga’ project organised by Rob Baldwin, with Dr Gabor Thomas (University of Reading) spearheading the archaeology team. Gabor has been working at Lyminge for over a decade and during that time he and his earlier AHRC-funded team have found mid Anglo-Saxon timber-framed feasting halls and a considerable collection of vessel glass among other high-status finds. In addition to this evidence of Lyminge as the centre of a royal estate, the archaeologists have previously investigated the slightly later monastic enclosure (late 7th to the 9th century), and the present excavation fits into this latter story.

Rob introduced the group to the textual evidence – primarily Bede and the Kentish Royal Legend – and the foundation date of 633 for St Ethelburga’s religious community. We then went outside the present medieval church to view the excavation where Gabor discussed what they have discovered. As Gabor explained, much of the site had been cut through by medieval and post-medieval graves, which countered, for example, Canon Jenkins’ idea that there were niches cut into the foundations of the eastern apse of the Anglo-Saxon church. Canon Jenkins had also hypothesised a triple apse arrangement, but Gabor can now confirm that the church had a single stilted apse, which means Lyminge is in keeping with what we know about other contemporary churches. Similarly, Gabor and his team have found that the nave was wider than the apse and that there was a triple arch at the crossing, as at Reculver and known from antiquarian illustrations. Another feature recently found at Lyminge is the narrow porticus on the north side that has been sliced through by the Norman church, which seems to have functioned as a sacristy and has parallels to one at St Martin’s church in Canterbury. The team has also been able to find evidence of the west wall of the church, as well as evidence of successive structures at the western end, confirmed by the use of a different mortar. Again, there are parallels elsewhere, as at St Augustine’s Abbey and Old Winchester, but Canon Jenkins’ idea about a sequence of Anglo-Saxon churches is pure fabrication. 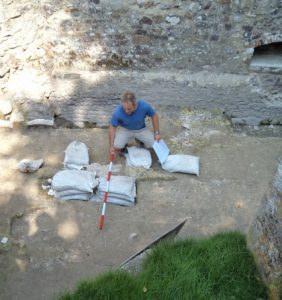 Gabor demonstrating the line of the west end of the church

The team has been undertaking a second excavation in the churchyard close to the war memorial preparatory to the installing of a new path. This too has yielded some interesting results, posing new questions about the relationship between mid-Saxon timber-framed structures (from a series of post holes), a later mortared flint building and a beam slot that seems to be on the same alignment from an earlier building. Among the finds have been white mortar fragments, pottery, lots of peg tile and high-quality painted plaster. Putting all of this together, Gabor thinks the stone building could have been the 12th or 13th-century archiepiscopal aula (hall), the stone above ground taken at a later date to repair Saltwood castle. Thus, some of these structures were contemporaneous with the Anglo-Saxon church, suggesting a link across this whole area. 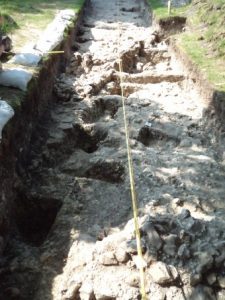 The excavation near to the war memorial, showing the stone walls and post holes

Yet, as Gabor and Andrew Richardson discussed, are we really looking at a religious community associated with an Anglo-Saxon royal female saint from the 630s, a question that the HLF-funded ‘Finding Eanswythe’ project team are also wrestling with, or is it far more probable that both at Lyminge and Folkestone these saintly founders were operating in the 650s. This would still offer the likelihood of an overlap between the royal estate and the church at Lyminge, as well as maintaining the early importance of this complex. For the future, Gabor is hoping it may be possible to use a new technique developed in Denmark to date mortars and at Folkestone the team similarly hope to be able to use science to secure a more precise dating.

Taken together, I think this shows a considerable interest in Kentish saints, and, while I have by-and-large concentrated on the Anglo-Saxon female saints here, I believe our series in September 2020 will highlight the diversity of saints associated with the county and their fascinating stories.