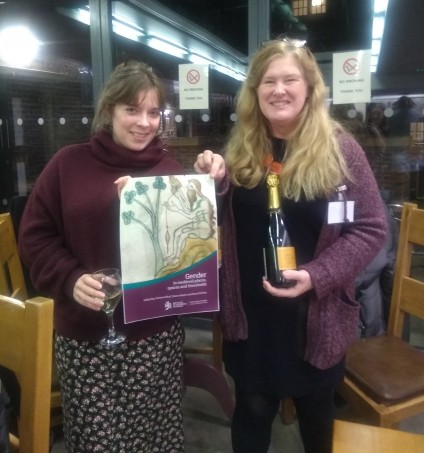 So 2019 has arrived, which means firstly I want to wish all readers of the blog a Happy New Year! The new year looks very exciting because we have the Tudors and Stuarts History Weekend 2019 coming up on 13th and 14th April. For those interested, please refer to the webpages at https://www.canterbury.ac.uk/tudors-stuarts and I’ll be featuring some of the Weekend events in the blog next week – when I’m not marking essays!!

We also have the Somner day conference on Saturday 23rd March, and details for that are available at: https://www.canterbury.ac.uk/william-somner and events, including a conference on the 24th and 25th May, linked to the celebration of Canterbury’s UNESCO World Heritage site – St Martin’s church, St Augustine’s Abbey and Canterbury Cathedral. More details about the conference and associated events will be available shortly, and I’m especially looking forward to the A-Z that will be produced under the guidance of Professors Peter Vujakovic and Jackie Eales that will feature Advent-calendar style illustrated posts in the lead-up to the May conference. Not that this is all the Centre is involved in over the coming months, but hopefully it does give you a flavour of our spring events. 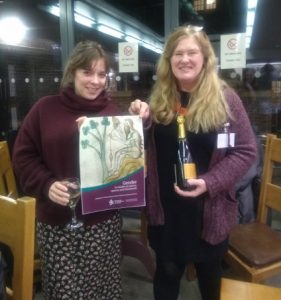 To return to this week specifically, I’ll be reporting shortly on the second meeting of the Friends of Canterbury Castle which took place yesterday, but first I want to mention the book launch that took place on Monday evening at the Gender and Medieval Studies conference, hosted by the University of Durham – see  #GMS2019 . This year the theme is ‘Gender and Aliens’ and among the speakers is Dr Diane Heath (Canterbury Christ Church University) who is discussing ‘The Bestiary Hyena as Alien Nightstalker’. Such a topic will come as no surprise to those of you who know Diane and her passion for medieval animals and how they were interpreted and understood in medieval culture. Diane was also heavily involved in the book launch because she is one of the editors and contributed a chapter to Gender in Medieval Places, Spaces and Thresholds, the conference proceeding from the very successful 2017 Gender and Medieval Studies conference, which took place in Canterbury. Published by the Institute for Historical Research: https://www.sas.ac.uk/publication/gender-medieval-places-spaces-and-thresholds  this book is also available to download at: http://humanities-digital-library.org/index.php/hdl .

In her chapter, Diane chose to move away from medieval animals and instead drew on her research on the tomb of Lady Joan de Mohun in the undercroft of Canterbury Cathedral. Diane became interested in this tomb and especially its location close to the altar of Our Lady Undercroft when she was teaching at CCCU several years ago, using the tomb as a special case study for undergraduates to think about gender roles in late medieval political and religious contexts. Since then she has explored further matters of patronage, identity and spirituality, as well as ideas about liminality and memorialization. This has led her to consider the notion of ‘tombscape’ and how “Joan’s tomb might make the “invisible” or “inaudible” women promiment in their own tombscapes again by adding ideas of female agency … [to] records of Joan’s carefully-chosen benefactions, the site and design of her own tomb, and her life as a distinguished courtier and member of the inner circle at Court before and after her husband’s death.” 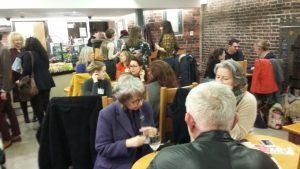 Diane is not the sole contributor from CCCU, Dr Leonie Hicks has written the ‘Afterword’ where, as a historian of Norman landscapes, she reflects on ideas from the conference and in the subsequent volume. Additionally, I have a chapter on the roles of three female religious houses in Canterbury and its hinterland, which I think: “reveal that the presence of religious women in the landscape did not solely denote weakness. Indeed, at times their activities can be characterised as involving negotiation, exchange and reciprocity, thereby implying the value some of these women placed on female agency.”

Nor are these the only chapters on Canterbury and Dr Jayne Wackett (University of Kent) explores the presence of women within the surviving wall paintings of Canterbury Cathedral, and then compares her findings to her preliminary study of wall paintings at Rochester Cathedral. From these she concludes that: “At both Canterbury and Rochester there are more men in the paintings than women, and in both places there are paintings just of men, but never just of women. In Canterbury, although we saw a variety of female types, mothers, wives, virgins and a sinner, they were all seen in relation to men and all in relation to sainthood. [In contrast], at Rochester … even just at two representations (allegorical figure and a contemporary fourteenth-century woman) there is, arguably, a more varied approach to female portrayal than on the walls at Canterbury”. 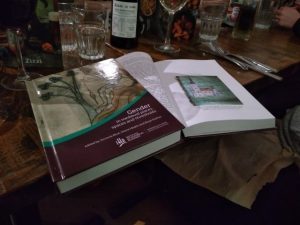 The book and the photo of St Lawrence’s hospital church, Canterbury on a 16th-century map [photo: Robert Mason]

As I hope you can see, this is a very interesting and exciting volume and the fifteen chapters with the Foreword, Introduction and Afterword explore the four themes of ‘Sacred Space’, ‘Going Places’, ‘A Woman’s Place?’ and ‘Watch this Space!’ – nice links to the book’s title.

To return to the Canterbury Castle meeting, as an inclusive group headed by Connie Nolan, we were delighted to welcome Paul Bennett, the Director of Canterbury Archaeological Trust and a Visiting Professor in the Centre) and Cllr Robert Thomas (Canterbury City Council’s Heritage Champion and a Kent County Councillor) to join those who had met last time. Since the last meeting, Connie has had a letter of support from Rosie Duffield, Canterbury’s MP, and others are hoping to join the group or offer their support. Those present think that we have now refined our key objectives and the first two are ‘that the Castle be conserved and repaired’ and ‘that it be open to the public’. To try to aid the latter, although these also have implications for the former, we wish to encourage research projects on the site of the fortifications, as well as seeking to reinterpret the site so that its position in the history and heritage of Canterbury will be better understood. Of course, finance is an issue and our fifth aim is to seek funding or help those responsible for the castle to seek such funding for these objectives. 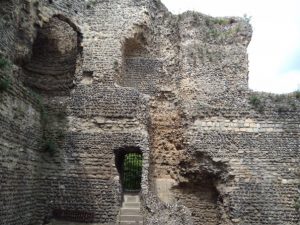 Canterbury Castle before it was closed to the public

To these ends, we have decided to work on a multi-pronged approach and Paul and Robert, in particular, are going to explore liaising with Historic England and Canterbury City Council regarding the feasibility of a new architectural survey. In this context, it is exciting to relate that Canterbury Archaeological Trust has just picked up part of the bailey wall – in a trench as part of the new Canterbury City Council car parking arrangements.

Another prong (or sub-group) will consider the documentary sources for the castle’s history. Richard Eales has studied Kent castles, including Canterbury, in the past and he will join Leonie Hicks, as the Norman expert at CCCU, as well as Professor Louise Wilkinson who this spring will have an MA student Joshua Rhodes working on these sources as part of an employability internship. 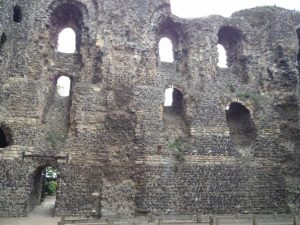 Moreover, to raise awareness of these activities, the final prong for the time being will be an exploration of the feasibility of holding a workshop or mini-conference on the castle and its importance in October this year. As part of this, we will look into having an exhibition on the castle and its ‘use and abuse’ through the ages – for the latter as a Victorian coke store springs to mind, and it would be great to work with other local organisations on these events. For example, we have built a very good relationship with Lyndsay Ridley at The Canterbury Tales, and castles and dragons would seem to be a great combination!

However, more on this in due course and for now I’ll just remind anyone in Canterbury that this evening (Wednesday) the Canterbury Historical and Archaeological Society lecture, held at CCCU at 7pm in Newton, Ng03, will be Dr Stuart Palmer (University of East Anglia) speaking on ‘’Dining together: banquets, breakfasts and corporate solidarity in Early Tudor Canterbury’.

School of Humanities @cccu_humanities Did you know Mary Shelley was living in Kent in 1832, during a C. epidemic (no, not that one)..? https://t.co/sFCfDB1AFH @KentMaps1 https://t.co/QbeTW5b9RG 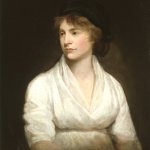 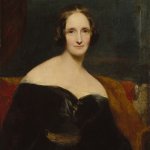 h J R
School of Humanities @cccu_humanities @MargateBookie: We can't wait for Carolyn's new book, Down from London: Seaside Reading from the Railway Age Check out our chat with her on her forthcoming book, writing journey and what's to come https://t.co/Fq4fxJwMLN Down from London is out March 2022 #WritingCommunity @writing_at_CCCU https://t.co/oxZtJflcNa 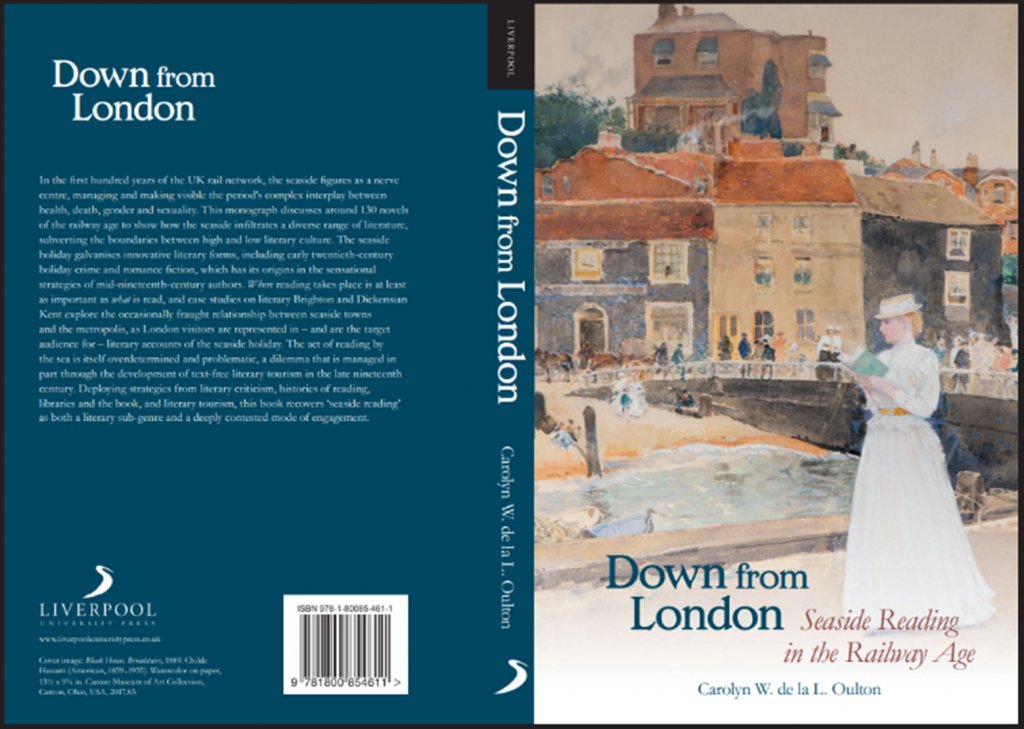 h J R
School of Humanities @cccu_humanities @EHUNineteen: 💀💀'Paintings, Mirrors, and Monstrous Doubles in Irish Gothic Writing'. Fittingly, there are not one but TWO opportunities for you to hear this workshop by our @BARS_official / @BAVS_UK '19thC Matters' Fellow @madeline_cct for @GothicRomancing. FREE (donations welcome)!👇 https://t.co/U2hLl7ZOMN 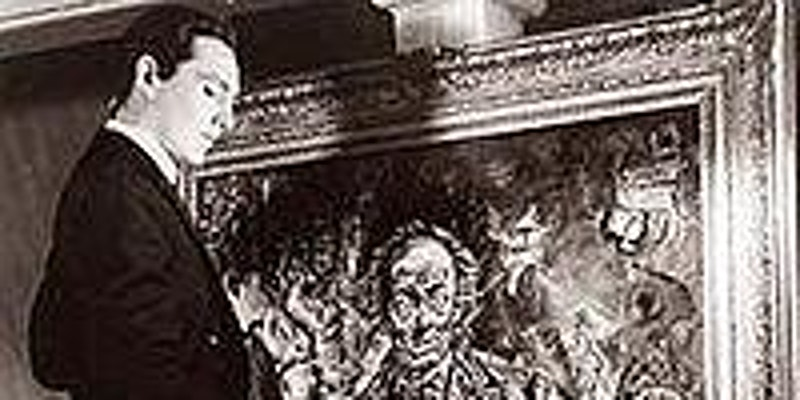