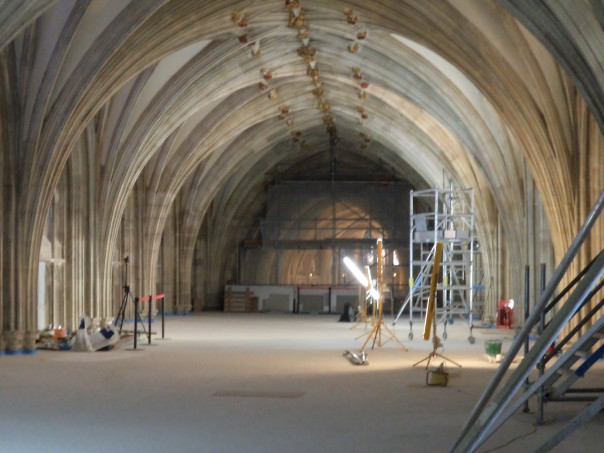 Before I come to Richard Best’s presentation to the Kent History Postgraduates group, I thought I would catch up on a few other matters involving staff from the CKHH.

Firstly, we are sorry that currently Dr Claire Bartram is unwell and we wish her a speedy recovery. Secondly, in light of the current national health situation, Dr Diane Heath has decided to postpone the ‘Medieval Animals Heritage’ safari to Wildwood that was due to take place on Thursday 30th December. Once I have more news on the rescheduling and other details, I’ll let you know because this project is fantastic and has been embraced enthusiastically by the families in east Kent with whom she wishes to engage using her ‘medieval beasts’.

The next issue I wish to bring to your reiterate is that The Janus Foundation through the Centre’s Ian Coulson Memorial Postgraduate Award Fund wishes to provide financial assistance to two suitably qualified applicants to undertake doctoral studies, one full-time and the other part-time, who want to pursue a research topic closely associated with either: Kent’s maritime communities c.1350-c.1600, with reference to a specific community or communities OR Lossenham: the history and development of the Rother Levels. The idea is that these doctoral students at CCCU will start their chosen project early in 2022 and in the first instance anyone interested should contact me at sheila.sweetinburgh@canterbury.ac.uk for further details.

Another project that the CKHH is involved in is the creation of a permanent Magna Carta and other charters, documents and artefacts exhibition at Faversham. This is on behalf of the Town Council, and it has been most interesting to work with them and others from Faversham and the Kent Archives Service, including Dr Justin Croft whom I know well from our days in the Centre for Medieval & Tudor Studies at the University of Kent. Work on setting up the exhibition is progressing well, and the next stage is to decide on the texts for the various exhibits and to provide linking information. In addition, there will be a website which will offer far more detailed explanations about the charters, the first town book and the civic paraphernalia such as the common horn and wand of office. Consequently, we had a meeting this week and the next task we will be involved in is working with Justin on the exhibition text with the intention that the exhibition will be open to the public next spring.

Then last Friday Diane and I were extremely grateful to Heather Newton, Head of Building Conservation at Canterbury Cathedral, for giving us a guided tour of the conservation work that has taken place on the south-west tower and the nave with its fantastic late medieval vaulting and roof bosses, as well as interesting much later stained glass. Many of the roof bosses feature lions and other animals which Diane greatly appreciated, but there is also a possible representation of Richard II and his master mason Henry Yevele. However, rather than discuss this wonderful hidden space, I’m just going to offer you a few images on the grounds that these are worth several thousand words.

A topic that I am going to say a bit more about is the latest Lossenham Project workshop. This marked the beginning of the winter season online sessions for project volunteers and people interested in historical and/or documentary sources. The session took place on Tuesday when I used the opportunity to explore two depositions produced in response to a tithe case brought before the diocesan church courts of Canterbury. I’m very grateful to Dr Paula Simpson, another friend from Medieval & Tudor days, whose doctoral thesis on 16th-century tithe cases in the diocese of Canterbury has been especially helpful and, in addition, she supplied photos from the church court deposition book for this specific case from Rolvenden – depositions don’t survive for Newenden even though there were a few tithe cases. Thus, all I had to do was transcribe the two depositions, think about what this case can tell us, such as matters relating to customary agrarian practices, and then put the presentation together.

Consequently, what I’m not going to do here is go through the forms of tithe, the diocesan courts and the cases they covered, how an instance case was supposed to proceed with its potential 15 steps, nor even the reality of such cases on most occasions, or the type and form of the records. However, what I will indicate (see the image below) is the usefulness of such records to historians before mentioning briefly how interesting and useful this Rolvenden case turned out to be.

The plaintiff in the case was the holder of the parsonage of Rolvenden while the defendant was a farmer from Cranbrook who held pasture in Rolvenden from which he made hay, as well as using the grassland to graze his cattle. The case hinged on the parson’s desire to reverse a ‘time out of mind’ agreement whereby the grass or hay tithes had been commuted from kind to cash, grass/hay from the marshland seen as worth more than that from the upland. The deponents or witnesses in the case were two local men, albeit of different social status, who had been involved in the hay making the previous summer.

Using their statements, I had managed to come up with 16 points that I thought provided insights into what this case offered historians from ideas about the significance of outsiders who farmed land in Rolvenden and who employed local men at peak times in the agricultural year to ideas about good agricultural practice as understood by Rolvenden parishioners. This provided a good starting point for our discussion and people came up with further points, thereby highlighting the value of such sources, especially because the area covered by the Lossenham project is sandwiched between two ‘hot spots’ for tithe disputes in Kent – the Weald and the Romney Marshes. Consequently, tithe would seem to be another useful source the project historians might explore profitably and next month we will be staying with the High Weald in that Dr Brendan Chester-Kadwell on Tuesday 18th will be leading the online workshop on ‘reading’ routeways of the High Weald. If this sounds interesting, please contact Annie Partridge at annie@lossenham.org.uk for details.

So now to Richard’s presentation beginning with a summary of his research topic where he explained that he is exploring how people interacted with the post-Roman landscape, which was littered with Roman material, and thus how this past environment influenced the cultural identities of those who inhabited early medieval Kent. As he said, in recent scholarship there is a growing realisation that regional studies offer a fruitful means to investigate such phenomenon because they can make use of the limited extant evidence from some sites and can get away from generalising from disparate datasets. Consequently, he has selected three case studies: Thanet, West Kent, and Canterbury to give him both rural and ‘urban’ sites where he can examine landscape, settlement and objects, or what might be seen as moving from the macro to the micro.

In terms of objects, he is keen to explore the recycling of Roman pottery and the example he had chosen was the making of spindle whorls. For, as he said, the makers of these objects needed to be able to cut and drill the old Roman pottery successfully which meant they developed expertise in knowing which types of Roman pottery were suitable for this re-use, as well as having a specialist knowledge of different textiles to ensure the correct type of spindle whorl was available for those making cloth from different raw materials.

A similar type of understanding would have been needed by those who recycled Roman metalwork, including lead coffins for the making of brooches and other objects. Another interesting example was the use of Roman coins as weights for a balance, a conscious gathering of Roman material to be used for something different than its original intention. Stone was similarly re-used, and this might be in the form of buildings, such as the chapels of St Pancras and St Martin at Canterbury or at Minster in Sheppey, as well as the deployment of quern stones from the Roman villa site at Folkestone as pillow stones.

Regarding settlement, Richard is investigating how this took place near or at Roman sites especially in the centuries before King Alfred’s specific programme of developing defensive burghul sites. Thus for Kent, his West Kent case study will include the Roman villa sites of Keston, Darenth and Northfleet, as well as the Eccles villa site and its 7th-century cemetery which seems to demonstrate this connecting with past landscapes. While other places that would seem to offer interesting cases of re-use and resettlement are Reculver and Dover.

Richard then turned to his Canterbury case study, discussing what has been discovered regarding what happened in the 5th century and then through to the 7th century. To illustrate his analysis, he focused on two structures as part of Canterbury Archaeological Trust’s archaeological excavations in the city, the first highlighting how people had incorporated parts of a Roman building into their new structure and how they had reused part of a Roman floor, as well as Roman artefacts. Thus, he sees three phases between the 5th and 7th centuries, beginning with avoidance, then encroachment and finally appropriation.

The Roman theatre offers an especially rich example in that it was seemingly a focus in the post-Roman settlement, possibly as a marketplace, the alignment of the surrounding streets taking into account its structure of entrances and exits. Furthermore, Richard sees it as a valuable example of the idea of cognitive mapping where people orientate themselves whether consciously or sub-consciously through the use of landmarks and as a way to interpret their surroundings.

Furthermore, such visual anchors are hierarchical, being influenced by social and cultural information, and the resulting ‘map’ will see a primary anchor organising a secondary area and so on. For post-Roman Canterbury, Richard considers the theatre would have been a primary visual anchor because it was visually prominent, and as well as having social and cultural significance. Moreover, assuming it was used by the kings of Kent as a place of justice or similar, its political significance would need to be added to the mix. In addition, such points of reference were not static in terms of meaning, and as Richard highlighted, this all needs to be considered as a dynamic landscape where meanings, as well as uses were subject to change and re-interpretation.

Richard’s presentation sparked several questions and comments from those present, and for his West Kent case study Janet offered further places that might be useful additions to those places he has earmarked already. Such comments and suggestions were typical of the responses members of the group provide for their peers because this is a wholly co-operative and supportive group with a great range of knowledge and whose members are great at thinking thematically across time and space. So concluded this term’s meetings of the Kent History Postgraduates which have included lots of fascinating presentations, Richard’s following in the same tradition.

Apologies Drs Jake Weekes and Ellie Williams, I totally forgot to include the launch at Waterstones recently of the Canterbury Historical Map – congratulations to all those involved and here is the group photo from the launch.

As a final point, due to a technical hitch the Medieval Canterbury Weekend 2022 website won’t be up until the first week of January, but as soon as it is I’ll let you know. In the meantime, we at the Centre for Kent History and Heritage would like to wish readers of the blog a safe and healthy Christmas time.