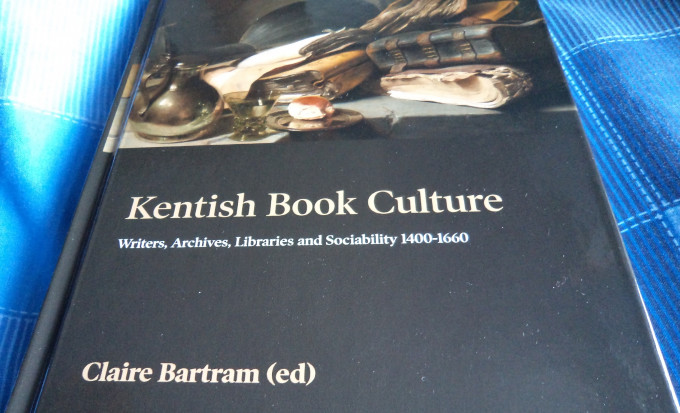 Stop Press: the Centre’s first online event on Wednesday 25 November at 7pm, the FREE Kentish Book Culture book launch, is now up on the university’s website and can be booked at: https://www.canterbury.ac.uk/arts-and-culture/event-details.aspx?instance=332606  Please note that the booking email will contain the text ‘You will receive access details for the event nearer the time.’ Kellie will email out the URL and instructions a day or two in advance to give people who haven’t used Teams before a chance to get to grips with it. Moreover, if you have used Zoom, it is not that different and any experience you have had with one system will be useful for the other.

Leading those presenting that evening will be Dr Claire Bartram, as editor, but also as Co-Director of the Centre. As regular readers of the blog will know, Claire has written several articles concerning literary and historical works on and by writers from Dover, and as she will discuss among these is John Tooke. Tooke was a local mariner whose interest in the Dover Harbour works was both professional and personal, making him a fascinating figure as he sought to engage with those in Dover, including his fellow mariners, and crown officials.

Such engagements between different groups through the written and printed word underscores many of the essays in this edited collection, and is one of the topics that contributors will pick up on in the presentations and conversation that will follow Claire’s initial presentation. Among the contributors who will be joining Claire are Dr Lorraine Flisher and Dr Gillian Draper, whose articles draw on case studies that relate to religious ideas and tensions in west Kent, especially in the small towns of the Weald and the Romney Marches respectively. Not that all the book’s contributors locate their studies within late medieval and early modern urban society, but the long tradition of literacy and the well-developed bureaucratic systems in place in the Cinque Ports, in particular, from as early as the 13th century have implications for a manuscript and book culture in Kent throughout the period covered by Claire’s collection. Thus, if this sounds interesting, please do come and join us on Wednesday 25 November at 7pm. Furthermore, Craig, even during lockdown, is determined to support this book launch with a window display in the CCCU Bookshop that will involve this and other Kent-related books, including Dr Diane Heath’s edited Canterbury A to Z. Hopefully Craig will succeed in getting a special deal from the publisher, consequently, if this interests you, too, please do contact Craig at: https://bookshop.canterbury.ac.uk/  because they are operating postal and collection at the bookshop services.

I now want to move to another online meeting, but this time one I attended as an audience member, albeit the Centre has worked in partnership with FCAT (Friends of Canterbury Archaeological Trust) on lectures and workshops, as well as being involved in the new Historical Map of Canterbury project. For the latter, Professor Jackie Eales has been working with Dr Jake Weekes at Canterbury Archaeological Trust since 2016, and Jackie more recently has been helping to secure funding from several sponsors for the new map’s publication. As I expect you have gathered, the lecture I heard last night was on the production and format of this exciting new mapping project, this stage of the project having nearly come to fruition in that the map will be available to buy early in the new year.

During his talk, Jake provided background information about the Historic Towns Atlas series, the parent of the Canterbury project, and as the name suggests the ultimate aim is to produce an historic atlas for Canterbury, thereby joining an illustrious band of cities not just in Britain for which such resources exist. One of the major advantages about working within such an organisation, as Jake noted, it that he and others in the Canterbury team have had considerable help, including cartographic expertise, from the ‘parent’ organisation, especially from Dr Giles Darkes, and more general guidance from Professor Caroline Barron and Professor Keith Lilley. At this point it is well worth mentioning that the project team incudes Dr Alex Kent (CCCU, Geography) and one of his postgraduates, who undertook much of the early work to produce the base digital map based on the 1907 3rd edition OS map.

So what will the map provide? As Jake was keen to point out, the new map will not just update the ‘Roman and Medieval Historical Map’ by adding material found during more recent archaeological excavations, but will seek to provide a degree of time-depth – a layering or palimpsest whereby what is 2-D, can represent in some way 3-D stratigraphically. One of the ways Jake has done this, as he explained, is to use the front, back and sides of the map. The main map of Canterbury having around it a 1200-word essay by Jake and Paul Bennett to provide a brief history of the city through twenty centuries, while on the back Jake has provided a complete gazetteer of places of interest and his own special contribution. The latter is his phasing of the development of Romano-British Canterbury through maps and text, for, as he said, this is generally all shown on the single map produced by Simon Pratt, another of the Trust’s experts on Roman Canterbury.

Another aspect of the new map that Jake was keen to highlight is that it goes beyond the medieval and denotes the city’s topographical history up recent times – hence the idea of the ‘twenty centuries’. To demonstrate this aspect, Jake used the development of the area of the cathedral precincts and its immediate surrounds to show how through mapping connections can be made that are otherwise not obvious or even totally missed when looking at specific sites.

Thus, the map will be a great tool for those who want to explore Canterbury’s rich past, whether as armchair enthusiasts or out walking the various areas shown on the map. Moreover, with the sale of the map hopefully beginning early in 2021, Jake is already starting to plan the atlas, this part of the project funded by map sales once the printing costs have been covered. Other avenues Jake wants to develop are a phone app whereby people can tap into information about a specific building or neighbourhood while out walking, for example; as well as a much greater digital offering on the Trust’s website, again under the heading of ‘Twenty Centuries of Canterbury’. Although not yet live, it is quite well advanced and hopefully it will not be long before this, too, will become available.

Jake’s presentation was very well received, as was obvious from the comments and questions afterwards, and it is clear that the map will sell well once it becomes available. Moreover, there is also a ready audience for material on the Trust’s website and I think all of this bodes extremely well for the Canterbury Historical Atlas.