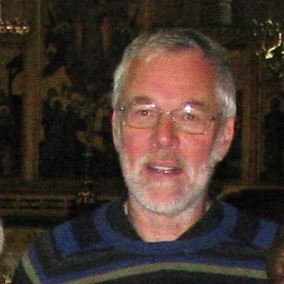 Today I’m going to begin at the end and work backwards, and the particular end I’m focusing on is that of a very good friend of the Centre, as he was for many of the historical and archaeological organisations and projects that have taken place in Kent for decades. So today Ian’s family, friends, neighbours and colleagues said farewell to a colossus in education, especially in Kent but not exclusively, whether we are talking about primary school children right the way through to adults of all ages and backgrounds. For Ian Coulson was an inclusive sort of chap who wanted to share his passion for history and archaeology with anyone he came in contact with, and he came in contact with vast numbers as a teacher, an education advisor, including at the highest levels, as a member of several high-profile projects, including the Dover Bronze Age Boat, as the driver of the Kent History Project, and as president of Kent Archaeological Society (KAS), and this list is far from exhaustive.

So to return to the end, as a lifelong biker it was only fitting that ‘Ian’s last ride’ should be in the sidecar of a motorbike ridden away from Wye parish church on a grey December afternoon to the sound of clapping and an initially stuttering bike engine – maybe it too didn’t really want to say goodbye. The crowd who stood there applauding was so great that it stopped the traffic for a few minutes in the centre of Wye, again fitting because Ian has been so influential there over several decades, and particularly after Imperial College set out to close Wye College and dismantle this ancient institution, sometimes literally, for all the time he cared about the local community – its people, buildings, heritage and future.

This send-off came as the climax of a special sort-of funeral where the packed church, including those standing at the back, heard from five close friends and/or sometime colleagues who spoke about five of Ian’s passions: basketball, motorbikes, teaching, advising and history, their reflections topped and tailed by the incumbent, Ravi Holy, who brought a lovely touch of Anglican inclusivity to the proceedings, and, of course, he is dead right (please excuse the pun) because the notion of all belonging to a parish and thus coming under the care of the parish is a responsibility Anglicans acquired from their medieval ecclesiastical forebears.

Now for those who are interested in these areas of Ian’s life I would strongly suggest that you look at ‘Ian Coulson: In Memoriam’ www.thinkinghistory.co.uk but here I’m just going to mention the project linked to Canterbury Christ Church that Ian was heavily involved in before the Centre came into being; a foretaste you might say of his desire to bring academic historians, professional archaeologists, members of the general public, and mostly particularly schoolchildren together to work on a shared goal. The HLF-funded project ‘A Town Unearthed’ looked at Folkestone’s past from a very wide range of angles, and, as well as Christ Church (Lesley Hardy and Paul Dalton) and Ian, the other partner was Canterbury Archaeological Trust (Andrew Richardson, Keith Parfitt, Marion Green, Paul Bennett and others). One of the tangible results of this collaboration was the book on the history of Folkestone: Folkestone to 1500: A Town Unearthed, which Ian both edited and provided a chapter on late medieval Folkestone – in exchange for producing a schools pack on Lady Anne Clifford for me, I did some work on a rental and the late medieval wills of Folkestone for him. For those of you who have seen it, it has the Coulson touch – lots of relevant colour photos of objects, reconstructions, landscape features, archaeological sites, and what he also believed were invaluable: maps and plans.

Equally telling are the photos of people – pot washing volunteers, looking into and out of the Folkestone People’s History Centre, and walking across Castle Hill while Ian or another of the project team explained what could be seen and why this mattered in Folkestone’s evolution. This enthusiastic engagement, the teaching of well-researched history, the ability to explain the complex simply without losing either the audience or the subtly of the topic that gave Ian his mastery, and it was a skill he was keen to share with others, whether officially (when he had been a school advisor/inspector) or unofficially. So yes, the Folkestone project produced results in terms of items that could be ticked off, but probably just as importantly it gave locals a stake in their town’s history and heritage, they had been central to the project’s success.

So what of Ian’s other activities? I’ll just very briefly mention two. Although perhaps not the initiator he was most definitely the driving force of the Kent History Project, the idea that KCC would publish ten chronological volumes on the history of the county, and if there was space and time other thematic volumes. Well driving this project was been a far more uphill struggle than Ian must have envisaged at the beginning. However the end is in sight and even though I had really hoped to get the final volume on Early Medieval Kent, 800–1220 out before he died, at least he knew it almost there. Perhaps just as importantly he knew Staplehurst south porch door will be featured on the cover with its 11th-century ironwork of 2-headed snakes, birds, fish …; fitting also because Ian and Liz lived there before moving east. The other activity I want to mention is Ian’s presidency of the KAS. Ian in his early years as president, with the able assistance of Peter Stutchbury and others, began with some difficulty the process of bringing the organisation into the 21st century. Although this was still a work in progress when Ian fell ill, his legacy is already there in, amongst other things, the new look Archaeologia Cantiana. And finally, it is worth recording that this nicest of men was an accomplished cartoonist and a fan of the Oysterband – you cannot ask for more than that in a great friend. Ian, it was privilege to know you.