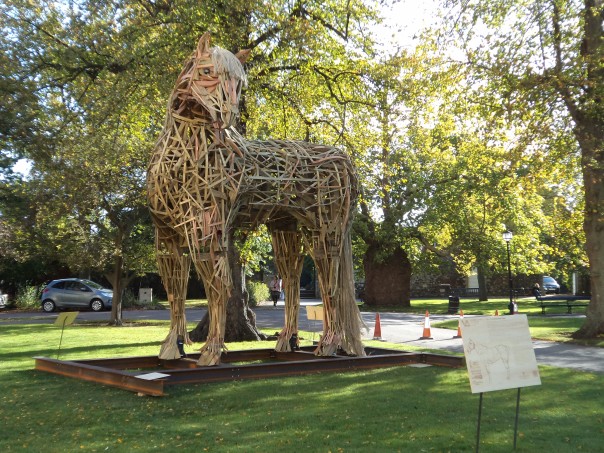 Because ‘War Horse’ has arrived in the cathedral precincts, I thought I would again draw attention to the ‘100 Years since Armistice’ event that will be taking place on Friday 9 November at Canterbury Christ Church. Details of the talks, music and readings during the day-long programme are available by calling 01227 922994. Another programme of events that I thought I would mention is the ‘Being Human’ festival which will be taking place in late November in Canterbury, Folkestone and Margate. Full details are available at https://beinghumanfestival.org/

For those of you who have been following the ‘Finding Eanswythe’ project in Folkestone, lots of volunteers joined the team for a very successful ‘dig’ recently to find the watercourse; and in November there will be an exhibition in the town to show what the project has found so far. Some of the group have also been in the Canterbury Cathedral Archives recently, where amongst other things they have started looking at late medieval wills. Finally for this introductory section, I thought I would mention that details of Canterbury’s Tudor ducking stool appeared  some while ago in the Centre’s blog, to see this: https://blogs.canterbury.ac.uk/kenthistory/canterbury-and-hythe-more-kentish-treasures/ 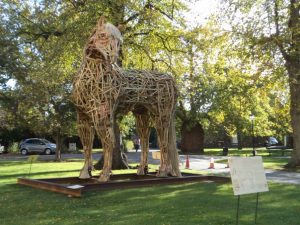 Other things have also been happening in the Centre this week and Dr Diane Heath will shortly provide a blog post of developments regarding her work with Penny Bernard and Dr Alison Youd (Education) to produce a grant application for their ‘Medieval Animal Safaris’ project. This all looks very exciting, but I’ll leave it to Diane to explain how they are intending to deploy her doctoral work on the medieval bestiary to create educational packs for schools. For this work, Diane secured a small grant last summer from the Canterbury Historical and Archaeological Society, while the second part of the project will involve adapting the teaching materials and format to engage other school-age groups.

Another potential project based in the Centre that Professor Louise Wilkinson and I are working on will look at late medieval urban households using Kent’s testamentary records. For our pilot project, we will seek funding to investigate the towns of Faversham, Rochester and Maidstone with the intention if all goes well to extend it across the county. The beauty of such a project is that it will complement the earlier York project on the late medieval urban household, which primarily focused on (northern) great cities such as York and Norwich, and Dr Chris Briggs’ current project on late medieval rural households because ours will consider (southern) urban households in medium and small town society. I’ll let you know how both projects progress over the next few months. 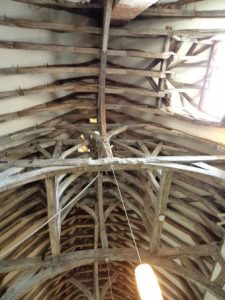 These projects will combine new research and the dissemination of our findings to new audiences not only within academia but to the public of all ages. These two strands of the Centre’s work were also on view this week for on Monday the Centre welcomed Dr David Starkey to Canterbury Cathedral Archives to conduct the first of two master classes for postgraduate History students at Canterbury Christ Church. Dr Starkey is currently re-assessing Henry VII’s role in the management of royal finances and he used the first session to discuss various methodological approaches, as well as the need to have a knowledge of the society under investigation. Further, he highlighted the need to understand the mechanisms whereby different types of records were produced. However, before he focused on early Tudor royal accounting systems, he got the students to think about the materiality of money (specie) – how it was collected, the size and form of money bags, where it was stored, how it was protected, moved about safely … Having discussed the complex workings of the Exchequer compared to the simpler means employed by members of the aristocracy with the students, he explored ideas about Henry VII’s financial needs to combat rebellion among other matters, all of which were a considerable ongoing drain on royal income that meant Henry was forced to be creative in his financial dealings. And next week it is these methods Dr Starkey will discuss with the students, using a series of primary documents he has provided. 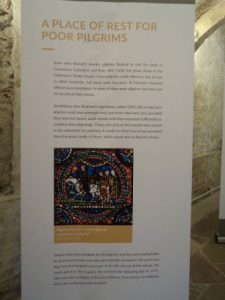 Then as part of the Centre’s work with Canterbury Archaeological Trust, I led two Canterbury Festival walks this week, the first on Monday to ‘Canterbury’s Medieval Hospitals’, the second on Wednesday covering ‘Canterbury Medieval Friaries’. Both walks had sold out which meant that 25 people came with me to St John’s hospital in Northgate and then to St Thomas’ or Eastbridge hospital. Among the things we looked at and discussed at St John’s was the great dormitory building from Archbishop Lanfranc’s original c.1084 construction and how the arrangement had necessitated the contemporary construction of two lavatory buildings, as well as a double chapel because all aspects of the life of the brothers and sisters were separated on the grounds of gender. This was not a problem at St Thomas’ because the poor pilgrims were to be cared for by an elderly woman, according to Archbishop Stratford’s later regulations, and she presumably also cared for the women in childbirth who similarly stayed at the hospital. We also looked at the misericords that had come from Holy Cross church, especially the one which shows a watermill, probably representing the archbishop’s mill at Westgate next to the church. The mill also served as the archbishop’s prison, just like the Westgate was the city’s prison. 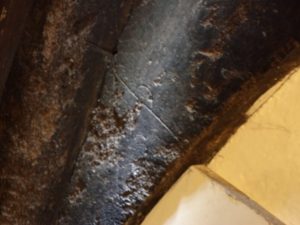 Wednesday saw a similar sized group visit the two surviving buildings of the Dominican friary (Blackfriars) before heading off to the Franciscan friary (Greyfriars), where we again visited the friary’s surviving guest house. As I pointed out, the Dominican building is both larger and finer, a reflection of the different orders, their priorities and ethos. Consequently, it is probably not surprising that the Canterbury Franciscans were one of the houses that became Friars Observants in the later 15th century, that is part of the breakaway group that sought to return to St Francis’ idea of absolute poverty. Our final stop was in the ‘Whitefriars’ shopping precinct because this is all that survives above ground to mark where the Austin friars had their house. Not, of course, that the Austin friars should be called ‘Whitefriars’, that name belongs to the Carmelites, but by the late 16th century this dissolved Canterbury friary was so called and the name has stuck ever since.

Then to round off this week, I visited TS Hazard in Faversham where Rupert Austin of Canterbury Archaeological Trust showed me around this early 15th-century warehouse down by Faversham creek. It is a fascinating building and Rupert has made some exciting discoveries regarding the original building, much of which is intact, albeit there have been some campaigns to change and later restore parts of it. I was especially struck by the different and tell-tale forms of crown post, the evidence of window shutters and the durn form of the original ground floor doorway. I was also fascinated by the symmetry of the building as Rupert showed me where the doors, windows and partitions had been located. Now this may have been solely for practical purposes but equally it may have been due to the medieval desire for balance and symmetry within this important and probably prestigious town building that must have been costly when constructed – an iconic symbol of the town’s place as a maritime trading centre in the late Middle Ages. 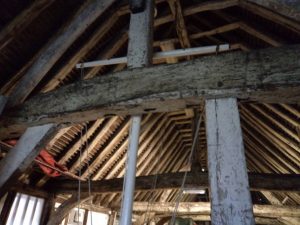 The different form of these two crown posts.

The finally I met up with Dr Rachel Koopmans who is continuing to work on her analysis of the Becket windows. She will be giving a lecture next week to the Friends of Canterbury Cathedral and then in about a month’s time she will deliver this year’s Becket Lecture at Canterbury Christ Church. Thus ended another busy week for the Centre, and next week we have David Starkey’s second master class and Michael Wood’s open lecture on ‘Why the Anglo-Saxons matter’, which coincides with a brilliant exhibition at the British Library on ‘Anglo-Saxon Kingdoms: Art, Word, War’, I know I have seen it! And so has Diane Heath who similarly thought it was excellent.