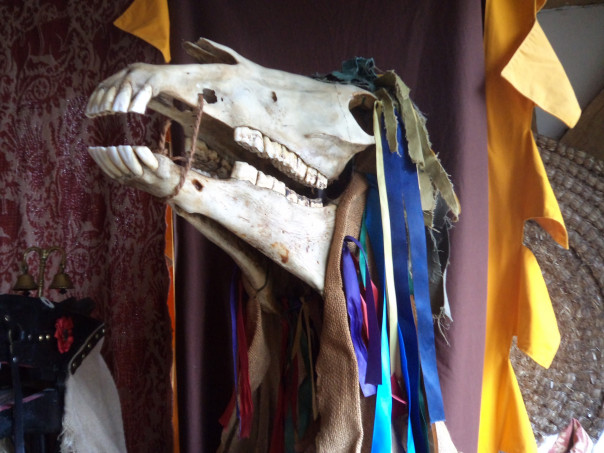 I thought I would start by saying I have been notified that the Tudors & Stuarts 2023 History Weekend (Friday 28 April – Sunday 30 April) website will be live very shortly, I shall be delighted to see it.

For this week, I thought I would reiterate that Dr Sonia Overall’s Hooden Horses project is great, and it had a brilliant start last Saturday when a whole stable of hooden horses and a couple of stags were at the Sandwich Medieval Trust on the Quay Side before having an outing to Worth in the afternoon. Unfortunately, I was only able to be there for the pop-up exhibition in the morning, but Sonia informs me that the rain stayed away for the procession and that there were crowds of people there to see the horses off and on their return – a highly successful day! The next event will be the exhibition at Maidstone Museum, starting on 8 February and running until 17 June.

I have not managed to catch up fully with Dr Diane Heath, but I understand she had a good couple of days in the London archives earlier this week, including finding a ‘new’, that is unknown medieval Bestiary – she is very excited, as well as giving her paper and running a workshop at the Gender and Medieval Studies conference.

Back in Canterbury, Helen Wright, Research Impact Manager, with the CKHH Co-Directors: Dr Claire Bartram and me, as well as Dr Maria Diemling, SHES School Director for Research and Enterprise, have been busy finalising details for a meeting on Thursday 19 January for people to explore the idea of bringing together researchers and research projects on Kent as a shared network. I’ll let you know how this develops.

Before I come to other meetings which have taken place this week, I thought I would mention events that are coming up thick and fast in Canterbury. Thus, we have the FCAT/CKHH online lecture also next Thursday which will be given by Diane on her ‘Medieval Animals Heritage’ project and the role of Green Heritage. Of course, this will involve dragons!

Then on Saturday 21 January it will be the Kent Archaeological Society Fieldwork Committee’s 1-day conference at the University of Kent which will be on ‘Anglo Saxon and Early Medieval Monasticism’. To book, please use: https://www.eventbrite.co.uk/e/kas-fieldwork-conference-2023-tickets-483702175227 Several members of the Kent History Postgraduates will be attending, while others have volunteered to help, a great example of cross-institutional co-operation.

Moving into February, the CKHH will be working with Kent Archaeological Society for Professor Ken Dark’s lecture on Tuesday 7 February at St Paul’s church, Canterbury CT1 1NH. From 6pm with the lecture starting at 6.45pm, this will be a great opportunity to hear Professor Dark’s ideas on the early history of what became St Augustine’s Abbey. For the ‘Mission to England’ project – established and directed by the speaker – that began in 2019, has sought to employ 21st-century archaeological methods to enhance our understanding of the origins and earliest development of the site, building on the contributions of all its earlier investigators. The first part of the project’s work, at the chapel of St Pancras, has already identified what may well be the earliest known ‘Anglo-Saxon’ church building in Britain – and the only one which may have been commissioned, consecrated, and used by the leader of the papal mission, St Augustine of Canterbury. To book your free ticket, please use: https://www.eventbrite.co.uk/e/507463315437

For this week you might say ‘research’ has been the uniting factor, starting with a meeting of medieval historians from Canterbury Christ Church, and the universities of Kent and Southampton, with Cressida Williams from Canterbury Cathedral Archives, about a specific group of records produced by Christ Church Priory. Although still at a relatively early stage in the process of compiling a grant application, we seem to be moving forward quite well and hope to hold our first event this summer. More on this as things progress because such grant writing needs to be done extremely carefully to have any chance of success.

My next ‘research’ element is the online catch-up meeting of the Kent History Postgraduates. One person who would have been there if he and I hadn’t just had a meeting to discuss knowledge exchange and outreach through collaboration between CKHH and KAS was Peter. However, as he next needed to be in Maidstone, he left the Centre’s office in Fynden just as the KHP meeting began. Considering illness has been a major problem for many recently, it was great that seven of the postgraduates were able to join me through Teams. We began our round-up with Kaye who has a new home computer system with two monitors which is proving to be extremely handy when she is transcribing her digital images from the archives. Having recently had a visit to the Kent County Archives at Maidstone, she has begun working on some local churchwardens’ accounts, as well as some Star Chamber records. These sources are proving to be valuable for references to servants, while matters relating to the fixtures and fittings in Pluckley church over the Reformation period are similarly proving to be interesting, albeit some of the handwriting has been quite challenging.

As Maureen said, she has reorganised her thesis plan, placing far more emphasis on the medieval development and then early modern times destruction of the deer parks rather than as part of the history of Tonbridge. She feels this will make far better sense of her archival material, and to that end she has started writing her first chapter. Moreover, she still has some archival sources to examine and she was looking at land title deeds at Maidstone covering land that was turned from hunting grounds to farmland.

Moving to Janet, having received the digital copies of the lay subsidy accounts she had ordered from The National Archives for the Hundred of Ruxley, she has also been exploring those for the Hundred of Somerden. These are much shorter and initially she had expected that they would point towards a similar agrarian and woodland economy. However, she has been finding some significant differences, and she will be giving the group her presentation on these in a fortnight. Consequently, I will stop here but only to say Janet said it will involve wolves and spades!

Grace was at a conference in Edinburgh in December of the theoretical archaeological group where there was considerable focus on natural and cultural heritage, especially the impact of and on climatic factors. She found this extremely informative, and it has been feeding into her review of the histography because she has finished on working on one of her case studies and has yet to start on the next. Thus, she is seeking to find ways to define her key terms and has been unpicking them to get a clearer idea how they may be deployed.

Tracy has been grappling with the university’s postgraduate administrative system which has kept her busy, although she has also had time to work on her next chapter. She is at the data gathering stage, but already is finding interesting land use strategies among her knightly women and their families. Among such uses were deer parks, and Tracey is trying to trace these within the landscape.

Jane, too, has been working on a revised thesis plan, as well as doing some online training courses. Even though she has not been able to complete all of the archival research on her three religious houses, she too is about to start writing in earnest.

As our final person, Kieron is very much at the other end of her doctoral studies. Like others in the group, she has had to take time off for health reasons recently but is now feeling much better. As well as working on her literature review, she has just started a palaeography refresher course and has signed up for a database course in May. She is also taking the opportunity to take part in an online conference at Southampton and has started to collate a list of archival references. Thus, as you can see people have been very busy, even allowing for the Christmas break and various other matters.

Even though there is some overlap, the final ‘research’ topic I’m going to highlight today is the Lossenham Project wills group whose monthly meeting took place this week. Like the Kent History Postgraduates, we had a good online attendance and it was great to be able to report that the virtual exhibition is now on the Lossenham Project website, see ‘Study Day’ as the right-hand top button: https://lossenham.org.uk/ and the new monthly newsletter for January is also up on the website. I was also able to report that the next series of online palaeography workshops will begin soon once I have heard back from a few more people about their availability. We next discussed matters arising concerning the group’s database and whether there were any queries or issues. Generally, this is working well under Sue M and Sophie’s supervision, and they were able to answer some of the queries people wanted to raise.

The largest item on the agenda was a further discussion following on from the last meeting on the group’s way forward. For as well as the core activity of transcribing probate materials and getting the details on the website, the group feels it is important to disseminate their findings more widely. Short newsletter articles are one way, but longer articles (500 to 1000 words) as a series of blogs seems a good way forward. Consequently, the idea is that most people will have a draft blog written by our in-person March meeting with the intention that thereafter they will come out as a series on the project website.

In some ways allied to this, the next way forward is getting involved with Sue H and the Tenterden Museum projects for 2023 and 2024. The group has started on this already, and Sue outlined what has been happening since our last meeting and where group members have contributed. For example, these included Annie’s contacts with the local primary school and their interest in Anglo-Saxon history through archaeology, as well as Celia’s work on the historic persecution of small animals as found in such records as churchwardens’ accounts. In addition, group members suggested other ideas for Sue H on the history of gardens, with special reference to what might have been at Lossenham Priory.

Another idea is to look for complementary document types and to this end Sue M and Rebecca will be visiting the Kent Archives at Maidstone. This provoked a discussion concerning what these might be and among the ideas suggested were household accounts and property deeds. Thus, they are going to have a trawl of the online catalogue first, although the paper catalogues at Maidstone are still very good resources.

All of these ideas are very promising and indicate that the group and its research is in a very healthy position. If this sounds of interest and you would like to think about joining, please do check the Lossenham Project website and/or email me at sheila.sweetinburgh@canterbury.ac.uk we’ll be delighted to welcome you, which only leaves me to say that next week I can see already three meetings I’ll be reporting on as well as Diane’s talk next Thursday, and just maybe Tudors & Stuarts 2023!