From Hooden Horses to Tudors & Stuarts – exciting events in 2023.

From Hooden Horses to Tudors & Stuarts – exciting events in 2023. 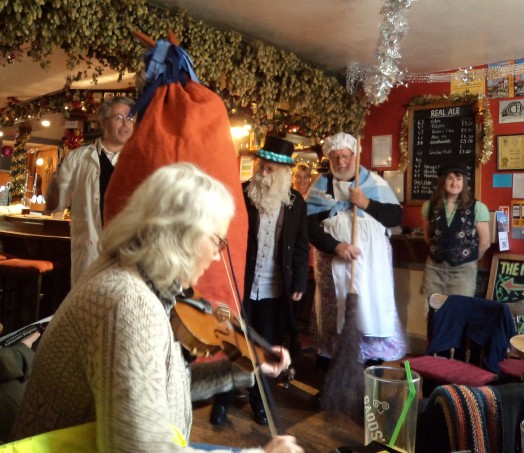 Because this event is coming up at the weekend and Dr Sonia Overall has asked us to flag it up on the CKHH blog, I thought I would start with the ‘Hooden Horse Day’ on Saturday 7 January which will be taking place mostly in Sandwich. For those of you who use Facebook, this has the day’s events: https://fb.me/e/2xZYvBKfQ

This event is part of a larger, collaborative NHLF- and Arts Council-funded project with Sonia as the lead from Canterbury Christ Church and partners including Maidstone Museum and the Sandwich Medieval Trust. Called ‘Celebrating the Kentish Hooden Horse’, there will also be an exhibition at Maidstone Museum between 8 February and 17 June entitled ‘Animal Guising and the Kentish Hooden Horse’. For those who don’t know about the Hooden Horse, it is part of an east Kent folk tradition, albeit probably only from the early 18th century that initially was linked to performances over the Christmas period. Indeed, I met such a Hooden Horse a few years ago at the New Inn in Canterbury at just that time as part of a Mummers play, the tradition having been revived in the mid-20th century after it disappeared about the time of the First World War. These days they have infiltrated west Kent and don’t just confine their outings to mid-winter. For those seeking more information, the definitive study was produced by Percy Maylam in 1909 called The Hooden Horse.

As in previous years, CKHH will be continuing to work with a whole range of external groups and organisations from Canterbury and Rochester Cathedrals and various parish churches to the Maison Dieu in Dover, Maidstone Museum, the Friends of Canterbury Archaeological Trust, Kent Archaeological Society and the Universities of Kent and Southampton, as well as the Lossenham Project and the Canterbury Festival.

Moreover, before I start on what’s coming up, I thought I would mention that as the chairperson of the KAS Publications Committee, it gives me great pleasure to say that there was a very strong and larger than normal field of applicants this time for the Thirsk Prize for the best MA dissertation on a Kent history topic. However, there can only be one winner and, even though Sophie Ogilvie was a close runner-up for her dissertation on the spiritual economy and the relationships it engendered inside and outside the cloister of West Malling Abbey, the first prize goes to George Knight. His dissertation on ‘The ‘Great Cartulary’ of Christ Church Priory: Manuscript, Muniments and Memory’ offers a reassessment of DCc/Register E which was produced under the direction of Prior Henry of Eastry. As one of the judges commented, this is “very well-written, a mature piece of work and a well-researched thesis.” He is “a bold man to take on some of the major names in medieval history, past and present”. Both Sophie and George completed their MA at the University of Kent under its MEMS taught degree programme, and they are continuing to be active researchers: Sophie is heavily engaged in the Lossenham Project wills group among other activities, and George, having successfully completed an internship at Canterbury Archaeological Trust, is now employed as a researcher for a firm of archaeological consultants.

Looking ahead, the CKHH, due to the generosity of a sponsor, is able to part fund a MA by Research on landscape history, centred on the parish of Nonington. The project entitled ‘Evolution of a downland landscape: Nonington 700–1400’ will give the postgraduate student an opportunity to explore a good corpus of charter and other documentary materials, as well as evidence from archaeological and topographical work as part of his/her research agenda. This is a fascinating area which offers someone the chance to investigate the creation and development of rural estates in the Kentish countryside during a crucial period of history. If you are interested or know someone who might be, please contact sheila.sweetinburgh@canterbury.ac.uk and we can discuss your ideas.

Moving on, rather than trying to list everything, I’m going to select one event per month just to offer a flavour of what’s going to be happening up to the end of April. For January, I thought I would use Dr Diane Heath’s talk to the joint online monthly FCAT/CKHH lecture where Diane, on Thursday 19 January will be speaking about ‘The NHLF Medieval Animals Heritage Project: Green Heritage and Wellbeing’. As she says, her project focuses on east Kent medieval history and heritage concerning flora and fauna. For animals “are good to think with” (Claude Levi-Strauss), similarly understood by medieval churchmen such as St Anselm and his kinsman Honorius Augustodunensis, who used creatures to be bearers of emotional, moral and spiritual meanings. Indeed, Honorius wrote a book of sermons for Christ Church Priory linking animal traits to illustrate the life of Christ, including one where Christ is likened to the scarlet phoenix. By bringing aspects of medieval history and heritage to life, Diane and her team, including student volunteers, are seeking to engage with children with special needs and their families to find new ways of beautifying places and spaces, as well as bringing new stories to life from medieval sources.

In February the Centre will be working with Kent Archaeological Society because Peter Joyce, the KAS Outreach and Events Officer, who is also a doctoral student and member of the Kent History Postgraduates group, will be bringing Professor Ken Dark to Canterbury. Professor Dark’s lecture, on Tuesday 7 February at St Paul’s church (between the Burgate and the old St Augustine’s Abbey cemetery gate), is entitled ‘Mission to England: reinvestigating the origins of St Augustine’s Abbey’. Thus, he will be drawing on his recent published research where he argued that the earliest parts of the chapel of St Pancras date from between 597 and 609, which means the building was constructed and used by St Augustine himself, a pivotal time in the ecclesiastical history of the English church.

Then to March, when with MEMS at Kent, the CKHH will be working with Cressida Williams at Canterbury Cathedral Archives on the ‘Church, Saints and Seals, 1150–1300’ study day in the cathedral precincts on Saturday 11 March. As well as presentations by Professor Markus Späth, Drs Lloyd de Beer, Philippa Hoskin and Paul Dryburgh, there will be visits to the archives and conservation studio. Booking and further details: https://www.canterbury-cathedral.org/what-s-on/events/11march23-church-saints-and-seals-1150-1300/ are available here.

For April, the Centre is delighted to be again hosting its History Weekend and this time it will be Tudors & Stuarts 2023 from the evening of Friday 28 April to mid afternoon Sunday 30 April. Yet again we have a brilliant group of speakers and because I have been informed it should be up on the website next week, I’ll wait until then to let you know about the 23 events – talks and guided visits that will showcase topics under the headings of ‘War & Politics’, ‘Kings & Queens’, ‘The Church’, ‘Books & Manuscripts’ and ‘Social History’.

Next week, too, will see Diane at the Gender and Medieval Studies annual conference in London, and meetings of the Kent History Postgraduates group and the Lossenham Project wills group, as well as a meeting of the Centre – all in all a busy start to the year!