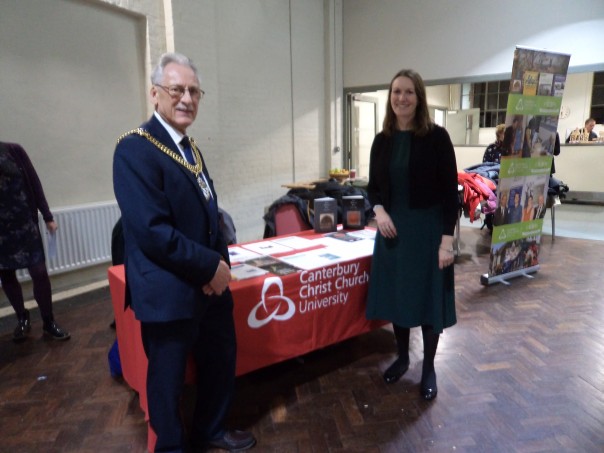 This week has brought a series of meetings and the chance to be part of Canterbury Society’s celebrations.

This week has largely revolved around meetings, which hopefully will lead to exciting developments involving those from the Centre, and our presence at Canterbury Society’s 10th anniversary celebration at the Westgate Hall. However, before that I just want to mention briefly the London Medieval Society colloquium that Dr Diane Heath and I attended last Saturday on ‘London and Thomas Becket’. Like Canterbury, London will be holding a series of events next year to mark Becket 2020 because Thomas was born in London and the London connection lasted well beyond the archbishop’s death in 1170. Indeed, Professor Caroline Barron, the premier expert on medieval London, will be speaking on this topic on Sunday 5 April as part of the Medieval Canterbury Weekend 2020.

Last Saturday Caroline chaired the various presentations and I just thought I would run through the various topics and speakers to give you an idea of the breadth of scholarship on display. We began with Dr Sarah Salih’s (King’s College London) fascinating exploration of the narrative about Thomas Becket’s Saracen mother, which can be found in the Southern English Legendary. Produced in the second quarter of the 13th century, this text offers interesting ideas about the exotic in relation to saintly figures within hagiography, as well as ideas about the fame of London – this Saracen lady successfully crosses much of Europe as she travels from her home in search of Gilbert Becket knowing only two words to guide her: London and Becket.

Following Sarah was Dr Elizabeth New (University of Aberystwyth) who provided a very interesting assessment of several seals from London institutions that feature St Thomas in some form or other. Thus, yes, there were seals showing Becket’s martyrdom, as is also seen, for example, on Canterbury’s medieval civic seal, but on others it is the saint in a Christ-like pose seated on a throne, blessing the citizens of London and holding an archbishop’s staff.

Keeping with the idea of material culture and the iconography surrounding Becket, Elizabeth was followed by Eliot Benbow (Queen Mary’s London and the Museum of London) who discussed the wide range of pilgrim badges that are thought to relate to St Thomas of Canterbury. He then took this a stage further by considering the resemblance between these tokens of St Thomas and contemporary toys and how these may have been made and sold in London. Whether such objects were for sale on London Bridge is not known, but the medieval bridge certainly had plenty of shops, and, more importantly for this conference, it had the chapel of St Thomas. This chapel and the oblations it received was the subject of Emmamarie Haasl’s (doctoral student from the University of Michigan presently studying the bridge chapel records in London) presentation, but just before that Dr Katherine Emery (King’s College London) discussed two early versions of a secular song about Becket. The earlier of the two versions from the late 12th century, known as ‘Hali Thomas of Hevenriche’ (in a Winchester College manuscript), is extremely interesting because it is in a Kentish dialect and it would be great if it could be revived for a Becket 2020 event in Canterbury. Finally, the day was rounded off by Dr John Jeffreys (University of York) who looked at the hospital of St Thomas of Acre which was located at the east end of Cheapside.

Moving back to Canterbury, this week Professor Louise Wilkinson chaired possibly the final planning meeting of representatives from across the city who are organising or involved in a broad range of events in and around the city next year for Becket 2020. Very shortly details of all of these will be on the Becket 2020 website, hosted by the cathedral, so do please keep a lookout for this. Among the events organised by the Centre or in which it is heavily involved are the Medieval Pageant in early July, which will feature giants as in previous years; the ‘Church, Saints and Seals’ conference in May, and the linked exhibition and series of evening lectures over one week from the August Bank Holiday until the following Saturday on ‘Kentish Saints and Martyrs’. The idea is that the exhibition will run for three weeks at Eastbridge Hospital and the lectures will take place in the middle week. We are presently putting in place internships for some of the MA Medieval and Early Modern Studies postgraduates to work on preparing the text and images next term for this display. Consequently, next year should be very exciting and promises to have an exceedingly wide range of events and activities for all ages linked to the Becket theme in some way.

The other meetings recently have been associated with putting together bids for funding through a variety of national bodies, including Wellcome and the AHRC, in conjunction with other universities. These are at various stages of completion, so I’ll only mention them in broad terms but even if they aren’t successful – the odds these days are far from good because of the intense competition – such collaboration is valuable in its own right. Although Louise will be the lead CCCU academic for the Wellcome bid, the topic also comes within Dr Leonie Hicks’ and my area of interest, which meant that we all met up with Professor Jackie Cassell (Brighton and Sussex Medical School) to devise a strategy that will involve CCCU.

Similarly, for the AHRC project the lead academic is from elsewhere and this potential three university project meant that I travelled to Reading University on Tuesday to meet up with the others. From my perspective this is an extremely exciting development in which we can also involve Kentish partner groups and institutions from outside academia. Moreover, it has the potential to feed into other projects in Kent, especially those envisaged as part of developments in Dover, but again more on these as things take shape.

Closer to Canterbury, I attended a planning meeting about events for the commemoration of the founding of the Sir Roger Manwood almshouses in St Stephen’s Hackington to the north-east of Canterbury. As well as a talk that I’ll be giving, the event on Saturday 9 May 2020 will involve a short play, and it was the first reading of this new play that took place on Wednesday evening. It was extremely interesting to be present and to hear both the reading and the comments afterwards, and I think this will be an exciting undertaking that will be greatly enjoyed in the church by those attending next May.

Coming back to the 10th anniversary event for the Canterbury Society, like many other societies and organisations in Canterbury, including Canterbury Archaeological Trust, the Centre had a display in the Westgate Hall that included notices and posters about our forthcoming events, many in conjunction with other organisations; flyers for the Medieval Canterbury Weekend 2020; a list of articles published by members of the Centre and some examples for people to look at; copies of Early Medieval Kent, 800–1220 and Later Medieval Kent, 1220–1540, also involving Centre staff; publications for sale, including copies of Canterbury: An Illustrated History, and flyers about the Canterbury historic map project. The stall was staffed by Louise, Professor Jackie Eales and me, and it was great to witness the Society’s presentation of their annual heritage award to Paula Spencer chief executive and manager of the community centre at Thanington, with a second special award this year going to the leader of Canterbury Society, Professor Jan Pahl. Indeed, the whole event was an excellent reflection of the good work done by Canterbury Society for the city, and for the Centre, too, it was extremely valuable publicity. Thus, it has been a busy but productive week on a variety of fronts.