For the last four days, History and the Centre at Canterbury Christ Church has hosted the Gender and Medieval Studies conference under the overarching theme of ‘Gender, places, spaces, thresholds’. Dr Diane Heath, the organiser, has been brilliant and the appreciative audience has been treated to a veritable feast. Live tweeting is now the name of the game and if you want to get a flavour of what has been happening, please tap into #GMSPlaces

In addition to a wide range of topics covered in a total of twelve sessions as well as three plenary papers, the delegates were treated, and I cannot stress this enough because it produced a standing ovation, to a performance of Dr Daisy Black’s one-woman dramatization of the Bayeux Tapestry. It is exceedingly difficult to capture the spell-binding nature of this hour-long performance in photos, so I have only included one here, but if you do have a chance to see it, do make sure you take the opportunity because you will not be disappointed. Her use of the images in the margins of the Tapestry – birds, animals, peasant farmers and others, to tell and also expand the story of events told by the Tapestry makers was very imaginative, not least because she drew out the moral ‘message’ and situated it in 1066 and in 2016 – a nice touch! 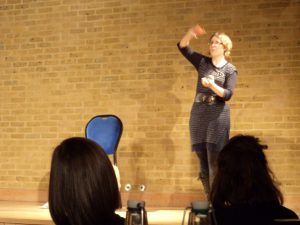 As I mentioned, those who are into tweeting can see what happened using the link above but for other readers I will just mention a few of the papers I attended. In terms of speakers from Canterbury Christ Church, unfortunately I had to miss Dr Leonie Hick’s plenary yesterday morning because I was at a Kent Archaeological Society committee meeting in Maidstone. Her topic was ‘In and Out of Place: Gender and Landscape in Norman Chronicles’, and the people I spoke to later in the day expressed their admiration for her scholarship and the insights she had brought to the topic. However, I did managed to hear Dr Michael Bintley on the Thursday afternoon when he discussed the nature of Anglo-Saxon towns, both in the physical landscape and how they were represented and used by contemporary poets to explore ideas of community in an urban or proto-urban setting. As he showed such ideas were not uniform, and in terms of gender, he demonstrated the fascinating contrast between ‘Judith’ and ‘Andreas’. Readers of the blog may remember a more detailed report on Mike’s analysis of the latter poem from several months ago. 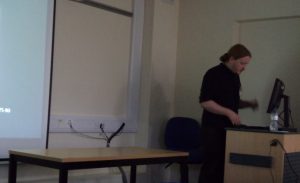 One of the other plenary speakers was Professor Anthony Bale from Birkbeck, University of London, and he provided an excellent analysis of the medieval pilgrimage experience in Bethlehem in terms of spatial dynamics. Focusing on the Campus Floridus, a liminal space in what is probably now Manger Square close to the Cave of the Nativity (beneath the sixth-century and later remodelled church), he examined the narrative of its naming and meanings for a ‘pilgrim’ audience, both those who had physically made the journey and those who would have heard or read about it in texts such as Mandeville’s Travels. The rich symbolism of the rose, associated with both the Song of Songs and the Virgin Mary, as well as other biblical events and certain female saints provided Anthony with a way to explore the meeting of West and East; and Christianity and Islam, not merely as a binary but as part of a diverse mix of sects and cultures.

Turning to the various sessions, I’ll mention those that I attended which were chaired by two of Professor Louise Wilkinson’s doctoral students. The beauty of the itinerant Gender and Medieval Studies conferences is that they are invariably friendly and are thus an excellent place for postgraduates to chair sessions. Furthermore, Harriet Kersey and Abby Armstrong will be running their own conference in early April this year and the experience gained this weekend will be exceedingly useful. Their conference is on ‘Family and Power in the Middle Ages’ and more details are available at: http://www.canterbury.ac.uk/arts-and-humanities/events/family-and-power-in-the-middle-ages.aspx 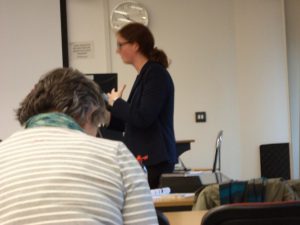 The international session Abby chaired on Friday morning brought together enclosed gardens and Scandinavian grave goods as viewed through the lens of material culture. Firstly, the audience heard Rachel Delman (Oxford University) discuss how enclosed gardens, real and imagined (in text and embroidery), were used by elite women to create and maintain female networks, extending ties of friendship, kinship and conceivably hierarchy between ‘the lady’ and her servants. The second paper was delivered by Santa Jansone, from the University of Latvia, who drew on the archaeological excavations at Grobina that have uncovered a wide range of objects from early medieval graves. Many of these grave goods have posed problems regarding gender issues because they do not fall into easily distinguished differences between male and female. 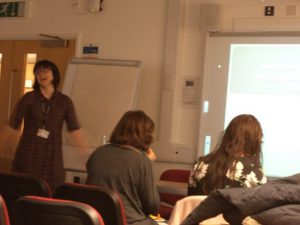 Like Abby, Harriet was due to chair two sessions but I only attended one of these being in the parallel session on the two occasions. Harriet chaired the appropriately named session ‘Nuntastic!’ that brought together three scholars from the universities of York, Oxford and Warwick. Dr Victoria Blud (York) gave the audience certain insights into the remarkable archive that has survived for one of the post-Reformation English recusant communities, the Benedictine nuns at Cambrai. Even though as always there are the tantalizing references to now lost works, it is clear the nuns knew of and used medieval texts such as those by Julian of Norwich, Richard Rolle and Bridget of Sweden. This fascinating pater was followed by Dr Philippa Byrne’s (Somerville College, Oxford) assessment of the three-way relationship among the leprous nuns of St Mary de Pre, their founder the abbot of St Alban’s Abbey and that abbey’s chronicler, Matthew Paris. In particular, Matthew Paris’ desire to characterise the traits of a ‘good’ versus a ‘bad’ abbot apparently did nothing for the status of the nuns, and, even if he was not hostile towards them, his attitude was certainly ambivalent. Louise Campion gave the final paper. She also draw on texts by Bridget of Sweden, especially the Middle English translation of Liber Celestis, and its use of the idea of houses and homely spaces, something that would have appealed to nuns but also to elite laywomen.

As well as organising all the various sessions, Diane Heath provided participants with the opportunity to visit the Canterbury Cathedral Archives and Library. Among the treasures on display in the library were The Nuremberg Chronicle (1493) showing a witch carried off by the Devil, and from The history and antiquities of the Cathedral Church of Canterbury the illustration of Henry IV and Joan of Navarre’s tomb to highlight the queen’s choice of paintings to adorn her and her late husband’s tomb. In the archives, Cressida Williams showed the group the Accord of Winchester that includes among those who made their cross King William I and Queen Matilda. Also on display was a charter issued by the nuns at St Sepulchre’s in Canterbury, the nuns’ seal depicting Jerusalem (the Holy Sepulchre), and a bestiary, the manuscript open at the folio showing the bear with marginal notations. 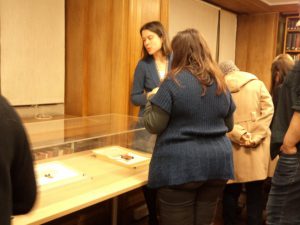 Another first for this conference was the chance ‘to walk the Labyrinth’ in the gardens of St Martin’s Priory this morning. About half the group joined Leonie Hicks while the rest stayed with Diane and used the finger Labyrinths provided by Leonie. I should note here that Sonia Overall created the Labyrinth last year for the University and she had given Leonie the finger version – if you are interested please see: http://www.soniaoverall.net/publications/attachment/priory-labyrinth-cccu-2016-small/

This exercise proved fruitful for the round table discussion that followed which drew out many of the themes that had occurred over the previous few days. Perhaps not surprisingly the resultant response had much in keeping with Clifford Geertz’s idea of ‘thick description’, especially appropriate for a conference on places, spaces and thresholds.

Finally, for those in and around Canterbury who would like more on the Middle Ages, do please come to the Becket lecture on Thursday at 6pm in the Powell Lecture Theatre [Pg09]. For those seeking more details on Dr Paul Webster’s topic please look at: http://www.canterbury.ac.uk/arts-and-humanities/events/arts-and-humanities/ckhh/eleventh-annual-thomas-becket-lecture.aspx