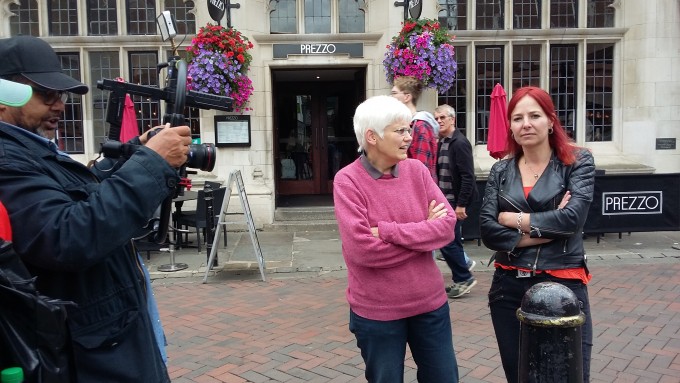 Before I come to a short report on one of the conference speakers from CCCU at today’s conference, I want to note a few matters that occurred earlier this week and what was a very busy day yesterday. So, beginning on Monday, Dr Diane Heath and I met up with the marketing organiser at The Canterbury Tales visitor attraction in Canterbury to discuss further the ‘Education Day’ that is again taking place in September. As readers of the blog may remember, Diane last year ran several workshops for primary schoolchildren where they designed their own medieval tile. This was a great success: https://blogs.canterbury.ac.uk/kenthistory/young-medievalists-and-medieval-animals-in-canterbury/

The idea this year is to design shields – thereby linking to Canterbury Castle, and is an activity that has been very popular in the past at the ‘Medieval Pageant’ in July. 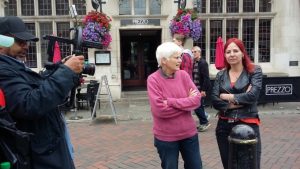 Talking of the ‘Medieval Pageant’, preparations are well advanced for the Pageant on Saturday 6 July this year, and, on this occasion, Louise Wilkinson will be heading a group of students and other helpers at St Paul’s church. So far, we have been very lucky with the weather, but Louise decided we might be pushing this yet again and it would be fun to run our family-friendly activities in a medieval building for a change. Also, from a logistical viewpoint, St Paul’s church is much closer to CCCU than the Westgate Gardens, and we will be sharing the space with Annie Partridge, Education Officer at Canterbury Archaeological Trust. Louise and I went for a site meeting this week and we think this will be a great space because now that St Paul’s has chairs not pews, it is far easier to create a lovely open area. Annie is thinking of bringing the Trust’s ‘Little Dig’ as well as various medieval artefacts for people, including children, to handle, which will complement CCCU’s activities.

Nor were these the only matters that took place earlier this week because I had a meeting regarding the essay collection on ‘Maritime Kent through the Ages’, which seems to be coming on well – more information as things progress; and there was a master class on Wednesday, led by Professor Rekha Pande and attended by staff and postgraduates. 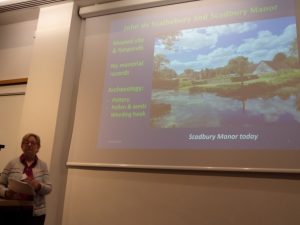 However, it was yesterday that was the busiest day of the week because there was a CCCU medieval history panel (all formerly or currently supervised by Louise Wilkinson) at the University of Kent’s MEMS Festival 2019 which I was able to attend, as well as delivering my own paper in the previous session on ‘Crossing the Channel: immigrant artisans and traders in 15th-century Canterbury’. In this session was another CCCU postgraduate. Janet Clayton is known to regular readers of the blog because she is a member of the Postgraduate Kent History group, and she is working on the Hundred of Ruxley in north-west Kent (Orpington and surrounding area). Initially, she had been studying the area throughout the Middle Ages, but latterly she has concentrated her efforts on the 14th century because there is an exceptionally detailed lay subsidy for the hundred from 1301. Having introduced the audience to the potential of this source, especially when placed alongside the archaeological investigations she has been involved with at Scadbury and its neighbourhood, she looked at two individuals: John de Scathebury and Reginald Herleson because they have offered her ways of exploring the role of livestock farming in the area. As she pointed out, the use of mixed plough teams (oxen and horses) was becoming more common and, even though there is no evidence of large-scale dairying – more the ownership of a house cow, the considerable number of tanners in neighbouring Dartford may have benefitted for being able to buy these Ruxley Hundred hides. Similarly, Janet looked at the likely increasing role of the wool trade in early 14th-century Ruxley, and for more on this, please see: 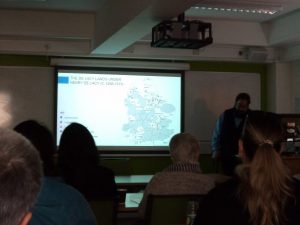 Andrew considers the de Lacy marriages and the lands acquired

Turning to the panel entitled ‘Marriage and Female Agency’, the first speaker was Andrew Connell who has just had his viva for his doctorate and is finishing off his thesis for the final time. Andrew has worked on the de Lacy family and its role in the north-west (they were Constables of Chester) and in the east midlands (as earls of Lincoln). For his paper he explored how this great baronial family had enhanced their position in the country, both as estate holders and at the Angevin court, through shrewd marriages. This not only involved the marriages of the male family line to important and wealthy heiresses, but also through the marriages of female members of the family – daughters and sisters who brought alliances through share geographical and political interests. Furthermore, such alliances were at times enhanced through patronage of monasteries and other religious institutions, family members apparently working together as what might be described as a co-operative under its male head to ensure that, if possible, each succeeding generation was able to enhance the de Lacy status and wealth. Indeed, such was their success that the family by the later 13th century was one of the greatest in England, allowing them to be major players at the royal court and thus in the governance of the country.

The second paper was given by Rebecca Jarvis who is studying the lesser barony and knightly families of Lincolnshire and Kent. As she said, these families were not in a position to wed their sons to sole heiresses, rather they looked to co-heiresses as a means to increase their landed position and wealth. Furthermore, some of these families had their roots in mercantile activities, succeeding generations marrying the sisters and daughters of minor aristocratic families as they sought to build influence locally and regionally, just as the de Lacys were doing regionally and nationally. 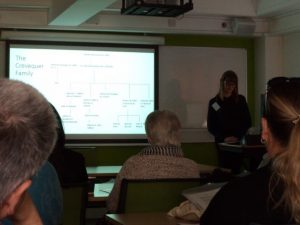 Rebecca assesses whether women were pawns in the marriage market

As you might expect considering the young age at marriage of these girls (as well as the boys), it is hardly surprising that Rebecca sees such marriages gave no female agency to these young brides, meaning that they were pawns in the hands of their fathers, uncles and sometimes even brothers. However, it is probably worth remembering that often this was equally true for the boys. Like Andrew, Rebecca provided a number of genealogical charts to illustrate the role marriage played in the fortunes of ‘her’ families, and it was interesting to see the complex networks that were built up by these families over several generations.

Even though marriage negotiations might be said to have been at the heart of Dr Abby Armstrong’s paper, she was using a very different approach and type of evidence to examine the role of gift-giving and patronage in the negotiations and subsequent married life of Beatrice, daughter of Henry III. To explore this topic, Abby had turned to Beatrice’s mother, looking at Queen Eleanor’s jewel account for the period 1256-1264. Again, as readers of the blog will know (please see: https://blogs.canterbury.ac.uk/kenthistory/medieval-queens-anglo-saxon-saints-and-a-roman-fort-another-busy-week/ ) this account featured in her doctoral thesis and she is currently writing an article on its use as an expression of female royal power and agency. For, as an expression of “how to win friends and influence people”, notions about gift-giving, reciprocity and patronage have developed considerably since the work of Mauss, and such giving is increasingly understood to employ sophisticated, complex and powerful ideas and messages to donors, recipients and witnesses alike. In this particular instance it is rings that were medium involved, and, as Abby discussed, the type and value of the ring, and timing of such giving and re-giving (Beatrice was given rings so that she could distribute them on to specific persons) were important strategically for the queen and royal family more broadly. 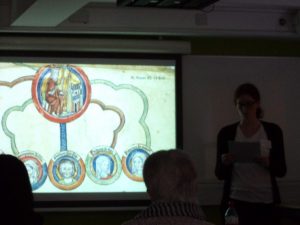 As you can imagine, this session was well received by the large audience (as had been the case in Janet’s session) and all the speakers were asked questions about their findings. Consequently, there was a considerable buzz around the place as people filed out afterwards and these conversations were continued over the lunch break.

It was at that point that I had to leave to get down to Canterbury Cathedral Lodge for the afternoon session of the ‘Pilgrim Workshop’, organised by Green Pilgrimage: Interreg Europe, with backing from the Kent Downs group, the Confraternity of Pilgrims to Rome and the Heritage Lottery Fund. I was the first speaker in the ‘Engaging with Heritage along Pilgrimage Routes’ session, introducing the audience to pilgrim hospitals. Thus, having outlined briefly what was a medieval hospital and highlighted that pilgrim hospitals were one of four types of English hospital in the Middle Ages, I looked at the evidence for Kent. Due to the limited time available, I concentrated on the four major pilgrim hospitals in the county: working from west to east – St Mary’s at Strood, St Mary’s at Ospringe (‘Maison Dieu’), St Thomas’ at Canterbury (Eastbridge), and St Mary’s at Dover (‘Maison Dieu’). If anyone is interested, they feature in: The Role of the Hospital in Medieval England: Gift-Giving and the Spiritual Economy (Four Courts: Dublin, 2004) and within Kent’s medieval hospitals more widely in: Later Medieval Kent, 1220–1540 (Boydell: Woodbridge, 2010). 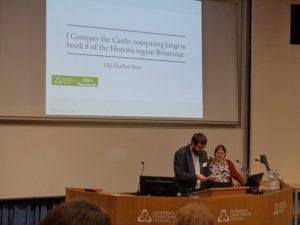 Dean Irwin introduces Lily and her paper on Hengist’s ‘burial’

This brings me to this afternoon and Lily Hawker-Yates’ paper at the ‘Negotiating Power’ conference. In keeping with the ideas of negotiating power through using the past, she discussed Geoffrey of Monmouth’s Historia rerum Britanniae in relation to his narrative about the death and burial of Hengist ‘under a heap of earth’ ie a pagan barrow next to what would become Conisborough Castle. She sees this as Geoffrey deploying the idea of authoritative, ancient (British) history (the text he is drawing on) and the landscape with its natural and man-made features, again having power due to their antiquity, as a means to construct the past to comment on the present. Her special interest is the deployment of barrows, but this has led her to explore concepts of how medieval writers, especially clerics/monks saw it as appropriate for them to offer commentaries on kingship, good lordship and the dangers of such matters as usurpation. This is an exciting idea and if it looks interesting please see: https://blogs.canterbury.ac.uk/kenthistory/hengist-medieval-jews-and-tudors-and-stuarts-2019/

Indeed, all the papers in this session were fascinating, as was the final keynote given by Professor Guy Halsall on how early Merovingian leaders – royal and ecclesiastical, negotiated power and identity spatially and through matters such as clothing and other possessions. Consequently, I was sorry to have missed the earlier part of the conference, including Professor Barbara Yorke, the other keynote speaker.

Finally, I thought I would just mention that ‘Plantagenet Canterbury’ is being shown on Channel 4 this evening as part of their second ‘Historic Towns’ series, coming as it does a couple of weeks after it was Dover’s turn in relation to the Second World War. Amongst the featured items and people are Leonie Seliger (Head of the Stained Glass Studio at Canterbury Cathedral) and Professor Rachel Koopmans (York University, Toronto) who last summer was working with Leonie on one of the Becket Miracle Windows, please see: https://blogs.canterbury.ac.uk/kenthistory/canterbury-pilgrims-and-anglo-saxon-cemeteries/ .