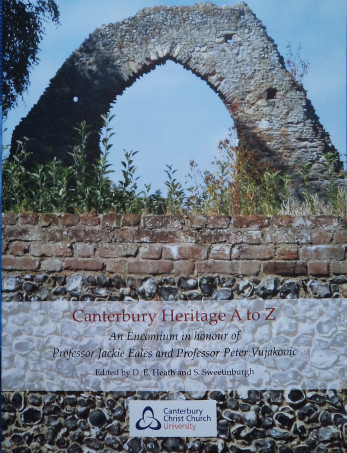 The Centre’s blog is back! I’ll be featuring the Kent History Postgraduates Group shortly, but first I thought I would give you some news and highlight what the Centre’s team have been doing recently.

To begin, Dr Claire Bartram, as one of the Centre’s Co-Directors, has just had notification that she has secured a grant from the Canterbury Historical and Archaeological Society towards publication of several information banners for the Centre’s ‘Kentish Saints and Martyrs’ exhibition at Eastbridge, with an accompanying lecture series, as part of Becket 2020. Like Becket 2020, which has become Becket 202/21, the ‘Kentish Saints and Martyrs’ exhibition and talks in the city’s churches has had to be postponed – the lectures should have taken place next week, but will be back with the exhibition this time next year circumstances permitting. Consequently, this has not stopped Claire and Stephanie Barnes, a postgraduate student, with help from the Centre team from working on these pop-up banners. Thinking thematically these banners will feature saints from St Augustine to martyrs from both sides of the Reformation divide in the sixteenth century to consider ideas about how and why we think about people in this way. Among those featured will be well-known saints, but also those who are far more obscure, thereby highlighting the diversity and rich tapestry of Kent’s medieval history that is still of major interest today. Furthermore, from their lecture summaries we know that our speakers in September 2021 will explore similar ideas, as well as providing fascinating studies about a wide range of Kentish saints and martyrs from their research.

This is not the only collaboration involving the Centre and Canterbury organisations. Dr Diane Heath and I have been working with Bethany Brown, another postgraduate student, on a series of information banners for St Mildred’s church next to Canterbury Castle. Like Stephanie, Bethany has been busy this summer researching and writing on different aspects of the church’s development over time and the activities of its late medieval parishioners in the life of their church. Drawing on Diane’s design expertise we now have seven pop-up banners (currently in Diane’s dining room) that will be presented to the Rev. Jo Richards and St Mildred’s when conditions permit – hopefully in September, for display in the church for parishioners, Canterbury residents and visitors.

Of course, these are not the only exhibitions the Centre has produced and some of you may remember the very well-received ‘Medieval Faversham’ exhibition that Diane, Dr Harriet Kersey and I produced a couple of years ago. This took place at the town’s Heritage Hub near the marketplace and also involved several ‘Young Medievalists’ workshops – another feature of Diane’s many talents. Indeed, the ‘Kentish Saints and Martyrs’ exhibition was similarly due to involve a couple of ‘Young Medievalists’ workshops, which we hope will now take place next year.

Additionally, and in conjunction with Cressida Williams of Canterbury Cathedral Archives and Library, the Centre was heavily involved in devising the Eastbridge Hospital pop-up banners that tell the story of the hospital as a charitable institution over time – from its foundation by Edward son of Odbold in the late twelfth century to its place as an almshouse today. Again, the information banners work thematically, featuring different aspects of the hospital’s various charitable roles, including the arrival of corrodians (those providing a fee in cash or kind to stay there long-term), and poor schoolboys, some of whom gained scholarships at Corpus Christi College, Cambridge – a link that still continues to this day.

To provide access to these various exhibitions more widely, part of the ‘Medieval Faversham’ exhibition is on the Centre’s website. And we are grateful to Matthew Crockatt for putting it up: https://www.canterbury.ac.uk/arts-and-humanities/research-kent-history-and-archaeology/crkha-latest-projects/medieval-faversham.aspx . We now hope to add to this and will be asking Matthew to put up the ‘Eastbridge Hospital through Time’ exhibition, that on ‘St Mildred’s – church and people’, and once completed that for ‘Kentish Saints and Martyrs’. Furthermore, now that Professors Jackie Eales and Peter Vujakovic have each received their three copies of the Canterbury A – Z with additional pages, we will be asking Matthew to similarly add this to the Centre’s webpages. This encomium in honour of Jackie and Peter equally illustrates Diane’s design talents because it is an attractive booklet. Once we can get on to the CCCU campus and hand over copies of this limited edition to Craig in the CCCU bookshop, we hope he will be able to sell them (discount price of £5 for contributors, others £7.50). If you are interested, please do contact him to reserve a copy because only a small number are available and they are great!

As I said before, this week marked another meeting of the Kent History Postgraduates Group, and we almost had a full house because only Lily was missing and Maureen was there for most of the time until she experienced internet problems. However, it was very unfortunate because we lost contact just before she was due to provide a summary of what she has been doing for her research, but from earlier conversations it was clear that she has been back into the archives. This is interesting on various of counts because she explained that archive centres were following different practices. For example, on the question of face coverings, a bit like the government messages archives are somewhat mixed. Consequently, she had to wear one when working at the Society of Genealogists’ archive in London, but not at the Kent History and Library Centre in Maidstone where only two researchers are allowed to book for a specific morning or afternoon slot. As Maureen said, this had made her feel quite comfortable with the arrangements, and similarly the ideas relating to quarantining the manuscripts before and after they are to be consulted by the researcher. This provoked quite a discussion on matters of risk, especially for those in households where someone needed to shield, both in terms of conditions in the archive itself but equally getting there, especially for London archives.

Turning to Janet, she has been continuing her exploration of the thirteenth-century built environment of Ruxley Hundred. This involves secular as well as ecclesiastical buildings, and uses standing architecture, archaeological reports and documentary sources because none of these are anything like sufficient on their own. Even though Dr Kate Weikert looks at Authority, Gender and Space in the Anglo-Norman World, rather than slightly later in time, Janet has found her ideas very interesting. She discovered this book through Dean, yet another example of the fruitful exchange of knowledge and ideas coming through this Group.

Keeping with Dean, he is busy editing his thesis, as well as finishing off a final chapter that will be done by mid-September. In part this timetable has been reliant on access to sources, but he is busy making the most of printed Jewish records. He is currently focusing on Lincoln and Nottingham due to the national context of those indebted to the Jews there, this is in contrast to Canterbury where it was generally people further down the social scale.

Although not necessarily exactly the social group Tracey is focusing on – members of east Kent knightly families, some of Dean’s Canterbury debtors would probably fit the bill. Tracey is continuing to explore Professor Nigel Saul’s ideas on medieval noble families and their piety, and how far her Kentish evidence does or doesn’t fit his findings from elsewhere. She, too, has been hampered by the closure of national and county archives, relying instead on printed and online primary sources. These have been helpful but do not cover all she needs, and in particular she wants to get to the British Library and Canterbury Cathedral Archives and Library.

Jane has similar issues. Indeed, her position is even more problematic because of certain health issues involving herself and close family members. Consequently, she is continuing to work on the PCC wills downloaded from TNA and will abstracts from the Kent Archaeological Society website, but really needs access to Maidstone for probate materials from Rochester Consistory Court and the Shoreham Deanery. However, the Culpepper family are looking interesting as benefactors of Bayham Abbey, and incidentally the group got very interested in the Bayham Abbey beech tree which is one of the contenders for ‘Tree of the Year’ for 2020.

The final member of the group this week was Peter. At the moment he is working on a project involving both Canterbury-based universities, but as far as his research is concerned he is seriously thinking of developing a topic from his Masters for a doctorate that looks in far greater depth at Rochester diocese in terms of Poor Law provision and workhouses, the role of clergymen, especially the Rev. Caleb Parfect, the SPCK and the Anglican Church during the long eighteenth century. This is very exciting, and we wish him well.

This brought our meeting to a close and hopefully next time we will have Maureen and Lily, and I think Jacie may be back, too.