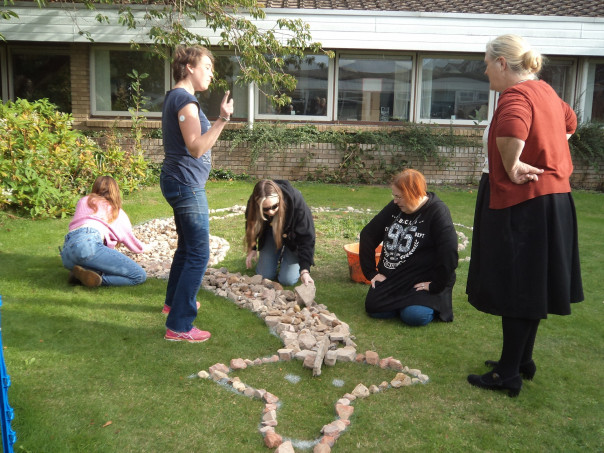 We have a joint event with the Friends of Canterbury Archaeological Trust (FCAT) on Thursday this week when Martin Crowther, the Maison Dieu Engagement Officer, will discuss the fascinating history of this amazing medieval building and ‘Gothic fantasy’ and explain what is happening in terms of the exciting Heritage Lottery-funded project ‘to breathe new life into this historic and iconic building’ and ‘how the building is being made accessible’ as part of ‘the ambitious activity plan to bring in new audiences’. The talk starts at 7pm in Old Sessions, Canterbury Christ Church University and the usual conditions apply, so do come along if this sounds interesting.

I am going to return to the Maison Dieu in a minute, but I want to start with the presentation of the Lawrence Lyle Memorial Prize for the best Taught Masters dissertation by either a Modern History or a MEMS student. This year the prize has gone to Rose Pressnell for her study on Countess Matilda of Canossa (1046–1115) and her role in the evolution of the crusades. For this she was supervised by Dr Leonie Hicks who commented that it is an excellent piece of work and is a very fitting way for Rose to complete her MA programme. Having taught Rose on a couple of modules, I would definitely endorse Leonie’s comments. Consequently, it was great to be able to present the prize, and because it is a book voucher for use at the CCCU Bookshop, it seemed highly appropriate to make the presentation there beside the medieval books.

This prize fund is an extension of the financial support from the Ian Coulson Memorial Postgraduate Award fund provided to students at CCCU studying Kent history and archaeology topics for higher degrees. As mentioned in previous blogs, this award fund is generated from donations from individuals and charitable foundations, as well as from the surplus generated by the Centre’s annual History Weekends after speakers’ and other expenses and central university costs. Among the recipients this year is Kieron Hoyle, who having undertaken a Masters by Research on the Crypt School in Gloucester while working for Christ Church in Educational Studies as a trainer of secondary school history teachers, has now begun a full-time doctorate on early modern Dover. She is being supported financially by The Janus Foundation, working through the Ian Coulson Fund, and her project, like that of Jason Mazzocchi, a new part-time doctoral student similarly aided in this way, is associated with the ‘Kent’s Maritime Communities’ project. This 3-year project is also funded by The Janus Foundation and is a collaboration between Dr Craig Lambert of the University of Southampton, with Dr Robert Blackmore as the Research Associate, and me at CCCU. Kieron’s project will explore the development of the Maison Dieu under the Tudors from after its time as a medieval pilgrim hospital through to its role as a victualling yard that was part of the changes at Dover involving the new harbour works under various monarchs. To facilitate her project which will consider relations between the town and the Crown, in addition to Dover’s position vis-à-vis English Calais through the Maison Dieu and the town’s harbour, Kieron is getting involved in the Dover Maison Dieu project with Martin Crowther. Furthermore, as a great communicator and well as a committed researcher, she has already been engaging in outreach work as part of the Kent Pilgrim Festival and other events.

To mark the beginning of this exciting doctoral project, Dover District Council will be issuing a press release, organised by Kevin Charles, following Kieron’s recent visit to the Maison Dieu. Additionally, Jeanette Earl, the Media Relations Manager at Christ Church, will publish the link to the press release on the university’s news page and put it out on the university’s social platforms. I’ll add the link to the blog when I get it and this is one of the photo’s Martin took when Kieron was at the Maison Dieu.

Keeping with the CKHH’s involvement with The Janus Foundation, and Lossenham, there was a project team meeting at Sandgate involving the three archaeologists from Isle Heritage (Andrew Richardson, Annie Partridge and Paul Armour), Russell Burden, the project’s artist in residence, Rebecca Warren and me. The archaeologists provided a summary of the excavation on the site this summer, the team from Isle Heritage again supported by a group of very keen and able volunteers who came from various parts of Kent and East Sussex. Even though the conditions, such as the extreme heat, were very challenging the results were excellent and have provided answers as well as posing more questions about the friary and earlier settlement. For some of these results, please see the project’s website: https://lossenham.org.uk/ and more information will become available in the monthly newsletters. We also discussed a range of other issues, including the highly successful Study Day in September to which Russell had contributed two banners among his way projects this year, the ongoing work of the wills group, and the experimental work on the pottery kiln, thereby making it a productive and useful meeting.

On a different note, next I just want to mention that Drs Pip Gregory and Diane Heath were again working with volunteers on the baby dragon sculpture in Becket garden this Wednesday. The day also marks the final changeover concerning the NHLF-funded ‘Medieval Animals Heritage’s project’s managerial structure due to Penny Bernard having to step down due to health issues, her role now split between Pip and Martin Crowther. So Penny all at CKHH wish you a speedy recovery to full health.

Finally for this report this week, I thought I would mention that the details for the Tudors & Stuarts 2023 are now with Kellie Hogben in Arts and Culture to build the ticketing side of the website, while the other part of the website will be created by the Marketing Services team, that is by Matthew Crockatt and his colleagues. The remainder of the necessary paperwork is with the Financial Services team and hopefully we’ll have the necessary codes soon to allow us to start on the publicity. So you may be wondering what will be on offer at the History Weekend on Friday 27 April 2023 to Sunday 30 April, and the answer is an exciting range of speakers in what I think is a great programme. For example, on the Friday we will be starting with Professor Catherine Richardson’s ‘Experiencing life in the early modern house’, where she will explore what we know about how spaces were used in the 16th and 17th-century house and how these differ to our own times.

On the Saturday we will be welcoming Professor Jessica Malay who will tell us about the early life of Lady Anne Clifford who spent her formative years at the courts of Queen Elizabeth I and the early Stuarts. Jessica will consider the influence of her mother Margaret Countess of Cumberland and her aunt Anne, Countess of Warwick. We will also ‘meet’ her father George Clifford, whose voyages to the Americas and his other seafaring activities are often overlook but which make him as exciting a figure as Walter Raleigh.

Keeping with the Americas, Professor Alec Ryrie will examine the taking of the Protestant religion to the New World, as well as to the Caribbean and Near East. He will consider what problems this early Protestant mission faced and what such a failure reveals about the period as a whole.

Returning to court culture, Professor Maria Hayward will discuss the world and life of Nell Gwyn under the title ‘Dressing, undressing and cross-dressing: Nell Gwyn’s life in (and out of) clothes’. This promises to be fascinating for Maria’s talks are always great, and this time we will learn about Nell’s use of objects from household furnishings to her sedan chair as she sought to create a space for herself in Restoration London society.

Moving to Sunday, Dr Maria Diemling from Canterbury Christ Church, will consider what Jews ate in early modern times. Among the topics she will examine are the Jewish love of garlic and how the increased use of cutlery had a major impact on many European cuisines and how the Jews negotiated such matters as they sought to maintain their distinct ethno-religious identity.

The role of diversity will be a theme for both Drs Rebecca Warren and Onyeka Nubia. Rebecca will discuss the emergence of radical sects in the 1640s and 1650s where we will meet Ranters and others, which will allow her to explore how and why people took up the offer of alternative religious practices during this brief widow before the return to Anglicanism at the Restoration. Oneyeka will offer a consideration of how to understand England’s past, where he will critically examine evidence for diversity and explore ideas of English identity.

All being well, the website and booking pages will become available by December and hopefully the History Weekend will be well supported as we again seek to raise further funds to aid postgraduates through the Ian Coulson Award fund.