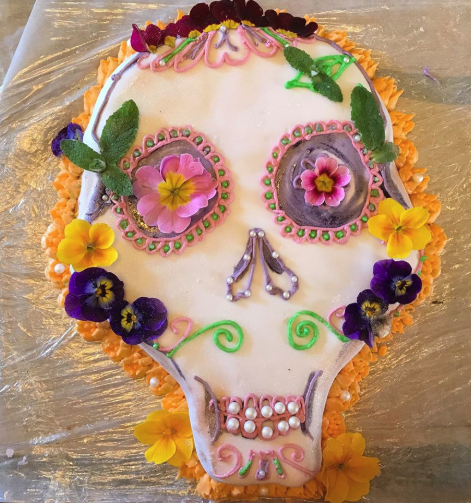 I am, for my sins, a conference person. I organise, speak at and attend many mental health conferences every year. But this week, I went along to Pushing Up Daisies, a ‘community-grown festival’ around death and dying, in the beautiful Yorkshire market town of Todmorden. I came away reflecting that we need to rethink some of the conversations we are having around mental health.

What does a standard mental health conference look like? Sometimes they reach out to a discrete audience – nurses, for example, or critical psychiatrists. Other times, and usually less successfully, they invite a mixed crowd, trying to bring together people from different sections of mental health. There will be speakers, the wisdom being that big names will pull in punters and sell tickets. There are often workshops and ‘break-out’ spaces for discussion, coffee breaks for gossiping and catching up, and sometimes the pub afterwards to hang out and do a post-mortem. After a while, they can become cosy, energising and familiar.

A conference usually has lofty aims, attempting to address ‘change’ in mental health, or ‘the future’, or ‘reform’ – or something vast like the Mental Health Act, the theme of an event I recently organised for Hearing Voices Network England. Most of them sell tickets to cover costs (and sometimes, to bring in income), and whilst some have bursaries, many of them are not financially accessible to people on a low income.

At most mental health conferences I attend, I see familiar faces. I cherish this, as, for me, reconnecting with friends and allies is an important function of these events. It also tends to be the same speakers, plucked from a small pool. They’re usually excellent, otherwise we wouldn’t keep on asking them, and when I hear them share their passion and wisdom from the podium, I clap loudly. There are so many people in this room clapping, I sometimes think change must be just around the corner. But, in parallel, I often have a niggling doubt- is anything actually going to change because of this event? And on my way home, I wonder who we were talking to, and if, perhaps, we were only talking to ourselves.

Pushing up Daisies felt very different. It isn’t a conference, for a start. They don’t invite ‘experts’ to speak- I emailed them to ask if I could come along. No one is paid, only minimal travel expenses are reimbursed, and everything is free, on a donation-basis. It was conceived and is run by a group of local volunteers. The aim is to start conversations around death and dying, from practical sessions around wills, to creating space to honour the unborn, to making a memory quilt. They organise ‘the Last Post’, where you can send letters to those people in your life who are no longer alive. The unread letters are then given a send-off with food, wine, and fire. I ran a comparatively conventional workshop, on how to support someone who wants to die. Who came along? I’d like to say service users, practitioners, and family members/carers, as I’m so used to categorising participants in my head in a kind of conference taxonomy. In fact, it was just people. A few worked in mental health, yes, but they were all local people who were somehow moved to attend a workshop about suicide.

And why not? Suicide has been the preserve of mental health for a while, and it’s hard to have a conversation around it without resorting to mental health campaign slogans (“It’s good to talk”) or deference to mental health expertise (“please talk to your GP if you need help”). But many of us have thought about ending our own lives. Some of us have lost people to suicide, or have sat with a friend who wants to die and tried to hear their pain. Suicide is part of the fabric of our lives, in the same way that suffering, love and death are- and perhaps it is time to reclaim it from mental health.

During the workshop, an end of life doula spoke about her work, and described bearing witness to people as they approached death. I was struck by the parallels between her words and the Hearing Voices ethos, and our shared values of honouring people’s voices and stories, holding space, sitting with pain and uncertainty, and walking alongside someone. Would she have been invited to a mental health conference to share this wisdom? I’m not sure. And yet, there is much that we, in critical mental health, could learn from those working in palliative care and their battle to de-medicalise dying and death.

We talk a lot about community-based solutions and alternatives. I’d like to start thinking about creating community spaces where we can talk. Not talk about ‘mental health’, just talk about the difficult stuff. Some people are already doing this. Anne Cooke and John McGowan, through Skeptics in the Pub and Discursive of Tunbridge Wells, have organised talks in local pubs. Problem Solving Booths and Camerados are trying to create spaces for people to connect with each other and have these conversations, and disrupt the helper/helped dyad. The Radical Herbalism Gathering is a collective that brings together a wide range of people interested in social justice and radical approaches to healthcare, in a nurturing and politically active setting. Compassionate Mental Health is a gathering, not a conference, and one of its purposes is to provide a space for people to connect and heal.

If we want to create radical change in mental health, I believe we need to actually step outside of mental health – and we need to stop just talking to ourselves. We may always need our tribe, our community, our conferences, but let’s also reach out to others. Let’s seek out people and communities who are not doing ‘mental health’ -not to teach them about mental health, but to learn from them, so that their work can challenge, inform and enrich ours.

Akiko Hart is the Chair of ISPS UK, a Committee Member of the English Hearing Voices Network and the Hearing Voices Project Manager at Mind in Camden. She has previously worked as the Director of Mental Health Europe. Her research interests include critical suicidology, psychosis and dissociation. You can follow her on Twitter @AkikoMHart