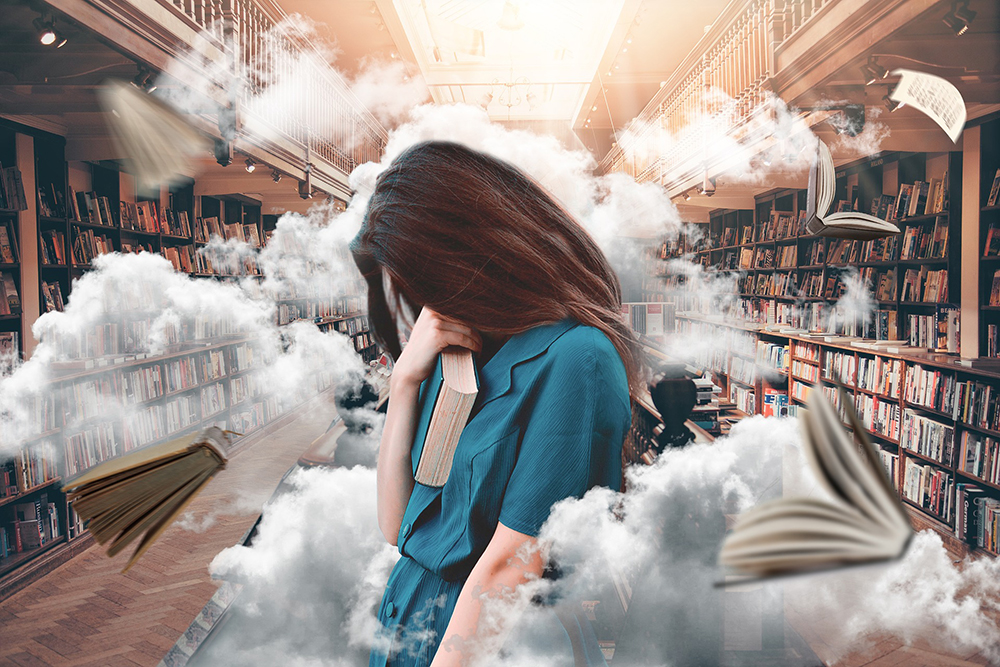 On Saturday 21st September, Canterbury Christ Church University welcomed its new cohort of MA Creative Writing Students. As part of their library induction students were challenged to write a story set in a library. Here is Helen Atkinson’s story:

‘This,’ said the Minister for Education, pausing to ensure that all were listening and that his words would have maximum impact on his audience, ‘is a Good Library.’

The Head Librarian allowed her shoulders to drop slightly and her mouth, previously contorted into clown-like rictus, to relax into a more natural smile. The official visit had been a trying day for her, starting early with the grunting security detail marching through the stacks, snooping suspiciously through Politics as though they suspected subversives of hiding out in between the movable shelves They had hauled out the over-sized Art books and her shoulders still ached from re-shelving hefty copies of The Romantics that they’d left upside down on the carpet – revolutionary ideas were obviously dangerous. Then there was the pre-visit from the Principal, to ensure that his most recent publication was carefully displayed on every floor and the endless academics popping in to scatter their books on the returns trolleys – evidence of a healthy borrowing rate.

The Head Librarian had only had time to grab a quick coffee and prime her staff before the official Ministerial party arrived, ready for their tour. She’d slipped on her best jacket, scribbled a line of lipstick in the general direction of her mouth and put on her bravest face, ready to impress.

A full hour of enforced politeness later, her patience was wearing thin. She’d had to accompany him, his greasy aides and bored members of the press from the ground floor to the third, listening to his endless anecdotal monologue and answering his occasional inane questions. But it seemed that she, and the Library, had passed the test. Perhaps he wasn’t so bad after all. He’d noticed her well-sorted shelves, the impeccable adherence to the cataloguing system, the solid banks of text books and periodicals and the helpful signage throughout. His approval was given.

‘What makes this such a good Library, Sir?’ asked the journalist from the local press, desperate for a story.

‘Well,’ the Minister replied. ‘Whenever I visit a school or university Library, I always make straight for Fiction, and straight for the F section.’

Throughout the room, brains mentally ran through bookshelves, exam texts, bestseller lists for inspiration – Faulkner, Fitzgerald, Forster, Flaubert? The local journalist, a big fan of the fantasy genre, allowed his mind to wander for a moment to Raymond E Feist and imagine the Minister for Education spending his evenings adventuring through the worlds of Midkedia and Kelewan after a hard day’s work with the red boxes.

The Minister paused for dramatic effect, pleased that he had the attention of everyone in the room. ‘And’, he continued. ‘I look for Fielding. Every educational library must contain Henry Fielding and, if I find him there, I know that I am in a good library.’

He beamed condescendingly at the Head Librarian. ‘You have here copies of Tom Jones, Jonathan Wild, even the lesser known Adventures of David Simple, so you obviously know what you are doing. Though really,’ another pause, and the Minister’s face fell, just as it had done when he’d announced the latest cuts last week, ‘Really – the absence of Shamela is something that I would advise you to correct as soon as possible.’

The Head Librarian did not reply at first. She was unsure how to respond to the view that her beautiful state-of-the-art library, with its helpful staff, its abundance of resources, its width of vision, had finally been judged on the presence of a seventeenth century satirist with a gouty leg. Then, as though her hand was detached from the rest of her body, she reached towards a nearby shelf, grabbed the Complete Works of Henry Fielding and smacked the Minister for Education on the back of the head.

The Sergeant shook his head as he walked her past the Library’s extensive DVD loan collection, to the waiting police car outside. What else could you expect from a place where there were no fewer than six copies of Fritz Lang’s M on the shelves?

The story, all names, characters, and incidents portrayed are fictitious. No identification with actual persons (living or deceased), places, buildings, and products is intended or should be inferred.