Blistering Barnacles and Thundering Typhoons – The Language of Captain Haddock 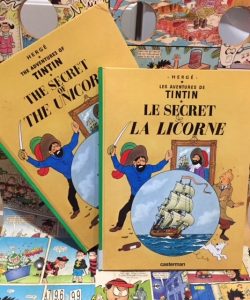 Anyone who has read the Adventures of Tintin by Hergé will have no doubt enjoyed the strange but colourful exclamations and bizarre insults hurled by the irascible and often inebriated Captain Haddock at his foe, phrases such as “blistering barnacles” and “thundering typhoons”. But where did these quirky phrases come from and do they have any historical precedent?  Using digital resources at Canterbury Christ Church University Library, I set out on my own adventure (minus wire fox terrier) to find out.

Firstly, I decided to do a bit of Googling and took a peek at the Wikipedia article (but shush don’t tell anyone!) The comic books were originally written in Belgian patois between 1929–1976 but the first story translated into English was ‘King Ottakar’s Sceptre’ which appeared in Eagle magazine in 1951. Seven years later, Michael Turner and Leslie Lonsdale-Cooper began translating the series of 24 comic books for the publishers Methuen. I wanted to know more about these men and decided to follow up some of the material cited in the Wikipedia article.

I discovered an interview with the translators at Tintinologist.org in which they discussed the problems they encountered translating the stories into English, not least the fact that they had to adapt the text to make sure that it fitted into the text balloons. It never occurred to me that this might be a problem and that direct translation was not possible. The exclamations and insults had to inhabit the same space on the page, as in the original.  In the English translation of The Secret of the Unicorn, Captain Haddock exclaims “Blistering barnacles to that pirate Red Rackham, and his treasure!” In the original version he says “…Et tant pis pour le trésor de ce gredin de Rackham le Rouge.” The French phrase is 62 characters (including the spaces and ellipsis), the English is 66, occupying a similar if not exact space in the speech bubble. Phrases therefore were chosen for size, but this was not the only reason.

To learn more about the process of translation, I decided to look at the original French stories. I knew that my knowledge of French was a bit rusty so I would need a good dictionary. Collins Robert and Larousse are considered two of the best, and you can find them at classmark 443 on the second floor of Augustine House, but I wondered whether an online dictionary could do the job. Google Translate is a translation tool that uses a database of frequency of word pairs between two languages. It is not recommended as a tool for translators as its translations are often awkward and literal. For the sentence cited above, it gave a translation of: “And too bad for the treasure of this rascal Rackham Red.” It was a word for word translation, which gave me the gist of the sentence, but not a natural language equivalent.  I wondered if I could get a more natural translation by using other sources. Linguee https://www.linguee.fr is a free dictionary which shows language in context so that you can fully appreciate the nuance of a sentence. After searching for examples of “tant pis” in various translated sentences, I decided that maybe “So much for that rascal Red Rackham’s treasure!” might sound a little more natural as a translation. At 47 characters it fell short of the original 62 characters in the French version.  Zut, zut et zut (or Blistering barnacles!)  I needed something to fill the gap! I began to understand how hard Turner and Lonsdale-Cooper had worked to produce their translations. Unlike me, they didn’t have the benefit of the Word count dialog box tallying the character count for each phrase, but had to do it by eye. It could take the duo anything up to four hours to translate one page.[i]

In The Secret of the Unicorn, Captain Haddock continues by saying of Rackham’s treasure “I’d sooner do without it.” In the original version he exclaims “Je préfère y renoncer, mille sabords!” A Google translation of this phrase is “I prefer to give it up, a thousand ports” Linguee was able to supply me with some clues. A sabord is a gun port, or a port hole, not a dock or wharf as I had imagined when I had seen the Google translation.  The phrase “mille sabords” has been translated as “Yo ho, yo ho!” in Linguee but I was not satisfied with this as an answer. It seemed to be an exclamation expressing disappointment or annoyance when used in Tintin, rather than a seaman’s chant.  I thought “Shiver me timbers, I’d sooner do without it!” might be more in keeping with the nautical theme. However, my choice of hackneyed phrase would have failed to give the translation a true sense of the richness of the original language. Turner and Lonsdale-Cooper’s unique and amusing translation of “mille sabords” as “blistering barnacles!” gave Tintin a whole new appeal for its British audience. The Belgian boy became almost quintessentially English!

There is also a metaphorical meaning in the translation. A ship covered with a thousand port holes can be seen as analogous to a ship covered in small round barnacles. As thousands of barnacles on a ship can cause drag, they could be said to ‘blister’ or damage the efficiency of a ship. Haddock uses the expression “mille sabords” several times in The Secret of the Unicorn. At one point he exclaims “Mille millions de mille sabords” which Turner and Lonsdale-Cooper translate as “Billions of blue blistering barnacles”. You may wonder why they used the phrase “blue blistering barnacles”, as barnacles are neither blue nor cause blistering. At this point, I could start talking about blue mussels clinging to rocks, and add in a few more theories but if I’m honest I think it’s simpler than that. I believe Turner and Lonsdale-Cooper wished to stay faithful to the alliterative quality of the original sentence.They worked closely with Hergé and these phrases reflect their desire to create a beautiful translation that remained faithful to the humour displayed in the original.

Another example of the use of alliteration is in the phrase “Thundering typhoons” which replaced the original phrase “Tonnerre de Brest”. Many theories about the French phrase abound on the internet. It is said that it could refer to a common French cliché that Brest experiences more stormy weather than the average town or to the thunderous roar of cannon fired from the Brest Arsenal.  By searching Google.fr you will find a Wikipedia article in French all about the phrase. It cites three possible origins: one to a huge clap of thunder in Brest in April 1718; one to the daily firing of the cannon at the Brest Arsenal at 6.00 am and 7.00 p.m.; and a third to the use of the cannon to warn the people of Brest about escaping prisoners.  Whatever the definition of the phrase, it is as nebulous as “thundering typhoons”.  A term frequency search across the Gale Primary Sources, a database of 17th, 18th and 19th century news sources available via LibrarySearch reveals that the exclamation “Thundering typhoons!” was probably an invention of the translators, presumably for its dramatic sonorous effect.  One could argue that the phrase is in keeping with the colonial geopolitics which pervade the stories, and reveals the depth of understanding of the translators for the author and the world that he is conveying in his fiction. You can read more about “Identity and geopolitics in Hergé’s Adventures of Tintin” in an article by Oliver Dunnett available via Taylor and Francis journals on LibrarySearch.[ii] 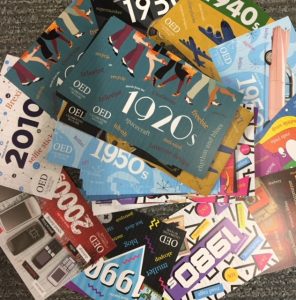 I decided to use the Oxford English Dictionary (OED) online via LibrarySearch to investigate some of the other words used in the English translations. The Oxford English Dictionary is an authoritative source for word etymology as it shows examples of words in context and attempts to establish derivations and earliest known uses of words. In Prisoners of the Sun, Haddock calls his foes “Slubberdegullions!” It is defined in the OED as a slobbering or dirty fellow, a worthless sloven.  The earliest reference to the word is found in 1612, although other internet sources suggest that its origins date from 16th century Holland or Germany. [iii]

If you want to know more about word usage over time, you can search a corpus or body of texts. By searching the Early English Books Online Corpus https://www.english-corpora.org/eebo/ I was able to discover the phrase “thou hast deserv’d, base slubberdegullion, to be serv’d as thou didst vow to deal with me” used in Samuel Butler’s 1663 work Hudibras. I was getting the sense that the word was not in everyday parlance in the 1950s and was used for its wonderfully onomatopoeic qualities by its very creative translators. I began to wonder more about these wordsmiths and their educational background. I was able to find an obituary of Michael Turner in The Times. (Aug. 4, 2009), available via Gale Primary Sources on LibrarySearch. He was born in 1929 and read English at Trinity College, Cambridge.  He wrote a number of publications about Victorian and Edwardian parlour songs which may explain the comedy, melodrama and musicality of his Tintin translations.

I imagine that the translators enjoyed translating Hergé’s comic books and putting their own English spin on them, just as much as thousands of children and adults alike have enjoyed them ever since.You can find the English translations of Tintin in the Junior Fiction (JF) section of the library on floor two at JF HER and the original French language versions at 741.5 HER. If you would like to find out more about translation or corpus linguistics, there are several books available in the CCCU Library or you can read the Library guide to Corpus software at https://www.canterbury.ac.uk/library/docs/Corpus-Software.pdf