Having had two weeks off, which gave me a chance to write a paper and almost finish an article, I thought this week I would start with a brief reminder about two Centre events in September: the Parish Histories conference and the Michael Nightingale Memorial Lecture.

‘Battle of the Ducks’ at Canterbury

The lead-in to the new academic year is always a busy time, even if you are not teaching much, although it looks like I will pick-up a ‘first’ from my perspective in terms of a lecture for architecture at Kent. For those readers of the blog who live or work in Canterbury, the other thing you will have noticed is the arrival of students, and this has started already with Freshers Week at both universities in Canterbury taking place next week. From my point of view that means meeting the new Medieval and Early Modern Studies Masters postgrads at Kent, especially those who will being doing Paul Bennet and my option on ‘Medieval Canterbury’. At Christ Church this probably will mean trying to make sure all the new History students are aware of ‘The Battle of the Ducks’ lecture on Friday 2 October at 7.30pm (wine from 7pm) in Old Sessions House. Sara Wolfson, an early modern specialist, who is organising the History Induction Week, has promised to tell the students, which is great (many thanks Sara!), and hopefully other members of staff will be doing the same. As I have mentioned before, this is the Nightingale Memorial Lecture and is a joint venture between the Centre and the Agricultural Museum Brook, which some of you may know already. John Bulaitis’ talk on the early 1930s tithe wars looks like it will be a fascinating event and is open to all, so please do feel free to come along and hear about an amazing series of episodes in the county’s history. 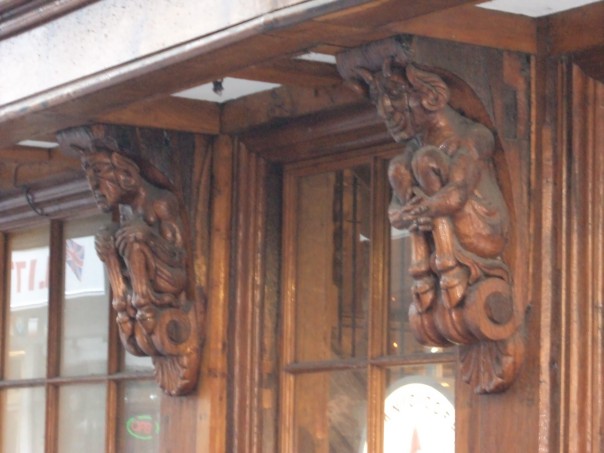 Another 20th-century topic that is potentially going to involve people from Canterbury Christ Church and also Canterbury Archaeological Trust is a proposed project on the history of the port of Richborough. Some details are known about its history and to a degree there is a photograph archive. However more needs to be done and Martin Watts, in particular, has started delving into its documented history at the Royal Engineers, and if all really goes well a funded project may come out of this. This is only one of several leads Martin is following at the moment, as I outlined a couple of weeks ago, and more information will be reported as things progress.

Keeping with this 20th century theme, I just thought people might be interested in the site on the corner of The Parade and Mercery Lane, which is now ‘Pret A Manger’, but longer-standing residents and visitors to Canterbury will remember it as Boots the chemists, before the firm relocated to its massive premises in Whitefriars. The whole history of the building is fascinating but I’ll just stick to these later times. Boots arrived in the late 1920s, taking over premises that had been those of a tobacconist (J. F. Barber & Sons), Mrs Meers’ tearoom (nothing changes although probably much more coffee than tea now) and Thomas Becket, a jeweller. At that time the medieval building was said to be in a very poor condition and in danger of collapse, and when Boots actually came to look at it closely, it was found to be in an even worse state. Nevertheless, rather than demolish it they admirably took the decision to undertake an ambitious and costly restoration. What Boots could not have known at the time, because the scientific techniques and knowledge were then unavailable, is that some of the still existing structure pre-dates the Black Death of 1349, as discovered by Canterbury Archaeological Trust, making it a remarkable survival, albeit very little from this early phase remains.

To return to Boots’ work, the firm’s own architect, Mr Percy J. Bartlett, was responsible for preparing plans which would allow the building to blend into its medieval surroundings. The main contractor was Mr George Browning, a man with extensive experience of work of this nature. Decorative plasterwork, lead work and joinery was undertaken by the Birmingham Guild Ltd. For those interested in the arts and crafts movement of the late 19th century, the Guild’s name is probably familiar because the firm had begun life in the late 1880s as the Birmingham Guild and School of Handicrafts. Those working for the firm in the 1880s and their successors in the 1920s were highly skilled craft workers, and their handiwork, especially the corbels in Mercery Lane, are excellent examples of this artistic craft. However, if you want a piece of genuine medieval carving turn around in Mercery Lane and look at the recently badly-damaged lion’s head on the corner of Mercery Lane and the High Street (about at adult head height). And on that note of the medieval juxtaposed to the modern I’ll finish for this week.