I believe several staff members have been out in the county giving lectures to local history groups during November. Among these are John Bulaitis at Whitstable, Lesley Hardy at Lyminge, Richard Eales at Frittenden and Martin Watts at Shepherdswell, although the latter may be speaking in early December. Such collaboration between those interested and engaged in local and regional history and those involved in this discipline within academia is a very worthwhile development and reminds me of the ‘New Directions in Local History since Hoskins’ conference that I spoke at several years ago at the University of Leicester. Even though there was at times a degree of tension between those advocating these different approaches, the resulting collection of essays underlined the ways each could benefit from the other, as the four editors demonstrated in their introduction and David Dymond discussed in his chapter: ‘Does local history have a split personality?’.

At a recent meeting of several people involved in the Centre here, among the issues discussed was how collaboration between these two constituencies might take place in Kent. In the next couple of weeks there will be a follow-up meeting involving more members of staff, including those from English as well as History, and it is hoped to take such initiatives forward. Martin Watts’ two projects on Richborough and Whitstable definitely fall into this category, as may a possible one-day symposium on researching local history by showcasing the practices of several groups from across Kent and a one-day conference celebrating the publication of Early Medieval Kent, 800–1220, which should finally be out next summer. 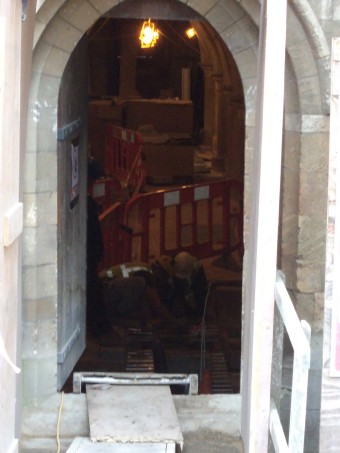 Athough possibly somewhat tangential to these enterprises, I travelled to Rochester on Wednesday to discuss with those at the cathedral the possibility of putting on a one-day study day on 5 October 2016 under the heading ‘Norman Rochester’. This will be a joint undertaking between the Kent Archaeological Society’s churches committee and Rochester Cathedral, and will provide an opportunity to explore aspects of this formative period, especially pertinent because next year will be the 950th anniversary of the Battle of Hastings. At the moment the day is very much in the planning stage, but it was great to meet both Gillian Wilford in the Chapter Office and Graham Keevil, who, as the conservation architect, is in charge of various developments, including work on the crypt. This is a very exciting period in terms of the history of the cathedral, and it was great to be able to hear even a little about this work. As I said this is in the early stages, but we thought following the format used in the past at Hythe and Folkestone sounded sensible, which means it is envisaged that the day will comprise several lectures in the morning and workshops in the afternoon. The study day will probably be based in the newly-refurbished crypt, with the architectural workshop utilising the nave and other parts of the cathedral, while the documentary workshop may be set in the library. The latter is likely to feature the Textus Roffensis, as well as other texts. Again, as at previous study days, the original document(s) will be a display item, under the control of a librarian/archivist, but participants will be encouraged to make their own discoveries about Norman Rochester using photocopies of other relevant texts. Thus the hands-on element will be encouraged, not least because such days offer ways to investigate how to do research as much as actually making new discoveries.

Rochester is an excellent place to consider the Normans in the county because Bishop Gundulf, appointed to the Rochester see in 1077, was an exceedingly talented architect in his own right, and, in addition to his work at Rochester, he was involved in building the great keep at the Tower of London. However in Rochester itself he is probably best known for the cathedral and monastic buildings, begun in 1083, his work on the replacement of the wooden castle with one in stone, and his establishment of St Bartholomew’s hospital on the Chatham side outside the city walls for both lepers, and the poor and infirm. By so doing he was emulating his friend Archbishop Lanfranc at Canterbury, although it is worth remembering that Lanfranc had far greater resources to call upon and thus it is not surprising that with regard to hospital foundations Lanfranc was able to separate the lepers from the poor and infirm, the former at St Nicholas’ hospital, Harbledown, the latter at St John’s, Northgate. Lanfranc’s institutions also housed far large numbers, but St Bartholomew’s hospital seemingly accommodated fifteen brothers and sisters, and Gundulf was also involved in the constructing of a convent at Malling.

Moreover in the cathedral itself Graham and his team are continuing to discover sections of Gundulf’s handiwork that had become lost over the centuries. One of the newest of these discoveries involves a secret staircase, which is excellent except that it is located at the exact place where it was envisaged the lift would be sited. This has meant a change of plan and considerable discussion about where else it can possibly go. Other finds which will feature at the study day are likely to be masonry fragments found during the recent work. Some of these had been incorporated into later parts of the building, but all in all they provide valuable clues regarding contemporary craftsmanship and the availability of particular building stone.

Thus Rochester offers a great means to examine the impact of the Norman Conquest, and it is to be hoped that Early Medieval Kent will definitely be available, indeed may have been for several months, as it too offers valuable insights into this period of the county’s history. Furthermore, even though the Medieval Weekend is six months earlier and is at Canterbury not Rochester, lectures such as those by Professors Richard Gameson and Michelle Brown will draw attention to the importance of the production of religious texts in Kent, both before and after the Conquest. Consequently there is much to look forward to in 2016.

School of Humanities @cccu_humanities RT @bookbound2019: Definitely want to read these - the Von Arnim is calling my name https://t.co/fFw349wYor

h J R
School of Humanities @cccu_humanities RT @Heritage_NGOs: Our fortnightly issue of #HeritageUpdate is out now! We aim to bring our readers all the latest #HeritageNews, #Heritag…

h J R
School of Humanities @cccu_humanities RT @gillianneale1: This series of four short videos by @sarajcharles is super-informative. Fascinating for anyone interested in #book histo…