This week has been a case of looking forward to the new academic year and the School of Humanities’ first intake of Medieval & Early Modern Studies Taught Masters students, some of who have opted to study late medieval and Tudor Canterbury as one of their option modules. This is very exciting and hopefully we will have a very enjoyable time.

I am hoping that Dr Diane Heath and I will also have a very enjoyable time when we welcome four school groups to Old Sessions this coming Thursday. This is part of The Canterbury Tales’ Education Day and at Canterbury Christ Church the students will have a chance to do some ‘etching’ of medieval animals and other designs as we turn them into ‘tile-makers’ during their pre-booked sessions. Diane used the same technique when she ran a workshop as part of the Medieval Canterbury Weekend 2018 last April which was greatly enjoyed by all the participants, and we are hoping for a similar response from the ‘young medievalists’ this time too. I shall report back next week. 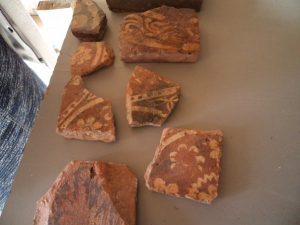 Just to let you know that the ‘Exploring Kentish Naming Practices’ conference on Saturday 17 November, organised jointly by the Centre and Kent archaeological Society, is beginning to attract bookings already. In many ways I am not surprised because as well as the great Dr Paul Cullen, who will be taking about ‘Tavern names on Kent’ and ‘Some tricky Kent surnames’, among the other speakers we have Barrie Cook (British Museum) on ‘Names, trades and places on the tokens on 17th-century Kent’ and Dr Ellie Rye (University of Nottingham) discussing ‘Place-names and travel in early modern Kent’. For booking go to https://www.canterbury.ac.uk/kent-names or call 01227 782994 or email artsandculture@canterbury.ac.uk

As with other Centre events, and this one is in conjunction with Kent Archaeological Society, any surplus funds raised will go towards the Ian Coulson Memorial Postgraduate Award fund. Indeed, successful applicants this summer will be able to receive their Awards at the Nightingale Memorial Lecture on Tuesday 25 September when Professor Peter Vujakovic will discuss ‘The map as biography: maps, memory and the Kent landscape’ – entry is free, no booking required, though there is a voluntary retiring collection. The Lecture will be in Old Sessions House, Canterbury and will begin at 7pm (wine reception from 6.30 pm). Everyone is welcome, and we are delighted that a former Lord Mayor of Canterbury Cllr George Metcalfe will be attending that evening. 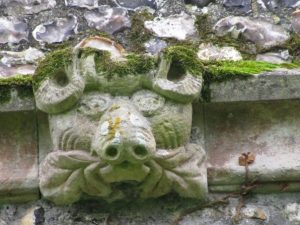 The ‘Green-Pig’ from Wye, Kent

I doubt Peter will be mentioning medieval pigs, but they will be present at the naming practices conference in November, and last night they had their own spot at the first autumn lecture of the season run jointly by the Centre and the Friends of Canterbury Archaeological Trust. Consequently, about thirty people came to find out about medieval pigs, for the pig was a vital source of meat and fat and these prick-eared, long-legged, razor-backed, dark brown and bristly creatures were probably ubiquitous across medieval society. Pig farming in broad terms moved from being extensive to the use of more intensive methods, but the system of pannage does appear to have survived throughout the Middle Ages, at least to a degree. I have mentioned pannage and the deployment of seasonal settlements in the Weald before, which means that this time I’ll look briefly at another aspect of the system and then introduce a recent discovery in the archives by Elizabeth Finn, which is tremendously important in terms of the incidence of seasonal pasturing that involved the movement of pigs – so thanks very much Liz! 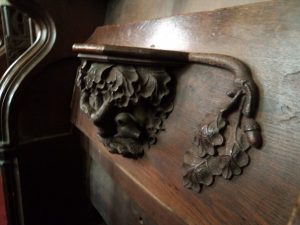 In case people have forgotten, pannage is the use of woodland, especially oak and beech woods, for the autumn pasturing of pigs on acorns or beech mast and it was widespread across early medieval England. According to the 13th-century custumal of the Archbishop of Canterbury’s manor of Teynham, the pannage season comprise seven weeks, from the 21 September to Martinmas (11 November). However, the grazing period was probably much longer, perhaps 4 months, during the Anglo-Saxon period and there seems to have been quite a lot of regional variation.

Yet like any harvest nothing was guaranteed and some years the acorn and beech harvest failed. As you might expect, there was a system in place to compensate the lords for this and if was a fee called dangerium. As with so many of these occasional fees, over time it developed into a fee that was charged on others as well as its original payers, and in this case the men of the dens were also charged when pannage could not be taken – the Wealden settlers saved from having herds of pigs quartered on their lands. 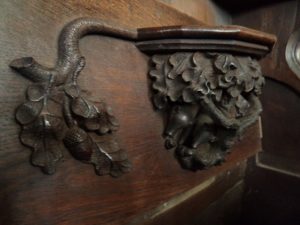 Nevertheless, even if certain years were less good in terms of the availability of woodland food compared to others, the manorial custumals do offer some ideas about how the pigs were moved to these autumn pastures. For example, at Maidstone it was said that ‘certain tenants shall drive pigs to beech mast’, and at Teynham, again, the six cottars were expected to go with the manorial swineherds when the pigs were taken to the woods in the early autumn and then back again, while the cotmen at Wingham were given a horse to carry their food and exhausted pigs.

These are all useful pieces of evidence but relate to the ‘ideal’ or expected rather than possibly the reality, and what I believe is the clinching piece of evidence that pigs were herded and that this was still taking place in the late Middle Ages is down to Elizabeth Finn’s discovery. In a 15th-century manorial account from Bilsington it records that ‘Richard Quntrel and Richard Flemyng were paid 2s 2d for their work and expenses for three days for driving 32 of the lady’s pigs from Bilsington to Bokholte about the feast of the Exaltation of the Holy Cross.’ This is extremely valuable for several reasons. Firstly, it shows autumn pasturing of pigs on beech mast was still taking place in Kent into the 15th century; that pigs continued to be driven from place to place, in this case about 14 miles from Bilsington to Petham [there is a Bukholt Farm at Petham which seems the most likely place], that the autumn pannage season began about 14 September there, that two men were seen as appropriate regarding moving about thirty pigs, and that the swineherds were well paid. 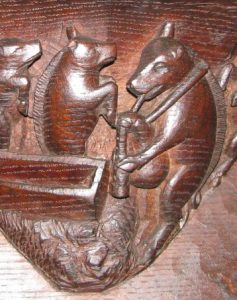 For the second part of my talk I discussed the symbolic pig, especially the bagpipe playing sow, something that I have mentioned in the blog before, and this drew several questions after the talk. Other people were interested in ideas such as the likelihood of the pigs receiving a blessing from the priest before they set out from the home farmstead. Indeed, there was a wide range of questions and I have some ideas to follow up. Thus, it was a very interesting evening and shows that a topic which is well outside most people’s usual repertoire can still generate interest.

Next week I’ll report on the Education Day which also looks very promising, and it is feasible that I’ll be able to give you the short url for the Tudors and Stuarts 2019 History Weekend.