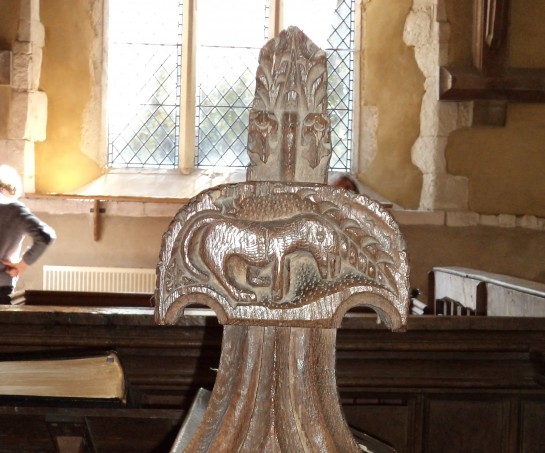 Things continue to be busy and it is now just over a week to the Kent History Federation 1-day conference hosted by the Centre at Canterbury Christ Church on ‘Tudor and Stuart Canterbury’. This conference on Saturday 12 May will feature speakers on the early modern city from both the University of Kent (specifically from MEMS) and CCCU, and this bringing together of academics from Canterbury’s two universities is a great example of cross-institutional co-operation. Moreover, as well as a series of lectures in the morning, there is a range of tours in the city that feature this exciting period in Canterbury’s history. If this sounds interesting, please check out the Centre’s ‘Future Events’ page at: http://www.canterbury.ac.uk/arts-and-humanities/events/arts-and-humanities/ckhh/tudor-and-stuart-canterbury-conference.aspx

Last Monday I went to see Ian Simpson in the CCCU library at Augustine House to gain an idea of what they hold in the archive. Ian has not had responsibility for it for very long and he is keen to find out exactly what is there because as the moment the catalogue is far from complete. There are several literary collections, including one on Elizabeth Gaskill and another on children’s fiction, but what caught my eye were the antiquarian volumes on Kent, as well as several Bibles and other theological works. Ian said he does not know the provenance of some parts of the archive, but the text books and similar from the early to mid-20th century presumably relate to Christ Church’s early years as a teacher training college, while the Bibles and theological books may be linked to the time when St Augustine’s was a missionary college. The reason Ian had invited me was that he is keen to recruit about half a dozen students as volunteers to list what is in the archive and its condition as a first step. Having had a small exhibition in the foyer of Augustine House, he had collected a small group of volunteers, but he is still on the lookout for a couple more. Consequently, any CCCU students who read this blog and think maybe this is for them, please contact Ian, he will be delighted to hear from you. Moreover, if this takes off, Ian may follow Canterbury Cathedral Archives and Library and have a ‘Picture this …’ feature, which for the cathedral is organised by Dr Stuart Palmer (University of Kent) and Dr Diane Heath from the Centre here. These short articles take as their inspiration an illustration that has caught the imagination of the researcher. Recent examples produced by history postgraduates at CCCU include pieces by Abby Armstrong and Janet Clayton: https://www.canterbury-cathedral.org/heritage/archives/picture-this/depictions-of-power-representations-of-queenly-authority-on-the-seal-of-eleanor-of-castile/ 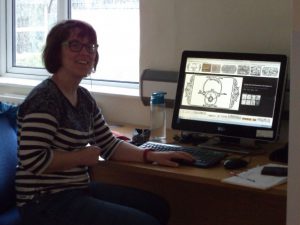 However, these are not the only matters that has been occupying us at the Centre this week and Diane Heath and Harriet Kersey have been very busy finishing off the timeline for the ‘Medieval Faversham’ exhibition that we are hoping will go to press early next week. Due to budget constraints we have trimmed the number of display boards for the time being, but I’m hoping if we can get some more money, as well as digital copies of various Faversham maps owned by the Town Council, we will be able to have a second phase to this exhibition to complement the first. Consequently, as you can see, we had our own mini exhibition in Fynden, where the Centre is based, this week because it is much easier to spot typos and the like when the text is up on the wall rather than reading it yet again on the computer screen. 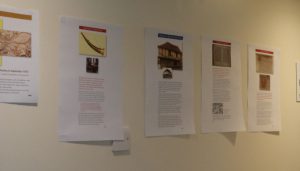 Checking the various notices for the Faversham exhibition.

This exhibition will be a temporary affair in Faversham Town Council’s new Heritage Hub opposite the Guildhall in Faversham town centre. The builders are still in the building, but, when Diane and I had a look through the front window on Wednesday evening, it was clear there had been considerable progress since the last time we had been in the town. The reason we were in Faversham on Wednesday evening was to attend a meeting called by Harold Goodwin of the Faversham Society who is leading the ‘Museums Together Group’. This group has come together to give support for the Stage 1 Heritage Lottery Fund application to create the Heritage Hub, which needs to go in to HLF before the end of May. This is a tight timetable, hence Wednesday’s meeting and another yesterday to gauge the level of active support from Faversham’s museums and associated heritage attractions in the town and hinterland. I’ll leave aside the outline of Harold’s plan, in consultation with two architects who have worked on HLF bids before, until things move on a bit; however, suffice to say it involves digital mapping. 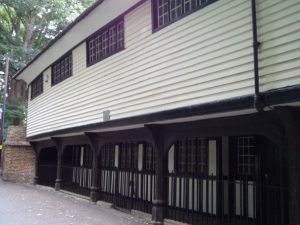 In addition to the Town Council, the Faversham Society and the other museums and heritage organisations, Harold is keen to involve the local universities of Kent and CCCU, and various schoolchildren – from primary to sixth form. Although Dr Ben Marsh (University of Kent) could not be there on Wednesday night, he has been in contact with Harold, and he and I had had a meeting at Kent last week to discuss the potential of this initiative for student engagement, especially in terms of the records held by some of the museums (and businesses) in Faversham that might become more available for study at the Heritage Hub.

At the meeting, Dr Pat Reid, of the Faversham Society’s Archaeological Research Group, similarly stressed the availability of artefacts found during various archaeological excavations in Faversham and surrounding area that could also be available for greater analysis. Moreover, keeping with archaeology, the wealth of the town’s built environment is clear if you look along Abbey Street and adjacent roads, as well as going slightly further afield to the Maison Dieu at Ospringe and the various sites associated with the town’s gunpowder works, which include the site at Oare. From our perspective at the Centre, building links with Pat Reid and her team has been very valuable, especially for our temporary exhibition, and all being well this will include some of the archaeological finds Pat looks after.

The other initiative that Diane and I are seeking to develop is Diane’s medieval animals project, based on her doctoral work on the bestiary, as an educational tool for schoolchildren. The first stage will involve the Centre in Lyndsay Ridley’s (The Canterbury Tales) ‘Canterbury Medieval Educational Day’ on Thursday 20 September and what Diane is proposing is a workshop – “Tiles were made here in Canterbury from Roman times to Tudor times. Some were plain, but others had designs which featured patterns, leaves or flowers. The more exciting ones had animals:  dragons, lions and eagles. Come and see images of the medieval designs then sketch your own version, etch it into polystyrene and print it onto card to take home.” 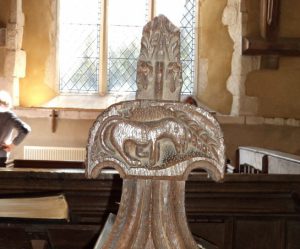 However, we are also teaming up with Penny Bernard and Alison Youd (School of Teacher Education) to see if we can develop an educational pack for Key Stage 2 called ‘Animal Magic’ that can be tried out by trainee primary school teachers and their schools next academic year. So, having had a brainstorming meeting last Tuesday morning, Diane has formulated a series of themes from the various animals and the descriptions of them and their attributes that can be fed into literacy, history, science and art/design technology. Penny, who also has experience as a teacher is going to take Diane’s ideas and look into potential funding streams, as well as how these ideas might be translated into lessons plans – much as she did for the Stone Age archaeological educational package that she worked on with Dr Emilie Sibbesson: https://www.canterbury.ac.uk/arts-and-humanities/school-of-humanities/archaeology/stone-age-for-ks2.aspx

All of this is very exciting, and I’ll keep you posted regarding developments and this project moves forward; while next week I will be able to bring you a report on the joint lecture by Dr Lesley Hardy and Dr Ellie Williams on their HLF-funded ‘Finding Eanswythe’ project. Their lecture is part of the joint Centre and Friends of Canterbury Archaeological Trust [FCAT] programme and is due to take place on Thursday 10 May at 7pm in CCCU, Newton Ng07 – all welcome!

School of Humanities @cccu_humanities @litencyc: We are delighted to announce that in 2022 The LE is resuming its Research Travel Award Programme suspended in 2021 on account of Covid19-related restrictions. Find out more here: https://t.co/etM4B8gwmZ

h J R
School of Humanities @cccu_humanities @Wordsworthians: #OTD 1801 Publication of a second enlarged edition of the Lyrical Ballads with a new preface. Coleridge's role is downplayed and a note added saying the Ancient Mariner has "great defects" Here's Jonathan Kerr's blog on this 'new species of poetry' https://t.co/G77HjiRpfr https://t.co/k2485CnNLT 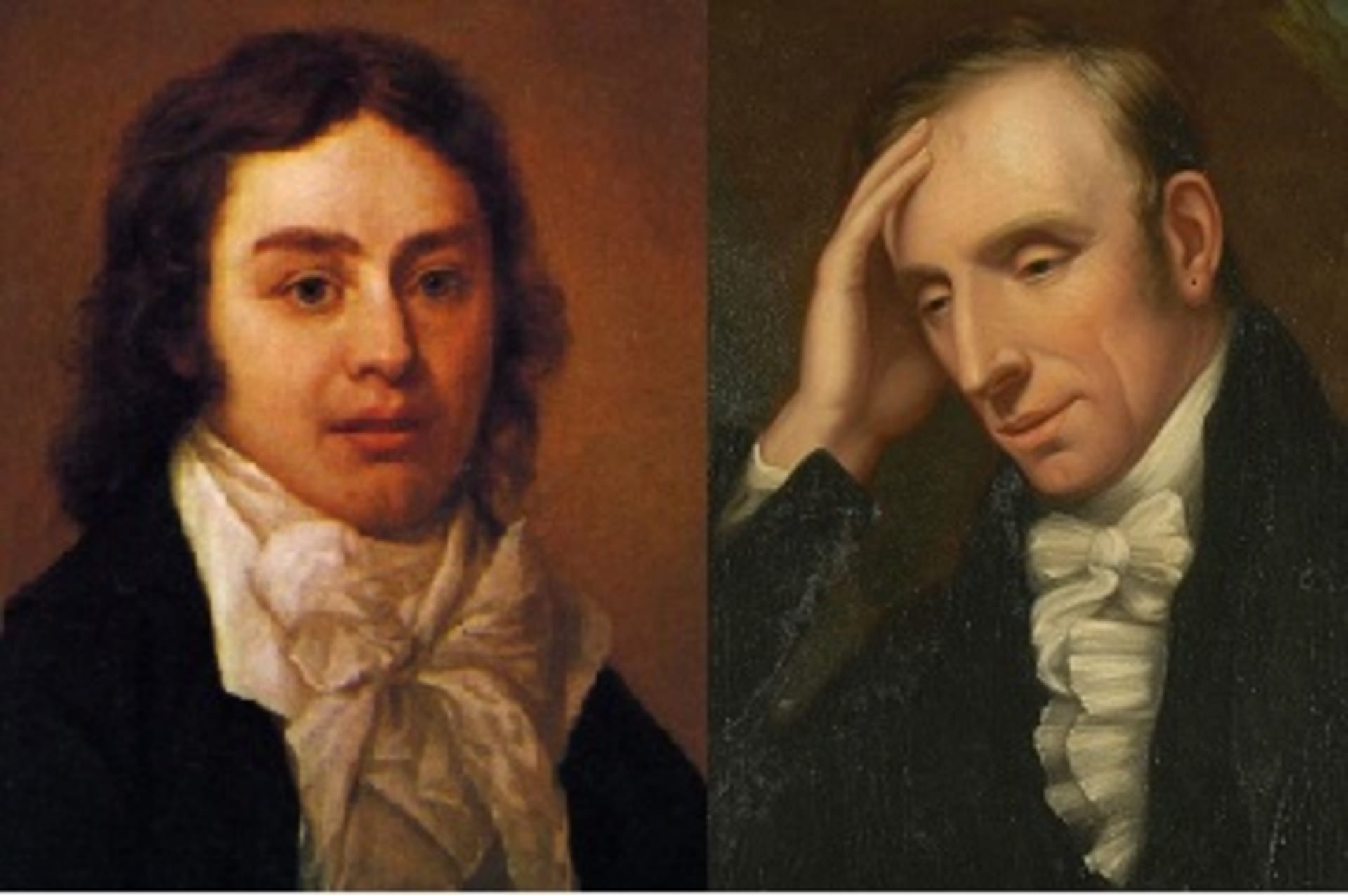