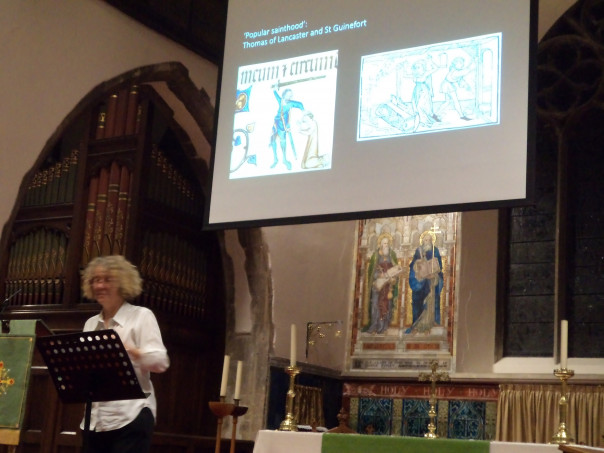 This week has been very busy, for as well as Diane’s hunt at the Freshers’ Fair for student volunteers to get involved in her NHLF-funded ‘Medieval Animals Heritage’ project – she has been moderately successful but is looking for more people, if you are a CCCU student and think you might be interested, please email: diane.heath@canterbury.ac.uk we have been working our way round the Canterbury churches for ‘Kentish Saints and Martyrs’.

However, before I report in a little more detail, I thought I would highlight what is coming up next week because it is absolutely fantastic that Professor Catherine Richardson will be giving the Nightingale Memorial Lecture on Tuesday 28 September at 6.45pm in the CCCU St Gregory’s Centre. Catherine is a highly respected and well-known early modern scholar whose work on the households of the ‘middling sort’ has earned her considerable renown. For this joint lecture with the Agricultural Museum at Brook, she will be focusing on her collaborative research with the world-famous Weald and Downland Museum – not to be missed! Due to social distancing measures numbers are limited to attend in person, but you can still book a free place at: https://www.canterbury.ac.uk/arts-and-culture/event-details.aspx?instance=353806 Please note that we are intending to livestream this free, public event and we are very grateful that Toby Charlton-Taylor (AV) has shown us how to do it, so fingers crossed it all works next Tuesday evening! Please note this is the joining url: https://teams.microsoft.com/l/meetup-join/19%3ameeting_NzU2NzQ4N2QtMGU2MS00ODgyLWEyYzAtN2QwMTdiZGVmYmY0%40thread.v2/0?context=%7b%22Tid%22%3a%220320b2da-22dd-4dab-8c21-6e644ba14f13%22%2c%22Oid%22%3a%225438ffb7-ff66-44f6-9ccf-cf504309571b%22%2c%22IsBroadcastMeeting%22%3atrue%7d&btype=a&role=a

The livestreaming does not require booking and is free, just join as you would for a Teams Live Event, and if you don’t have Teams on your device, join anonymously on the web.

From next week, I’ll start publicising Dr Claire Bartram’s CKHH Canterbury Festival online events with the various joining links, so please do watch out for this! Similarly, the ‘Maritime Kent’ free, public conference with KAS on Saturday 6 November is now open for booking – please watch out for this, we have some great speakers.

So what about this week? In addition to Dr Diane Heath’s request for volunteers, we have been on a ‘medieval church crawl’ around the city. Starting last Saturday at St Paul’s church – they have fantastic facilities there for talks and other events – a good-sized audience heard Dr Sarah James (Imperial College, London) discuss the idea of what made a saint from a medieval perspective and how the salient characteristics changed from the earliest centuries through to the later Middle Ages. She ranged over Christendom for her examples, but there were some from Kent, such as the St Thomas of Canterbury miracle about the finding of a lost cheese. Moreover, the saintly Guinefort, a rather special greyhound, has been a favourite of mine since I taught a course for UKC at Dover about twenty years ago. Sarah’s exposition on medieval ideas about sanctity and the increasing role of regulation by the Church hierarchy with the added tension that this might bring concerning popular cults has been one of the aspects later speakers have explored further. Additionally, her assessment of how and why cults were encouraged offered useful ideas similarly taken up by others. Thus, we are very grateful to her for setting up the series so well.

Moving up the hill to St Martin’s, I was delighted to introduce Diane Heath who spoke on why certain early senior churchmen in pre-Conquest Kent were considered to be saints by their peers and contemporary society more broadly. Interestingly being an Archbishop of Canterbury gave you a pretty good chance of being seen as saintly, especially those associated with Augustine’s missionary expedition to bring Roman Christianity to Britain. For while the sanctity of the monastic calling might be one avenue, the value of pastoral care was viewed as especially worthy of merit. Among the other topics Diane explored was the importance of emotions and how people were expected to express these both as devotees of a specific saints but also how the saint engaged with such ideas to strengthen the beliefs of their various communities. The importance of emotional engagement was picked up during the questions after her lecture, and Diane finished with a short summery of her new project and how emotions are central to what she will be doing using medieval animals to work with disadvantaged children and their families in coastal Kentish communities.

On Tuesday we were back in St Paul’s church where Dr Ralph Norman provided an exposition on one of St Anselm’s core texts, Proslogion which he composed while a monk at Bec. As Ralph pointed out, he was approaching his subject from a very different perspective compared to the other speakers in the series, because St Anselm’s works continue to be studied by students today, the questions he poses being what might be said to be outside the bounds of time. Having taken his audience through the first three sections of this work to explain what and how Anselm was seeking to set out regarding proving God’s existence through eternal reality and truth – think mathematics, Ralph moved on to examine how later theologians and philosophers have engaged with Anselm. For his ideas were and remain contentious, hence their appearance on the ‘A’ level syllabus, and thus students can engage with responses by amongst others Luther, Descartes, Spinoza, Leibniz, Kant, Hagel and Bertrand Russell. As Dr Claire Bartram who was chairing the lecture said, Ralph had provided a wealth of fascinating arguments that were mind-stretching, an idea that was picked up by several of those posing questions to him.

Before I leave St Paul’s and St Martin’s I just want to thank Michael Keeler-Walker, one of the churchwardens at St Paul’s for being so welcoming – thanks Michael, Sam and the Revd Mark, and we then moved last night (Wednesday) to St Mildred’s. That morning it should have been Jane’s presentation to the Kent History Postgraduates group but because she had caught a nasty virus and nobody else had a presentation to hand, I gave the long-suffering group an abridged preview on Kentish early medieval female saints. So I want to say thanks everybody for bearing with me, it was very useful from my perspective because it meant I could iron out a few points yesterday afternoon before the evening.

This is not really my area but quite legitimately my two preferred speakers had had to drop out and thus it seemed far easier just to do it myself. Thanks, Diane for your generous introduction and to the Revd Jo and those at St Mildred’s for your very warm welcome. I had decided to concentrate on what I think are the big four female saints for this period in Kent: SS Eanswythe, Sexburga, Mildred and Eadburga because they offer a great way to discuss ideas about cults, locality and identity. In a nutshell, even though it is somewhat problematic to rely too much on will evidence regarding the vitality or otherwise of specific saints’ cults by the later Middle Ages, I would suggest that taking these four early medieval saints as case studies, in broad terms it would seem that the relationship between saint and locality was crucial for the vitality of these cults over the centuries. Indeed, to have managed to keep such veneration going of St Sexburga and St Eanswythe, in particular, from truly ancient times was a massive feat that highlights the role of social memory probably far more than written texts. For even though for both St Augustine’s Abbey and St Gregory’s Priory their appropriation of St Mildred may have been somewhat successful for their own brethren, the displacement of her relics from their ‘home’ community had seemingly largely broken the link between saint and locality in the minds of the late medieval laity.

Rather than try to squeeze in tonight’s lecture at St Dunstan’s given by Dr Doreen Rosman and wait for those at St Peter’s tomorrow or St Thomas’s RC on Saturday, I shall report on Doreen’s and the remainder of the series with the Nightingale Lecture in next week’s blog.