This week has been busy, what with trying to finish off editing ‘Early Medieval Kent’ and attending the Fifteenth Century conference that this year took place at the University of Kent, which means I’m intending to write a short blog this week. Concerning the conference, although primarily organised by Kent people, there was some input from those from Canterbury Christ Church, and Dr David Grummitt, the head of the School of Humanities here was one of the co-organisers. There were a number of interesting papers, although the use of parallel sessions – inevitable but still a pity – meant that I missed a couple of speakers I would like to have heard. It was a varied programme ranging from peasant dairying (Jordan Claridge) to the wayward activities of apprentices in the guilds of Ghent (Laura Crombie), but as is often the case there was a fairly heavy emphasis on royalty and politics, as well as war which is not surprising considering the century witnessed conflict abroad and at home in England. The two plenary lectures were examples from these two strands of high politics and economics, the former from Paul Cavill of Cambridge on sermons at Paul’s Cross in London where preachers, as far as we know, focused on topical, political concerns; and Philip Slavin of Kent who looked at the agrarian crisis of the late 1430s, which very interestingly did not include cattle plague, as it had in the early fourteenth century. 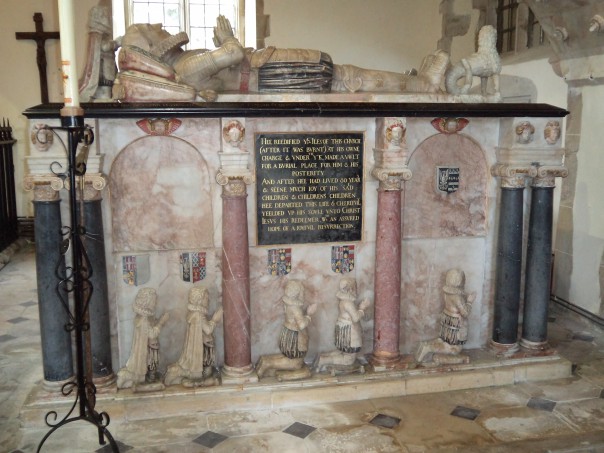 A fascinating gentry tomb – well worth a visit

For me the highlight of the conference was hearing Jonathan Hughes exposition of the cultural outlook of Duke Humphrey of Gloucester, one of Henry V’s younger brothers and a man of commanding intellect. It is Duke Humphrey’s library that is at the core of the Bodleian collection at Oxford and his wide-ranging scholastic interests ranged far wider than his contemporaries. Alchemy was one of his interests, as well as associated medical texts. Such ideas informed much of his reading and thinking regarding classical texts, which included Greek philosophers as well as the more usual Roman writers. Jonathan’s particular focus was on Plato’s ‘Republic’ and how Plato’s ideas on rulers and governance, and the structure of society seems to have informed the duke’s perception. For as he pointed out, the evidence strongly suggests that he was extremely familiar with this text. This was very interesting, and so were his observations of the translation that Duke Humphrey commissioned that has come down to us as the Middle English ‘Book of Husbandry’. This treatise on the management of a gentleman’s estate month by month over twelve months and how is explores the relationship between man and the land, again using ideas associated with humour theory – the ‘wet, cold’ land of England (probably in actuality but also from the perspective of the humours) that needed to be dried through care to achieve balance – was fascinating for an ex-agriculturalist.

So that was the week just gone and turning to things to come, several from the Centre will be meeting on Monday to discuss Martin Watts’ idea about a possible study day or something similar on the fascinating history of Richborough, probably from its great Roman fort to its extraordinary use as a port during the Great War – Martin’s particular interest. So there is that to come and it is also worth mentioning here that the Medieval Canterbury Weekend in April 2016 will coincide with Canterbury Archaeological Trust’s celebration of its forty-year history – remembering what has happened and looking forward to what is to come. Amongst other events this will involve a grand exhibition of Trust finds, discoveries and interpretations from the work of past and present members, which will be held at the Beaney before it goes ‘on tour’ around Canterbury and its environs. And there will be more on all of these projects in the coming week, so watch this space!

School of Humanities @cccu_humanities RT @gavandtonic: #BLMFiction /31: Walter Mosley, Down the River Unto the Sea (2018). A suspenseful crime novel about police corruption, and…

h J R
School of Humanities @cccu_humanities RT @BookcultureCCCU: Retweeting the biscuit challenge We will keep this open until the end of the month so do send us yr designs https://t.…