Even though Canterbury Cathedral’s status as a royal mausoleum is not great, it does commemorate an extremely interesting queen, as Dr Eleanor Woodacre (University of Winchester) reminded her audience at the History staff/student seminar earlier this week. Joan of Navarre, Henry IV’s Queen Consort seems to have been a very feisty individual, which was probably a good job because she had to deal with a range of challenging circumstances first as Duchess of Brittany, then as Queen of England and finally during a long widowhood. Among these challenges was an accusation of witchcraft in 1419 when it was said that she had plotted to bring about Henry V’s death. However, Dr Woodacre believes that this should be seen as a royal strategy to enrich the Crown’s coffers at a time when the king was in need of funds for military campaigning in France – as a consequence of the accusation her dower lands had been seized by the king. This focus on her dower lands – she had such holdings in the right of her Breton and Lancastrian marriages – was at the heart of Eleanor’s paper. 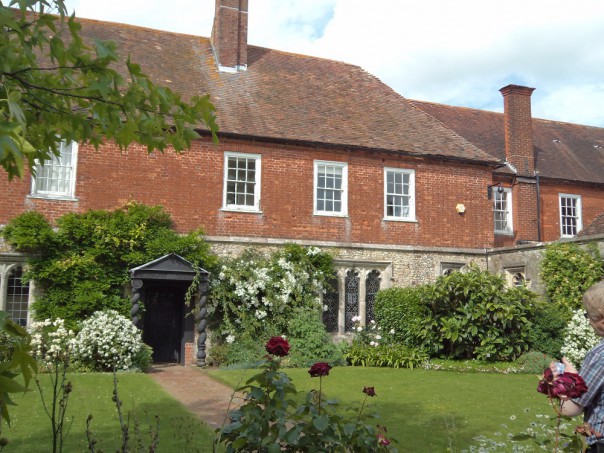 Dr Woodacre is in the early stages of a project to examine the role of royal women as independent agents through their role as landholders and how they did or didn’t exercise lordship, as well as their various relationships with their children, other members of the court, the wider aristocracy and towns in which they held rights and privileges. Joan of Navarre is a particularly rich case study, not least because she held such lordship in lands on both sides of the English Channel. Teasing out the rights she was expected to enjoy, and where and when she had to struggle to secure and hold them has been a major part of this project so far, especially because the political situation in both Brittany and England was extremely challenging in the last decade of the 14th century and the early decades of the next. One thing that particularly interested me was her relationships with the civic authorities of Bristol, Winchester, London and Southampton, all places where she had certain rights of lordship and many of these had also traditionally been held by queens. It was her role in Southampton that especially struck me as worth exploring because the port was at this time growing in use and importance as a place of embarkation for Henry V’s military forces. Where this will lead I don’t know but it will be fascinating to hear at a later date what Eleanor has discovered.

Keeping with the idea of discovery, as well as those commemorated in Canterbury Cathedral, I thought I would mention that I’m getting interested in Cardinal Kempe’s collegiate foundation at Wye. Some studies on this late medieval foundation have been published by both antiquarian and modern historians but I think there is potential to extend this to place it as a case study within the wider history of late medieval collegiate establishments. To a degree I am taking my cue from ecclesiastical historians such as Clive Burgess who, within the last decade, have commented on the way such institutions still remain ‘poor relations’ within the medieval Church compared to the level of study devoted to monasteries, friaries and even hospitals. This suggests further work on Wye would be a good idea, and is timely because Canterbury Archaeological Trust has just completed an architectural survey of the College. Rupert Austin’s assessment of the standing buildings is important for a number of reasons, but in the first instance I will leave that aside and merely mention two reasons why particular aspects of this establishment may be viewed as valuable within a wider context of such medieval colleges.

Some ecclesiastical historians have seen colleges as having played a key role in the development and vitality of the late medieval Church in England from the time of the first outbreak of plague in 1348-9. In part this relates to the multifunctional nature of these secular religious communities that, as at Wye, combined increasingly complex liturgies, including the deployment of polyphonic choral practices, with educational provision that was intended to provide both choristers and an educated clergy, after further study (at Oxford or Cambridge). Moreover at many colleges, again as at Wye, this involved the integration of the parish church into the devotional life of the religious house so that the parishioners became part of this spiritual community – the parishioners’ prayers were added to the accumulation of masses for the spiritual benefit of the patron(s). Even though Kempe was not in the same mould as Archbishop Arundel whose efforts to stamp out heresy (Lollardy) in the early 15th century had pushed the movement underground, as a county Kent remained vulnerable to such ideas in the eyes of the Church. Thus for an Oxford-educated cleric such as Kempe his new college in his natal parish of Wye could form a bastion against hetereodoxy and even worse heresy, both through the daily services celebrated in the church next to the college and by the ministry of those educated at Wye who became part of an expanding orthodox priesthood.

Secondly, Wye College is important because of its location. Although to a degree that is a geographical accident, Kempe’s family home was the small manor of Olantigh in the parish of Wye, the great manor of Wye was exceedingly important having been established and given by William I to his foundation of Battle Abbey, a memorial to his success at the battle of Hastings. The vast manor of Wye not only included much of its large home parish, but also included large tracts of land on the Romney Marshes, especially in and around Lydd, the town and neighbouring New Romney under the lordship of the archbishop. Thus as elsewhere in the county lordship was a complex web of often scattered and even overlapping jurisdictions, and Wye was an extremely valuable part of the very extensive ecclesiastical landholdings across Kent. However it was not within the archiepiscopal estates but through the ancient patronage of the Crown could be construed as being within the orbit of the king in addition to Battle Abbey. As a frontline county, the early kings of Kent and their national successors apparently believed the most successful strategy regarding landholding was a partnership between Crown and Church, and, even though this did not always function smoothly, it continued to be seen as the best option in terms of foreign invasion and what has been termed the problem of ‘over-mighty’ subjects. Kempe’s new foundation necessitated negotiation and agreement among Battle Abbey, Henry VI and himself in order to acquire the real estate, church patronage and endowment for his college, and territorially and spiritually he may be viewed as driving an archiepiscopal (initially of York) wedge into the abbey/royal heartland of Wye.

Taking these points together, Cardinal Kempe’s college at Wye can be seen as fitting closely into the religious environment of later medieval England in terms of liturgical developments, the continuing desire to create an educated clergy, both to combat heresy and to strengthen ideas about an English identity, especially for the Lancastrian kings, and, even though not considered here, the reinvigoration of the cult of Our Lady. All of this is in line with the view of historians that Kempe was a loyal servant of Henry V and even more of his young son, Henry VI both politically and religiously. Nevertheless, and it is perfectly natural that he wished to establish Wye College in his natal parish close to his family’s patrimony, his choice of location would seem to suggest a churchman of considerable ambitions who sought to put down a strong marker regarding his (and his family’s) place in this world and for eternity, which means Wye College and its foundation and development is a telling example of an important late medieval political, religious and social phenomenon. And here I will leave it, perhaps turning to medieval hospitals and almshouses next week because Kent and Canterbury have a rich heritage of these charitable institutions too.