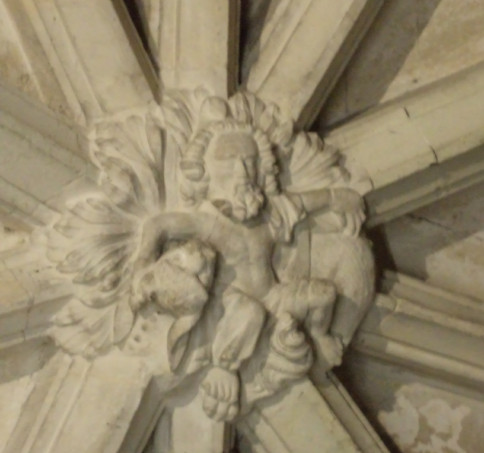 Currently CCCU is open, however, we have been informed that the higher powers will be making a decision about the fate of university events, including the Medieval Canterbury Weekend 2020 and other CKHH events, early next week. Moreover, with the UK government’s statement today, things are moving swiftly. Consequently, I’ll keep you informed as and when I have some concrete news.

Turning to this week’s report, I thought I would move to the early modern period and firstly report on a talk I went to on Wednesday to members of the Canterbury Historical and Archaeological Society [CHAS] by Dr David Shaw, a bibliophile and retired lecturer from the University of Kent. David has been heavily involved in cataloguing and other activities at Canterbury Cathedral Library & Archives for many years, and this cathedral connection was in some ways the source of his lecture.

Even though he is especially interested in the cathedral’s books, he has more recently turned his attention to the Dean & Chapter’s treasurers’ accounts. Concentrating on the period 1660 to 1700, he has been exploring matters of expenditure that relate to the newly restored library following Charles II’s return from exile, but as he has worked through these accounts, he has been noting other interesting expenditure entries for his blog. As David explained, the Chapter’s finances were the responsibility of two of the canons: the Canon Receiver, who took in receipts, and the Canon Treasurer, whose records cover the expenses, and these posts rotated among the cathedral canons annually, the accounting year running from St Katherine’s Day to St Katherine’s Day.

For this lecture, David had decided for completeness that he needed to mention the cathedral’s revenues, and he showed that in the 1660s the Canon Receiver spent much of his time seeking to recover arrears from the Chapter’s various manors and other property, including, I spotted the Appledore fair. Furthermore, when such money did come in it was stored in the Treasurer’s Chest, which today resides in the Vesturer’s Office in the Wax Chamber, and for security it is a chest with three locks, a common system since the Middle Ages.

From this chest the Canon Treasurer for that year would pay out the required monies, the first item in his accounts being the stipends to the dean and canons that were distributed at the four quarter days. The dean received considerably more as befitted his status and position, which was reflected in his accommodation, the exceedingly grand and substantial deanery. Next in the books are the payments to the choirmaster and ten choir boys , to be followed by the payments made to the schoolmaster, his deputy and the fifty King’s scholars, who can still be seen in the precincts from their distinctive purple gowns. As David showed, all these men and boys are named in the records year in year out, which means it would be feasible to conduct a study of the individuals and families involved because certain Canterbury families were heavily involved in the cathedral community for several generations.

Also listed in this way were the twelve beadsmen, who in return for their payment were expected to attend services in the cathedral, the term bedesman coming from the medieval idea of the bede or prayer, which in times past they would have prayed for the souls of their benefactors. Thereafter the accounts record the cathedral’s six bell ringers, the organist and organ blower, whose duties included killing rats that got into the organ pipes, the keeper of the clock, the wood reeve, the seneschal of the high court, the green keeper and the water keeper.

At times, too, these records mention various workmen and the maintenance jobs that were needed for the cathedral, as well as one off expenses, such as the proclamation in 1689 regarding William III. Among the items relating to books, David showed his enthralled audience the entry for the alteration of the prayer book. He also showed a range of entries relating to the cathedral community’s charitable activities, the pages and pages of alms-giving that went on year after year. Some of the recipients are named, such as Browning the chorister who received money when he went to sea, but others are like the fifty poor women who received monthly 6d each. Nevertheless, like the choristers and schoolboys, as David said, it would be feasible to conduct a detailed study of these almsfolk.

Having his worked his way through the records, David was happy to take questions, and this led to several lively debates before the meeting drew to a close and his appreciative audience gave him a second round of applause.

Keeping with early modern Canterbury, I recently stumbled on a report I wrote for Canterbury Archaeological Trust on the documentary sources for part of St Radigund’s Street area (originally known as Waterlock Lane) which those who know Canterbury will appreciate incorporates the line of the city wall. The wall was demolished in the late 18th century, but the wall’s foundations have been recorded along the frontage of ‘The Dolphin’ public house and under the street. Just a quick aside, St Radigund’s relates to the medieval abbey of that name near Dover which had acquired various properties in the 13th century in the area between Northgate and the River Stour ie at and around Froxpole outside Northgate (Froxpole is the early name for Duck Lane). These were a mix of land, gardens and tenements, which the abbey then rented out to local tenants. However, later documentary evidence from the 15th century indicates that at least part of the abbey’s holdings comprised a ‘hospice’, which the abbot presumably used when he was visiting Canterbury, as would his guests. Such a place was probably on a much smaller scale than those in Southwark, for example, that many religious houses held and were used by senior churchmen when visiting London and the court on ecclesiastical and other business.

Keeping with St Radigund’s, the abbey was dissolved in 1536, and like the monastery site, the Canterbury lands passed to the Crown. The fate of these abbey lands is reasonably difficult to follow, but some at least were held by Canterbury’s civic authorities by the late 16th century, and they had also acquired the holdings of St Augustine’s Abbey which abutted much of the St Radigund’s Northgate property, although a small portion was apparently freehold until the city purchased ‘St Radigund’s Bath’ in 1793.

So what was St Radigund’s Bath’? Here I’m going to skip to the early 18th century and when I was working on this report, I was able to benefit from Miss Jeffrey’s knowledge of the area’s history. For the story of the bath, this begins with the buildings to the rear of Duck Lane, which comprised a house and tannery belonging to the Waite family until 1724, when following the death of Peter Waite, the property came into the hands of John Lade. An inventory of Waite’s goods indicates that his house was substantial, and it also appears on Alderman Simmons rough sketch map of St Radigund’s, dated 1793, where the house and stables are shown to the east of a tan yard, the yard occupying the space which was later used for the bath house/public house. The buildings were just to the north of the city ditch, which was about 80 feet in width, and on the northern boundary were very close to the common ditch/sewer that ran from the river end of Duck Lane to the river.

Having acquired the property, John Lade sought to let it either as a whole or in parts: house, tan yard with barns and stables, orchard, meadow ground, garden ground, but was unsuccessful. This was perhaps the spur needed to convert it into a bath house, the premises gaining status through its new name: ‘St Radegund’s Bath’. According to an advert in the Kentish Post (1740), the cold bath had been enlarged, measuring 22 feet by 12 feet and was between 2 and 5 feet deep. The bath was fed by a ‘fine Gravel spring’ at a rate of 20 hogsheads of water per hour, thereby maintaining the clarity of the water. Mixed bathing was not allowed, and attendants were on hand to maintain decorum, bathers paying a guinea a year or a shilling a time for the privilege. However, the bath house seems to have had limited appeal, leading the proprietor to try certain novelties, such as the introduction of asses’ milk in 1745.

For John Lade, his acquisition still wasn’t bringing in a sufficient return and he sought to let or sell the bath house 3 years later. That same year part of the premises had become a public house under the control of William Badcock, who had recently left the ‘Blue Anchor’ at St Dunstan’s and soon it was known for cock fighting, as well as drinking. Yet the ‘Cold Bath’ remained, the ‘better sort’ attending concerts there on several occasions in the 1750s and early 1760s. They were held in the large assembly or music room, possibly on an upper floor of the ‘Cold Bath’ public house, the property also comprising 4 rooms on the ground floor and a cellar for storing beer and wine, 2 stables, a coach house and a large yard.

Yet such diverse activities still weren’t sufficiently profitable for Alderman Lade and success seems to have eluded all the leaseholders, the city corporation able to purchase the bath house and associated lands in 1793 for £700 from the various owners and leaseholders (although one of the tenants refused to go forcing the corporation to take legal action). The two men behind the corporation’s purchase were Alderman James Simmons and Alderman Royle, who then acquired the lease of the bath house estate and two mills for 28 years at £37/year. To enhance ‘their’ property, they cut a second hole through the city wall to improve access to the bath house and created a second bath, the two baths being 18 feet by 16 feet and 18 feet by 6 and a half feet respectively. Both bath chambers were covered by arched roofs, which with the turrets provided sufficient light, and nearby were separate dressing rooms and a waiting room.

Yet, the enterprise was probably not much more successful and Simmons and Royle parted company in 1798, Simmons seeking to lease all the property from the corporation on more favourable terms. He was unsuccessful; and thereafter seems to have put all his efforts into the mills, spending little on the bath house. By the 1820s there had been a number of changes, the public house was renamed ‘The Dolphin’ and the baths became the best parlour and the bar parlour. As time went on more of the estate was used for housing, the memory of the bath house retained as 1 and 2 Cold Bath cottages, until they disappeared in the 1930s. Today ‘The Dolphin’ survives, but much of the rest of the St Radigund’s Bath House and Garden is covered in tarmac as a car park!