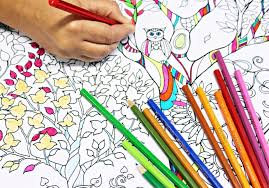 Those who advocate psychological therapies are good at being critical. Especially when it comes to medicine. But, argue  Huw Green and Leigh Emery psychology-types may need to be a bit more sceptical about what’s done in their name?

When is a colouring book more than a colouring book? When it’s a mindfulness colouring book apparently. Last year’s hit Christmas gift was briefly talk of the Internet. Colouring-in is the latest form of mindful practice. An activity with which we are all familiar can evidently be a sophisticated spiritual and therapeutic exercise. It might make you wonder though: is colouring especially ‘mindful’? It’s possible to do almost anything, from washing up to walking the dog, mindfully. So, while the covers of the colouring books aren’t straightforwardly deceiving, they might be accused of being misleading. There’s something irksome about simply repackaging activity with which we are all familiar as a sophisticated spiritual or therapeutic exercise, and of creating an illusion that their book is more health giving than any other.

Perhaps this is a bit trivial, as no-one actually owns the term ‘mindfulness’ and authors can do what they like with it. But is it really OK just to pick up terminology and use it unchallenged for your own purposes? Moreover, do those of us who have the title of ‘psychologist’ have a responsibility to highlight inappropriate, opportunistic or just plain lazy uses of psychological concepts?

The explosion of mindfulness is a success story in terms of a psychological therapy gaining a place in public awareness. This process has been seen before: an idea emerges, has promise and acquires support. Eventually (especially if it’s heralded as a new hope), it becomes a label and breaks into the mainstream of public thought. However, while these developments may be positive (they raise the profile of psychological therapies and may make them more accessible), a raised profile also attracts people trying to cash in on the public enthusiasm.

Cognitive-behavioural therapy (CBT) is a good example of this process. Emerging from the work of a psychoanalyst (one who had come to think that a more proactive approach to changing his patients’ minds might be productive) the notion of ‘cognitive therapy’ could be clearly delineated as a new approach to psychotherapy. This approach gained popularity over the years as it represented something apparently more scientific than psychoanalysis. CBT has expanded dramatically over the years as its popularity has grown, and it now seems ubiquitous. It has been rolled out across the UK as part of the government’s IAPT programme, and can now be accessed over the telephone or online. It has become the subject of countless newspaper articles and popular self-help books. It’s has even been suggested as a means to help improve your poker game.

Similarly mindfulness, as well as cropping up in colouring books, has a government stamp of approval and gets offered to boost productivity and profits in the workplace. But when an idea gets stretched over such a large area is it really the same thing any more? This is an important question to ask, and again there is an important parallel with CBT. When a meta analysis found evidence that CBT might be losing its efficacy over time, one explanation posited was that key elements of the therapy process were getting lost. While the studies examined were delivering all the ingredients the manuals said they should, they may have deployed fewer of the common factors (things like building a relationship or encouraging risk-taking) which are known to contribute to all psychotherapy successes. Could it be that CBT delivered solely in terms of ‘the model’ (without any broader understanding of how to build a psychotherapy relationship) is a less potent way of helping people?

Complex ideas may actually be very difficult to package up and for wide consumption and the results can be questionable. One group who know this well are neuroscientists. Many have developed a lively online culture of debunking extravagant claims made for such concepts as mirror neurons, ‘brain training’ and ‘neuro-linguistic programming’. Twitter accounts like @neurobollocks and bloggers like Neuroskeptic make it clear that it is almost a point of honour among brain researchers to distance themselves from the making of money by adding superficial ‘neuro’ prefixes.

It seems strange, then, that clinical psychologists (and others who ply their trade in the world of psychological therapies) don’t seem to have developed their own version of this guild-scepticism. If anything, we seem to lean in the other direction. It is common for clinicians to think of themselves in terms of a particular theoretical model (e.g. as a psychodynamic practitioner, or an CBT practitioner) with plenty of brand allegiance. This recent article by Oliver Burkeman provides an example of how CBT and psychodynamic therapy both have brand advocates, too willing to carp at each other over territory. This territorial grandstanding feeds into a desire to defend your own at any cost, making (for example) a mindfulness-based therapist feel positively disposed toward mindfulness-friendly products, even if they are pretty wishy washy.

Perhaps another of the reasons clinical psychologists are less vocal in debunking dubious products is that the whole profession stands to benefit when a psychological model such as CBT or mindfulness explodes into the public consciousness. Psychological therapies (in the UK at least) struggle to get the attention (and funding) of commissioners. So when a particular therapy hits the mainstream, this can easily be heralded as a boon. But this comes at a price. Policy makers have an interest in the dilution and cheap dissemination of psychological products. Standardised therapies with clear end-points can be rolled out inexpensively by people with minimal training. This may be good for politicians (and good for branded therapies, at least to begin with), but it could prove disastrous for people who receive an ineffective, pared-back intervention on the strength of a brand alone.

Psychology has yielded many fruitful ideas, but also spawned endless opportunists seeking to cash in on them. The temptation is to see the mainstreaming of psychological ideas as all good, and avoid pointing out the ways it dilutes and degrades them. There is far more to psychotherapies than the technical mastery of isolated sets of principles. Clinical psychologists (and all other mental health professionals, for that matter) should aspire to be effective and comprehensive providers of excellent quality mental health care by influencing service cultures and delivery, not just peddling models. If we felt less tribally aligned to isolated models like CBT or mindfulness we might be in a position to advocate for more comprehensive and empirically informed psychological care.

We need to look beyond our allegiance to specific therapeutic modalities, and overcome our aversion to vocally debunking watered down brands and assorted flim-flam. Can we be brave enough?

7 comments on “Where are the ‘psycho-sceptics’?”