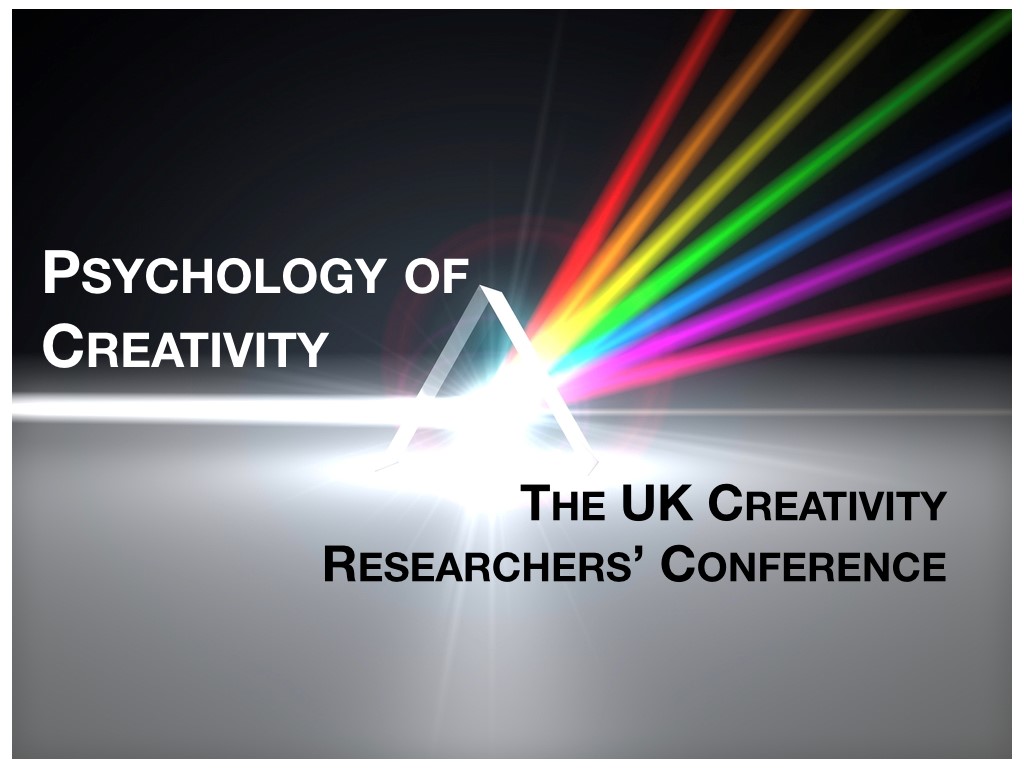 The moment came when I saw that one of our delegates was travelling all the way from Alicante. It was real. The email I’d sent in May of last year—telling the conference organisers that I’d be happy to help organise the next one—had transformed into real people coming to a real conference. Real food needed to be put onto tables. Wait, we’d need tables! And a laser pointer, and student helpers, and bits of ribbon to identify the student helpers. And finally delegates—one of whom would be coming from Alicante. Blimey.

In the end, our organising committee—Carolyn Mair, Karl Jeffries and Paul Sowden, ably assisted by our CCCU research assistant, Tammy Dempster—set up an excellent conference that built upon the brilliant first one last year created by Lindsey Carruthers, Shelly Kemp, and Gillian Hill. We also had great support from the London and Home Countries BPS Branch, who sponsored the poster prize and provided delegates with notepads and pens, and further support from the QR Environment Fund of our School of Psychology, Politics and Sociology.

Following a welcome from our Head of School, Jan Burns, the conference kicked off with a light-hearted but thought-provoking keynote from Todd Lubart on ‘Homo Creativus’, stressing our innate creative aspects. This built upon research gathered across a long career investigating various aspects of creativity. We followed this by one of the most dynamic and enjoyable parts of the day: speed networking! Overseen by Carolyn Mair, delegates introduced themselves to each other, then spoke for a few minutes before being partnered with new colleagues. There was a real buzz in the room while this happened; we chose to have it happen early on in the day to forge these connections as soon as possible, maximising the opportunities for later chats and information exchange. We also got some of our best photographs! 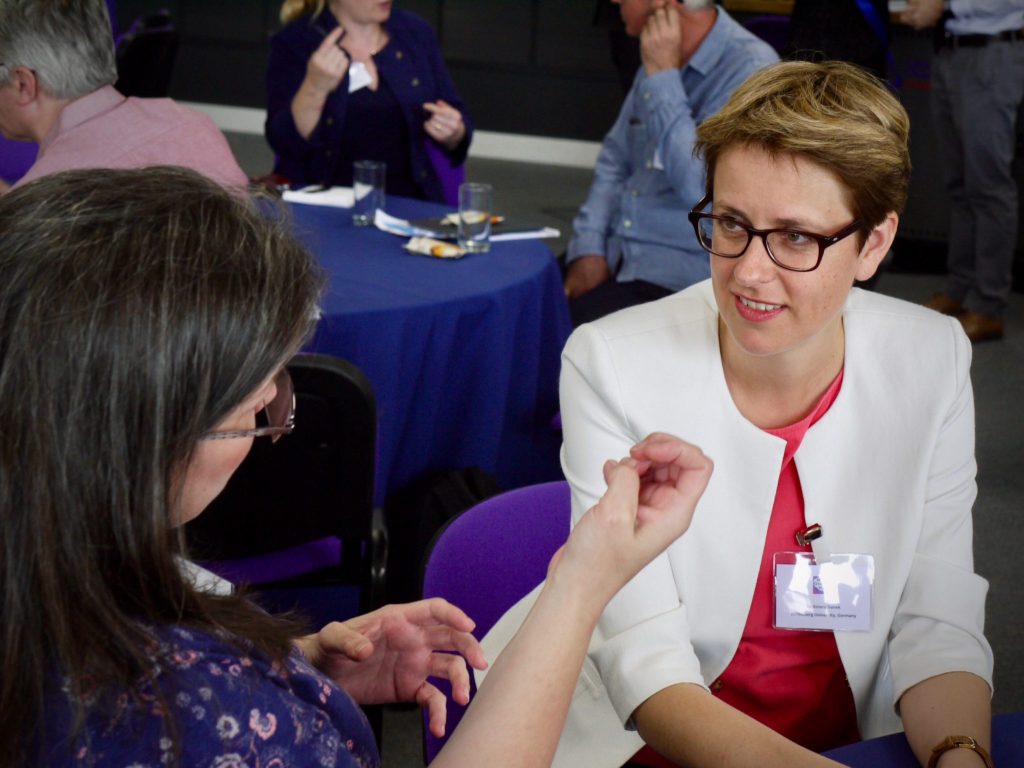 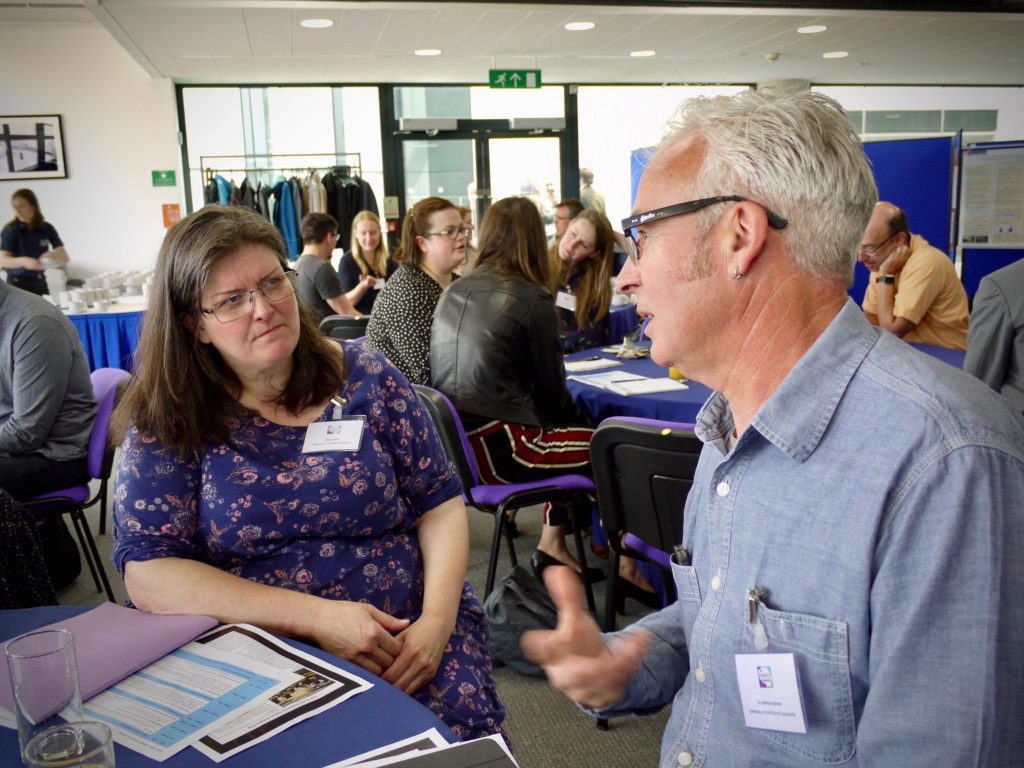 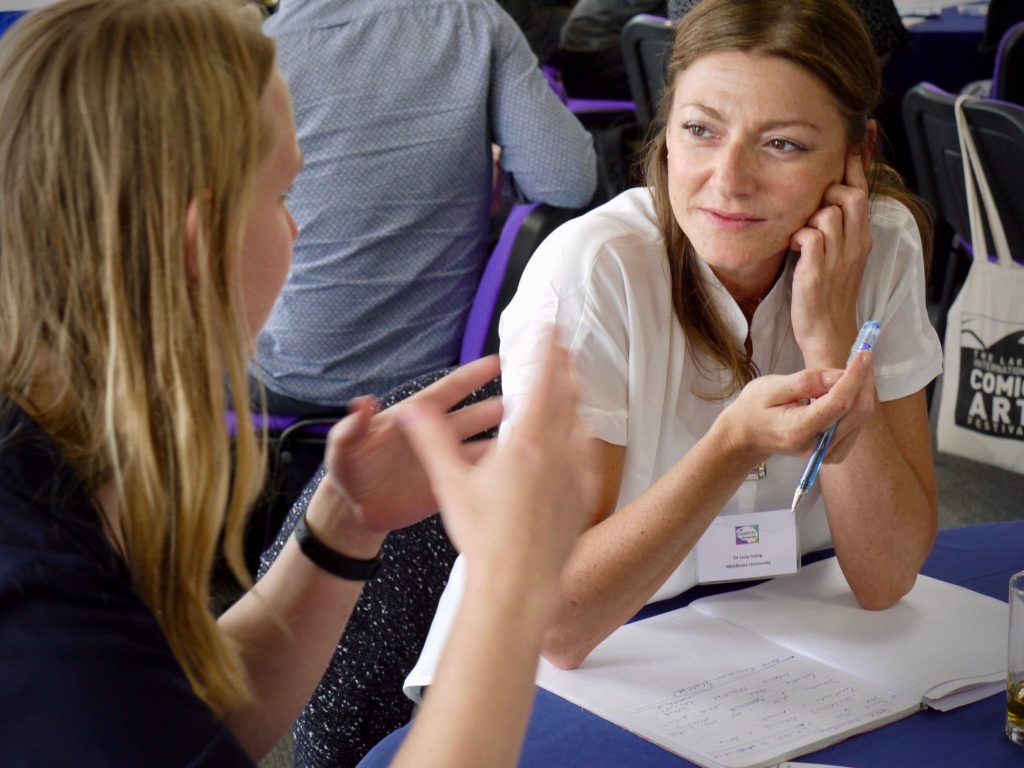 After a nice lunch that some delegates took on the terrace overlooking Canterbury, we got straight into some presentations. The original idea was to limit our two sessions to one hour, but we had so many good talks submitted that we bumped these up to an hour and a quarter. We were glad we did—the talks turned out to be one of the most diverse and interesting sets I’ve seen at a conference for a long time. Jonathan Plucker emphasised the marketing side of creativity, or ‘articulation’; for instance, part of what made Emily Dickinson canon was the effort of her supporters to place her there. Jeb Puryear reported on how our definition of creativity has changed across the years, without being altogether coherent. Enikő Bereczki reported on the relationship between teachers’ beliefs about creativity and their classroom practices, suggesting a puzzling disconnection. Emma Threadgold has been looking into the impact of stimuli like nature posters, which show positive effects on both group and individual divergent thinking. Lastly for this session, Mark Batey presented a new measure of capturing creative problem solving using a divergent thinking test. 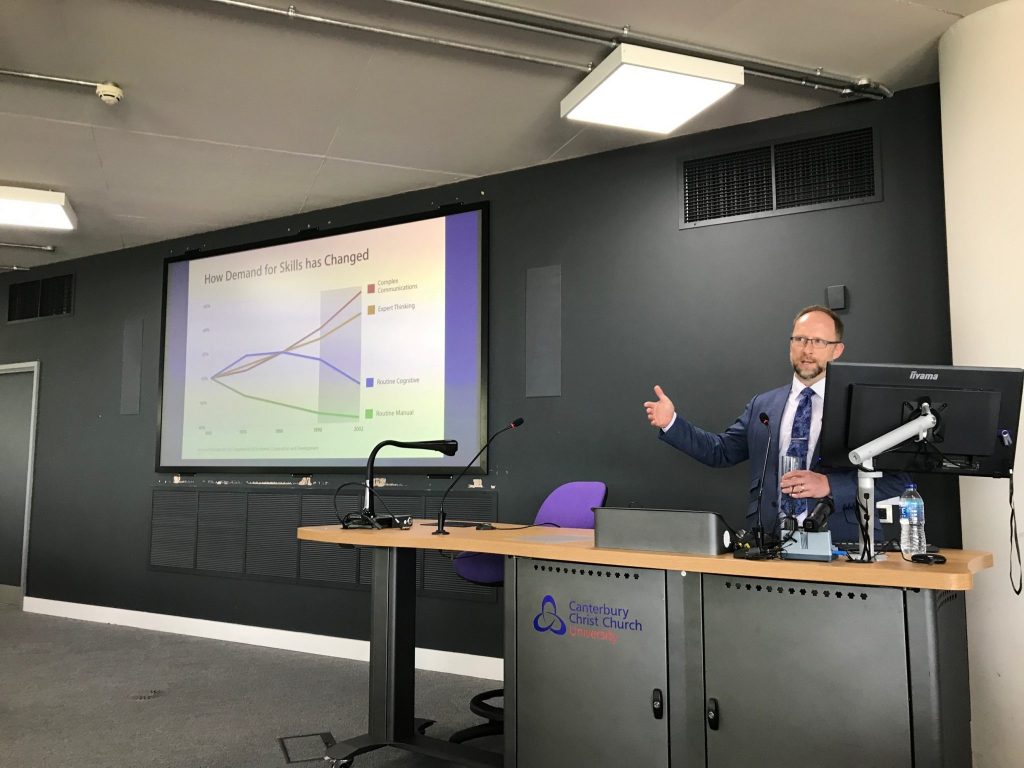 The poster session was next. Delegates were spoilt by almost thirty offerings, from toddlers and touchscreens to jewellery design. The winner of our poster prize was Anna Krauer for her research at the University of Surrey on leaky attention and creative achievement. Anna won a £50 Amazon voucher kindly donated by the London and Home Counties branch of the BPS.

The second and final session of talks kicked off with Amory Danek investigating whether the ‘aha!’ moment of insight truly represents a signal that a correct solution has been found—her evidence suggests that it does. Cathy Rogers then spoke about the role of executive function in children’s creativity; she presented evidence that executive function is flexible and nuanced throughout the creative process. Thomas Colin told us about a machine learning model of insight, based on simple world simulations of physical insight. Frank Loesche then introduced some ways of thinking about the linearity of the creative process; with parallelism, we gain explanatory power. Lastly, colleagues from University of Kent, led by Nicola Shaughnessy, presented intriguing videos from a multidisciplinary study of autism and creativity focusing on the intersection of drama and psychology.

We finished a great day with an interactive panel led by Karl Jeffries. Todd Lubart, Jonathan Plucker, Linden Ball and Janet McDonnell responded eruditely to tweeted, emailed and spoken questions about new directions for creativity research, as well as how the rest of the world (and the rest of psychology) sees us. 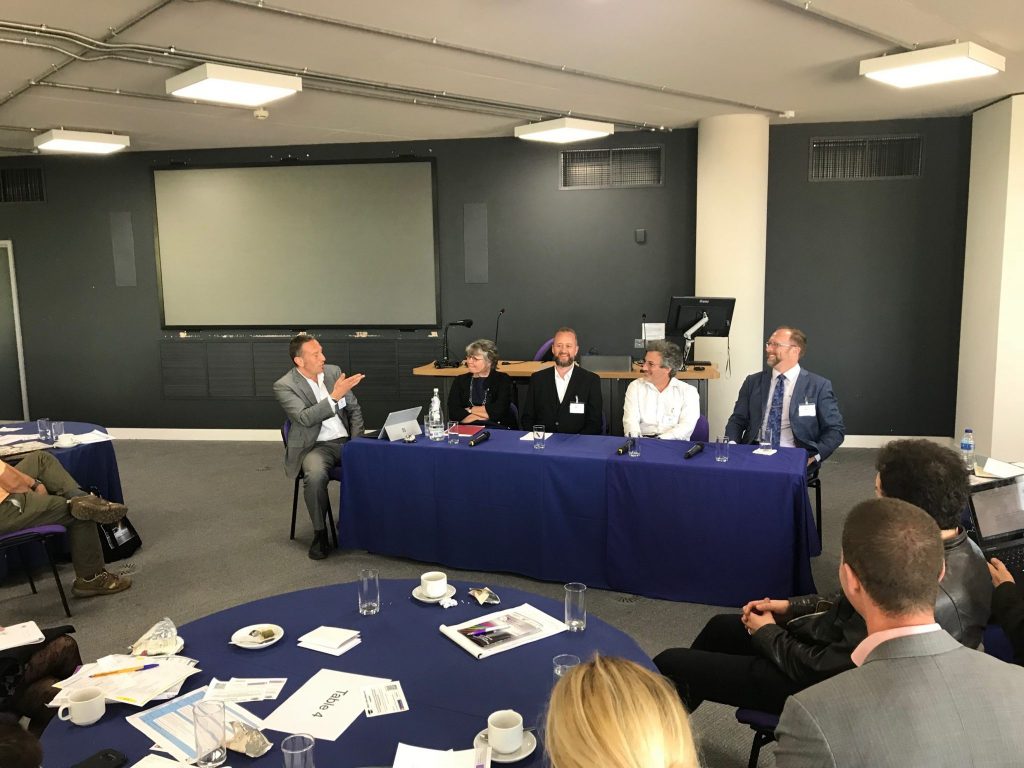 This being a conference, there was nothing for it but to continue the conversations in the pub, where the nuances of defining creativity—and possibly unrelated concepts—were set to rights.

The day wouldn’t have worked without the help of our team, as well as support from Jan Burns, the School’s Environment Fund, our hospitality team, CCCU colleagues Richard Weatherall, Britta Osthaus, David Vernon, and the resourceful Tammy Dempster, our student helpers Elli, Sara, Bryony and Tai, and also Mark Brogden. I only hope the team for the next conference at UCLan will be as awesome as ours—though I have no doubt they will be. 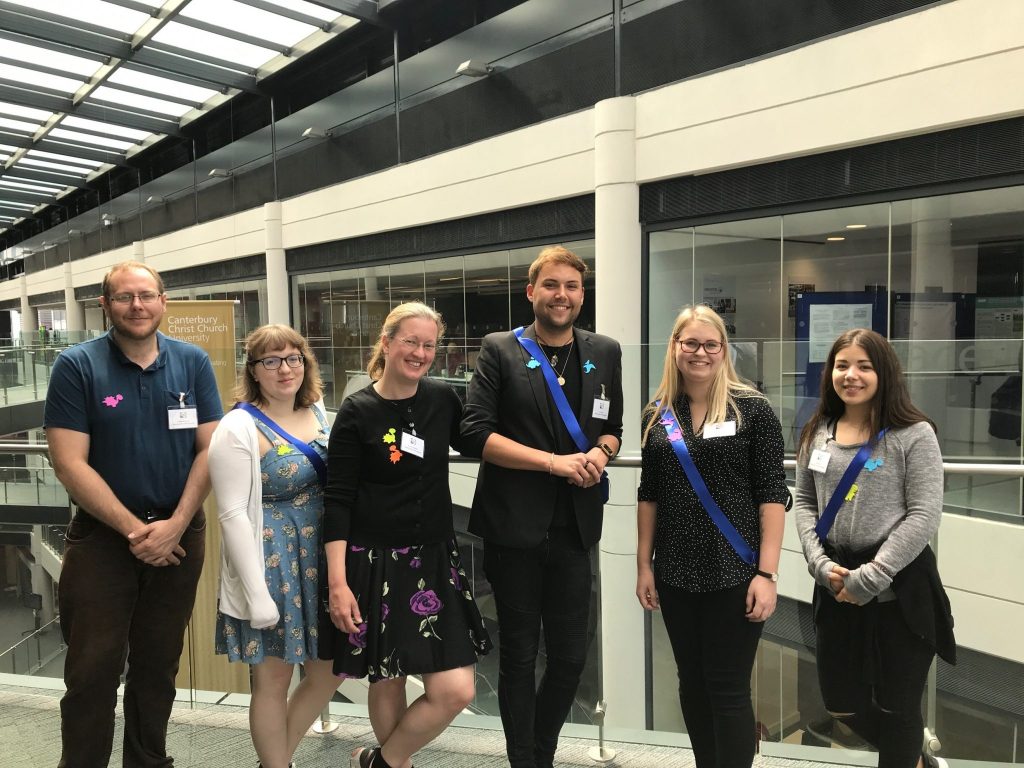 You can find lots more information—including our programme, talk slides, and book of abstracts on the UKCRC website.