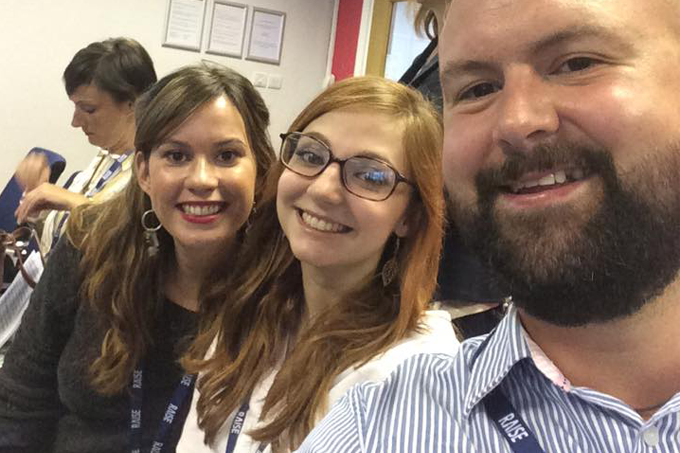 We arrived in Loughborough Wednesday afternoon, each settled into our rooms at the hotel and awaited the next day’s adventure…

Following this I attended 7sessions on the Thursday, which would take a while to explain in a short blog post! The best way to explain it all is to say that I learned A LOT about student engagement from other universities: co-created curriculum, the ethos of partnership, how to appeal to more students and the community aspect of student engagement activities.

What I really valued about the conference was that all of the presentations were accessible for everyone – it was all in language I could understand, rather than academic ramblings which sound like gibberish unless you have a doctorate yourself.

On the Friday it was our turn to present a 30 minute presentation on the partnership projects we had been working on for the last year. Phil briefly introduced us, but let the students, myself and Lucy, speak about the projects ourselves. Lucy, a recent graduate (a student when she began the project last year) spoke about Culturosity, a project which addresses ideas of diversity and inclusion. And I spoke about the Learning and Teaching project, where we translated University policy into something much more student-friendly. Our emphasis was on putting trust into students’ capabilities but having that support structure available if needed.

Our presentation went down very well, which was reassuring. We had lots of questions afterwards, and a fantastic response on twitter! It seemed that people really connected with what we said, the conference was full of people who are passionate about enabling the student to empower and develop themselves and engage in their university experience.

We went to 3 more sessions after our presentation; one of which particularly stood out to me which spoke about the future of student engagement policies and funding but in layman’s terms I could understand! How great it was to attend a conference about important, high level concepts and I understood!!!!!

Overall, I’d like to praise RAISE for hosting such an awesome conference. I want to also thank them for being such a student-friendly organisation, not once did I feel uncomfortable or out of place at the conference.  It’s all well and good stating that you are working towards enhancing student experience for the student, but unless you respect and allow the student to actively engage in the enhancement of other students it seems insincere and a little concerning to me. RAISE help to inspire this attitude of trust and partnership among people working in Student Engagement, which I think is amazing.