Volunteering in the University Archives: a Sensational Adventure! 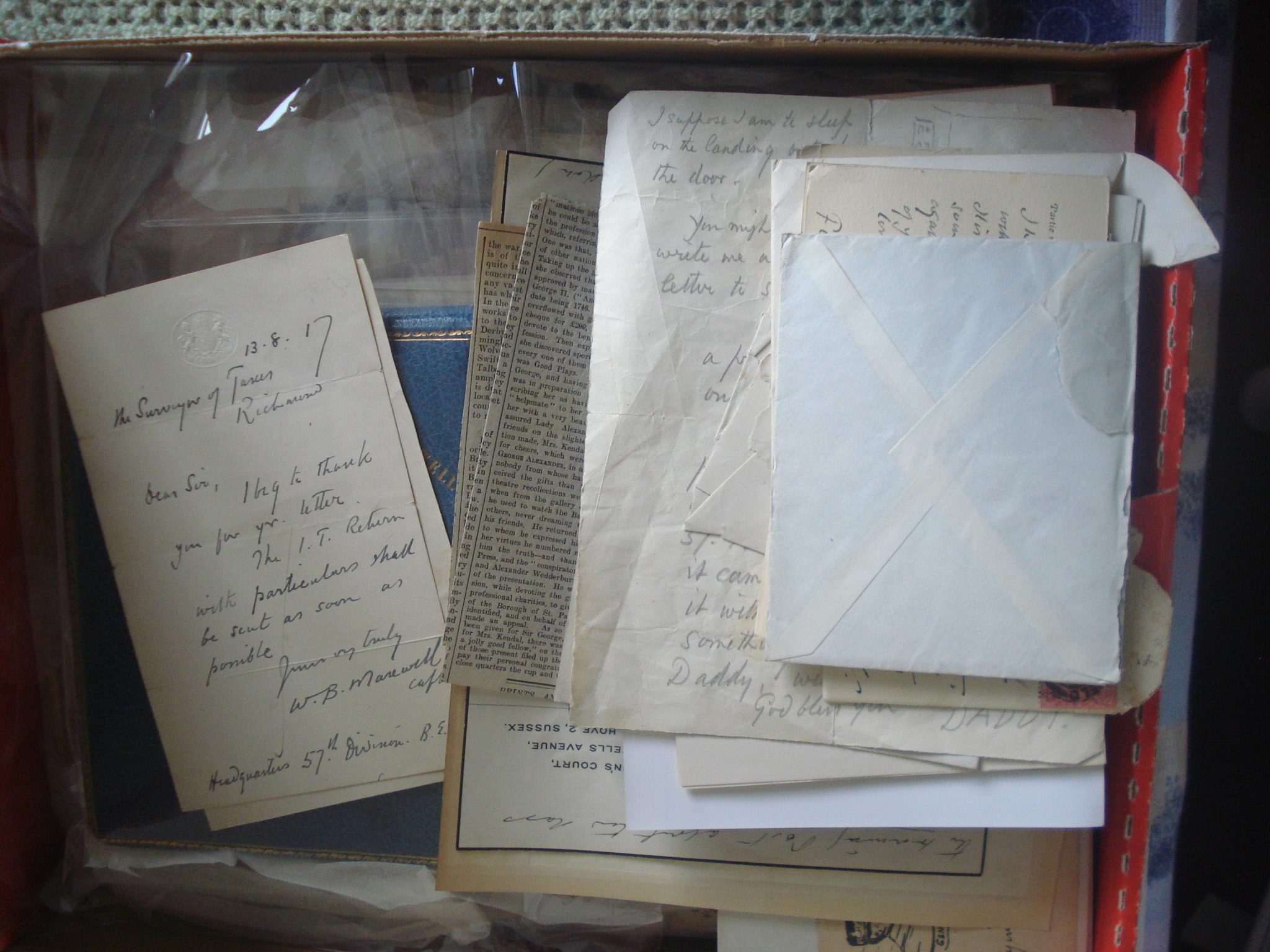 On my first day volunteering at Canterbury Christ Church University’s archive, more specifically working on the Braddon collection, I came across a letter dating from the 1960s from history professor Robert Lee Wolff to Henry Maxwell.

The letter concerned items in Maxwell’s possession, which were of interest to Wolff as they had belonged to Maxwell’s grandmother Mary Elizabeth Braddon, the Victorian Sensation Fiction writer.  In the letter Wolff expresses (humourous) dismay at Maxwell’s dismissal of these items as probably “useless” to anyone, and claims that Maxwell’s flippant attitude towards these precious items makes him appreciate the gulf between himself (Wolff) and “sane person”.

And so, during my first handling of the archive material, I could already appreciate that my task as archive volunteer, in working to help conserve, catalogue, and eventually digitise the Braddon collection, was very much in line with Wolff’s thinking. Working with these items, an extensive collection of manuscripts, artworks, letters, and dusty books, is primarily to recognise their importance as historic artefacts and to ensure they are preserved and made accessible to all who might find them useful. And this potentially goes beyond scholars researching Braddon herself, because although the collection is centred around her life and authorship, there are many items that date from after her life, belonging to her children and extended family.

Mary Elizabeth Braddon (1835-1915) is perhaps best known for her sensation novel Lady Audley’s Secret (1862). Although she was a prolific writer of popular literature in her time, until fairly recently Braddon was considered a minor novelist. Towards the end of the twentieth century, Braddon has become more recognised as a canonical author and, in particular, instrumental in the rise of sensation fiction. 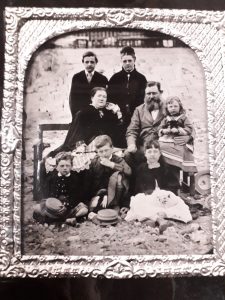 After a few weeks of working on the Braddon collection, a picture began to emerge of Braddon’s literary legacy, but also of her family: her children, their spouses, and her grandchildren, several of whom had gone on to be published writers themselves.

Braddon and her husband  John Maxwell had a large family, which included children from Maxwell’s first marriage, and in the University archive collection there are items from several members of the Maxwell family.  In order to make sense of it all, I created a family tree to understand the relevance of the items and who they belonged to, and their relationship to Braddon. This also helped place them in time, as items in the collection came from various sources, before they ended up in Augustine House, and they range in date from the early 1800s (i.e. an item of Braddon’s mother) to the 1960s (i.e. items from Braddon’s grandson Henry Maxwell) to the present day (i.e. documents and details relating to recent exhibitions of the Braddon collection). 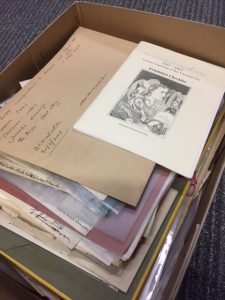 Other volunteers were also working on the collection, and taking steps to conserve all the items and catalogue them. During my own work with the collection, I came across many interesting things. As we didn’t have a comprehensive record of the contents – especially the items that didn’t belong to Braddon herself – there was a real excitement in re-discovering forgotten items. This included letters from Thomas Hardy and Sir Arthur Conan Doyle, addressed to Braddon’s son William Babington Maxwell (1866-1938), who was also a popular novelist during his time.

Much of the Braddon collection has been digitised by Gale Cengage and can be accessed through their ‘Women: Transnational Networks’ collection. Having a digital record of the collection allows historians and students of literature to access it more easily and makes the contents known to a wider community, thus preserving the past for future generations of researchers who, like Robert Lee Wolff, can appreciate the treasure in old books that have remained unopened for a long time.

This blog post was written by Sadie Palmer @saladempire who is an alumnus of Canterbury Christ Church University and an archive volunteer in the university’s special collections. She holds an MA in English (Literatures Medieval and Early Modern) and counts Lydgate and Chaucer among her interests.

Kept in the family since Braddon’s death in 1915, the Archive has been held from 2012 by the International Centre for Victorian Women Writers

The Library is currently looking for volunteers to work with our archives and special collections so if you are interested in uncovering the stories behind the letters, manuscripts and books, please register your interest at the library point in Augustine House or email ian.simpson@canterbury.ac.uk 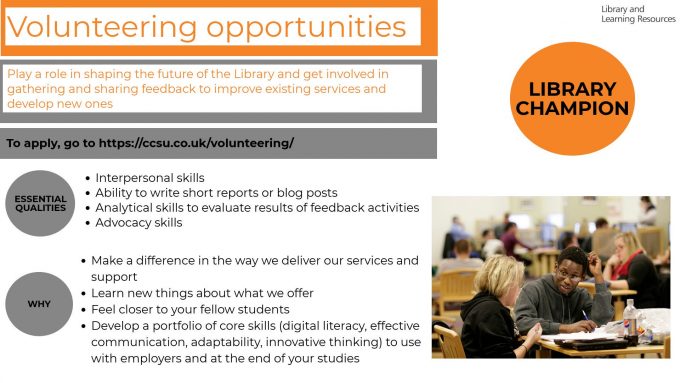 Looking for an interesting volunteering opportunity? Become a Library Champion 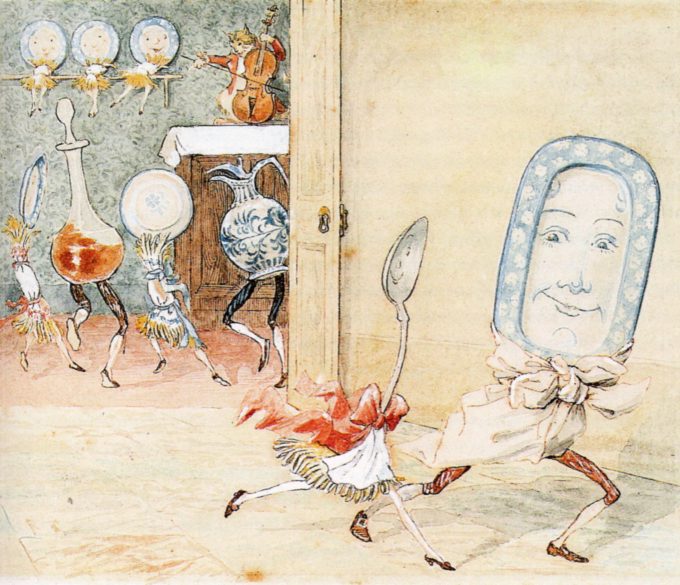 Welcome to the Historical Collection: a wealth of eccentricity