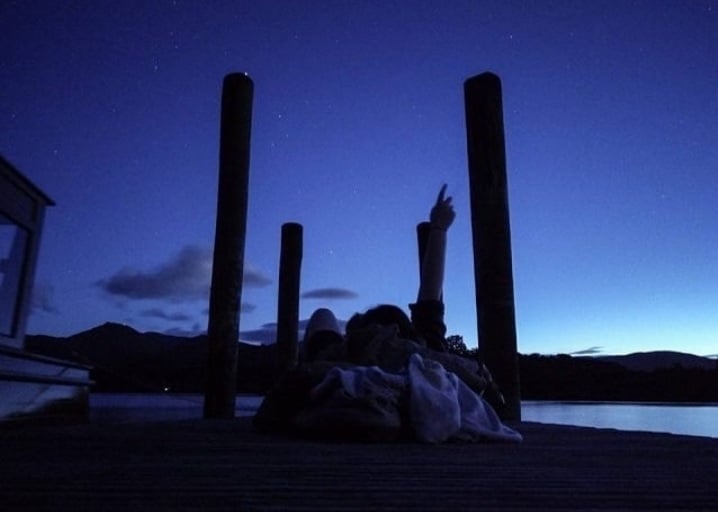 When I sat down to write this introductory post, I panicked, because I don’t have a whole lot to say about myself – I could tell you where I come from (Hastings, like the Battle Of), what I studied at CCCU (Creative Writing at BA and MA because one is clearly not enough), or what my dream job is (an astronaut, a writer, or both). But that would take up exactly 74 words and that’s not enough, so instead, I’m going to tell you five facts about me, that sum me up as a person, and I’m going to give zero guarantees that any of them are true.

I’ll set the scene: it’s the middle of summer and we’re on a lake. We’ve been canoeing since we were little, and on this particular day, we’re out with some friends and one of them has fallen in the water. I lift my canoe paddle, wielding it, perhaps, like some holy weapon of retribution, ready to smite him with the best splash of my life, when my brother slips up beside me, a shadow, a ninja, and—WHACK. I break his nose.

It was at a forty-five degree angle up his face for six weeks afterwards. I no longer feel bad about this.

I was a Percy Jackson kid who ended up in a Creative Writing degree. Yes, my dissertation was a retelling of The Odyssey. And yes, through my research, I came to absolutely loathe one of Greek history’s most famous heroes. But, factually, he cheated on his wife multiple times, killed all of Penelope’s suitors (and attendants) buck naked, and then, after twenty years at sea, got bored within a month and packed up to go on another adventure. I also hate his son, but that’s because most men chosen by gods are a bit full of themselves.

The snake plant is called Kaa for obvious reasons. I bought it at the same time as my echeveria, Bloo. Then there’s the original three succulents, although I don’t know their species: Heather, Bluebell and Lavender. I named them after the words on the pots I planted them in. The Lucky Bamboo is Po, because Kung Fu Panda is better than you want to admit it is, and the crassula is Totally Tubular, because of the surfer dude voice in my head when I say it. There’s Nobby, my newest, Spikey in a triceratops plant pot, and Jonah in the whale my housemate accidentally stole from Tesco. And finally, Nicolas Angle, my first ever plant, my peace lily, who is three years strong but showing every sign of wanting to just give up and die.

And I do it, too. Absolutely no one enjoys it.

Space is my Thing. I love it, I love learning about it, and I tend to keep track of when the next rocket launch is going to happen. It’s a bit of a guilty pleasure however, because as much as I love space, a single rocket launch can produce anywhere between 200 and 400 tons of carbon dioxide. SpaceX’s upcoming Starship and Super Heavy are producing a whopping 2,683 tons of carbon dioxide, not to mention the numerous other pollutants that comes from burning insane amounts of rocket propellant and liquid oxygen.

Travelling to space is ridiculously bad for the environment! (Yes, even reusable rockets!! They’re awful for it too!!)

Still. If NASA approached me, I wouldn’t turn them down.