Here Be Dragons (on Becket Lawn).

Here Be Dragons (on Becket Lawn). 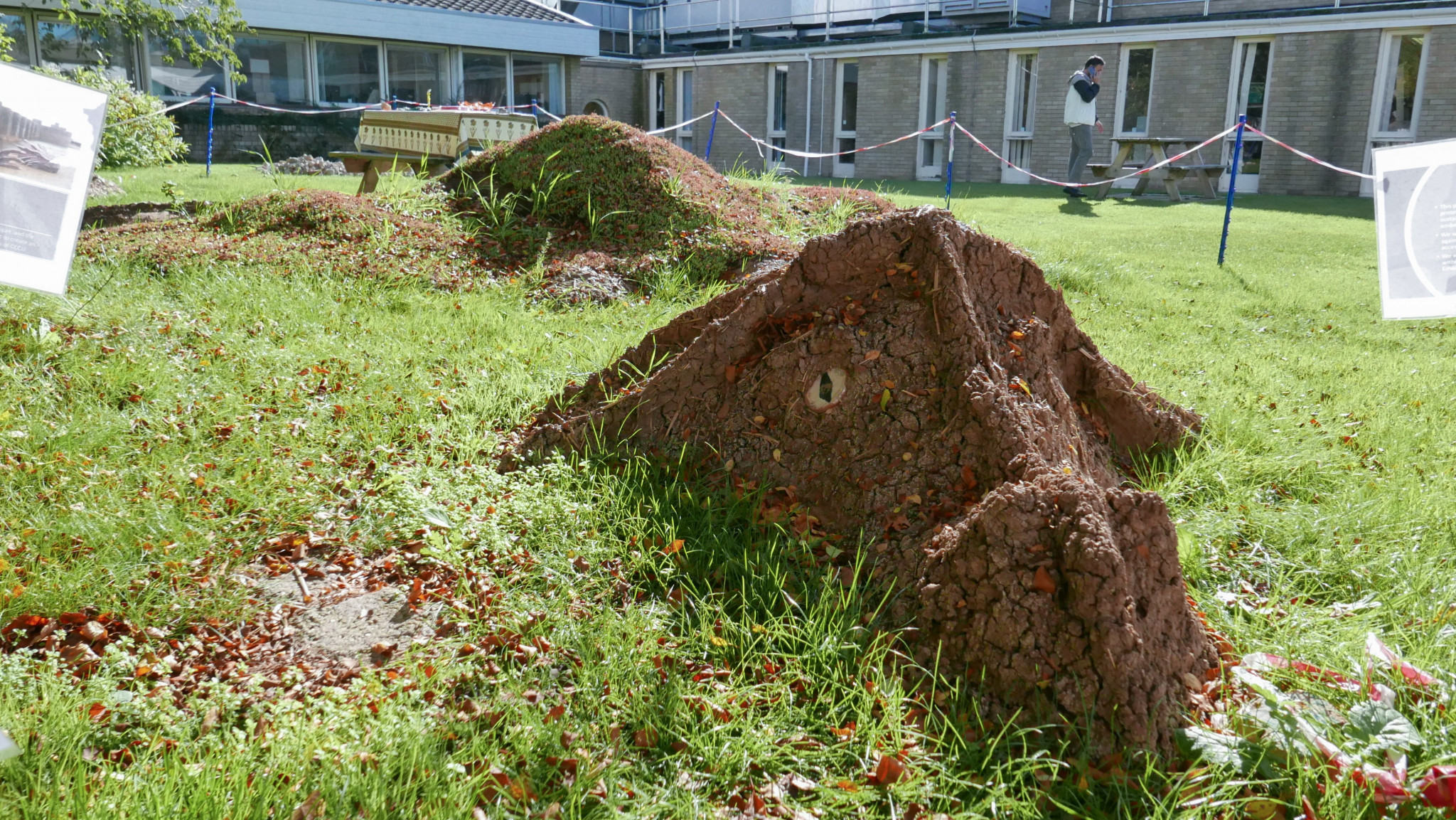 The dragon on Becket Lawn has finally got a name. After a month-long poll, in which several names were on the docket (including Idris, of Ivor the Engine fame; Dragony, surname McDragonface; and Firebreath, straight from The Elder Scrolls V: Skyrim), the clay and moss dragon has been deemed Spiro, after the classic video game Spyro and the Latin phrase, dum spiro spero – “While there’s life, there’s hope”.

If you haven’t yet seen the dragon, it’s been steadily growing from a chalk outline in the grass for a number of months, beginning in back in June with a small number of volunteers. The process of creating the dragon involved hefting wheelbarrows of rubble into the outline and building it up into the body; wings on either side, clawed feet at the front, a head and a twisting tail looping over itself. After, the rubble was covered in chicken wire, sand to fill the gaps between rock, and hessian to hold it all in, before clay was made and slathered on top.

Finally, a mixture of sedum for the warm months, and “moss soup” – using a mix of Christ Church’s Three Choughs Ale and the non-potable dregs from a local micro-brewery – for the wetter, colder months, was painted on top, allowing the entire dragon to grow green. And, as moss is excellent for carbon capture, it will also be green, too.

The project was spearheaded by Senior Research Fellow in Medieval and Early Modern History, Dr Diane Heath, with a small army of help across the various months, including British Studies Sessional Lecturer, Dr Pip Gregory, a number of students, staff members, people from the local community – including children – and the local Scouts group.

Behind the dragon was an idea to enable the interaction of history, special needs, and the climate crisis. History, as the dragon is Medieval in style and context, and Christ Church is built upon the same site as the medieval monastery of St. Augustine’s Abbey. Special needs, as Dr Heath’s goal with her project, Medieval Animals, is to engage families with special needs children with their local ‘green’ heritage.

And the climate crisis, as dragons often represent many negative traits – especially ones like greed, which led to our current climate emergency. The dragon, however, is also a protector and a symbol for good in medieval heraldry, so although the initial attempt at covering the sculpture in moss failed when the moss died in the hottest summer Kent has on record, there is also hope that the moss will take better in cooler conditions and turn the dragon into a mossy emerald green figure for climate mitigation.

Since the first dragon was built, a second, smaller one has also begun taking shape. The baby dragon is being built right beside the original, using the same method. This does mean that if you weren’t able to get involved with the original dragon – there’s still time! Dragon building occurs from 2pm every Wednesday on Becket Lawn, and all help is appreciated.

Spiro was created by Dr Diane Heath with the help of Dr Pip Gregory, the Grounds and Gardens team, the Academy for Sustainable Futures, Student Green Office, and a number of local community members, staff, students, and International Students. Dr Heath would like to thank all those that got involved, including Max, John, Bethany, Pip, Laine, and Eli.