A Day at Wildwood.

A Day at Wildwood. 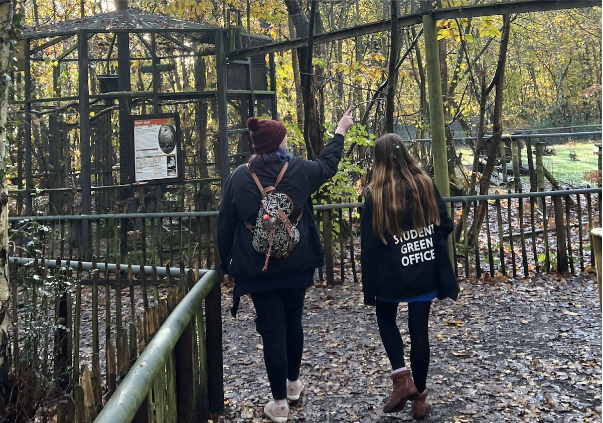 Did you know that Magpie Inkcap mushrooms used to be a common source of ink for writing, drawing and painting? Or maybe that beavers avoid being squashed by the trees they chew through by listening to the sound of it creaking and judging what way it’ll fall?

Or perhaps you’ve heard of Wildwood Trust, a discovery park located in Herne, home to over 200 animals and just a short trip from Canterbury. Sitting on 40 acres of ancient land, Wildwood is centred around the conservation and restoration of wildlife, offering fairly priced and interactive days out all through the week.

We were lucky enough to be given a tour around the beautiful grounds as part of a CCCU-organised event and learn all about the history of the land, its wildlife and Kent as a wider whole. Our tour guide for the day, Steve, met us at ten o’clock (an early and slightly chilly start to the day!), and we set off down one of the natural winding footpaths cutting through the park.

Lasting four hours in total, we were able to see reindeer, foxes, crows, rabbits, otters, bison and many other animals up close, often just a few feet from the path. Alongside this stunning array of wildlife, the grounds itself were breath-taking, especially with the autumnal foliage in full swing, and Steve was a fountain of never-ending knowledge, patient and diligent in his detailed explanations and answering of questions.

In fact, the questions from the start of this post were just two of the many things I learned from Steve, such as how you can tell the age of a reindeer in captivity by looking at its antlers, counting the branches, and then adding two. Or how the hibernation of bears was once mysterious enough to inspire centuries of legends that were then literally told in the stars; the Native American tale of Ursa Major (The Plough) being comprised of a bear (the ‘bowl’ of the constellation) and three hunters giving chase (the ‘tail’) spanning the entire year as the constellation moved through the sky, depicting how each time the bear was killed (hibernation), it would re-emerge as if from the dead the following year.

Or, for something a little more local, there are also legends of the Red-Billed Chough, a bird believed to be that of Saint Thomas Becket’s, and how it obtained its distinctive red beak and feet by landing in his blood after his murder. These magnificent birds were once native to Canterbury, their curved tapered beak allowing them to probe through soil to find nutrients along clifftops.

As part of Wildwood’s ongoing aim to maintain and restore wildlife diversity, there are plans to release Choughs back into the Kentish wild in the places they once called home. This is just one small part of Wildwood’s mission, though, and their most ambitious and anticipated project is perhaps Wilder Blean, an initiative in which “nature is given the tools and space it needs to recover itself.” The plan is to release animals such as bison and pigs to terraform the landscape and promote diversity and the healing of our natural spaces.

Which, did you know that having bison in an area drastically increases the success of other wildlife species? For example, bison fur is very thick, making it a perfect insulator for things such as birds’ nests. The warmth provided by their shed fur ensures that nests are evenly warmed, promoting larger and healthier clutches of eggs.

Or how, alongside terraforming the land by rubbing the bark off of trees or felling them entirely, boars routinely turn over the soil, revealing insects for birds to eat and unearthing seedbanks. Once this soil has been turned and the seeds exposed, the area blooms with fresh growth of flowers and other vegetation that would have otherwise remained buried.

Although the wildlife at Wildwood is by far its main attraction, there are also several lovely facilities on-site, such as a log-cabin-inspired café, a cosy gift shop, a play area for children with ice cream in the summer, and a myriad of benches across the grounds for the perfect picnic spot. Whether you’re visiting in the height of summer or the freezing depths of winter, there’s always somewhere you can warm up (or cool down!) with beverages, freshly made food and seasonally appropriate accommodations (we were all big fans of the woodburning fires in the café and gift shop!).

Wildwood is open every day of the week, from 10am to 4pm, and offers a host of events, experiences and days out. Their website, found here, has more information on costs, news and all available trips. We hope you enjoy your visit as much as we did!