I’m Sorry, Did I Starmer? Coronavirus in Parliament and Oppositional Scrutiny.

I’m Sorry, Did I Starmer? Coronavirus in Parliament and Oppositional Scrutiny. 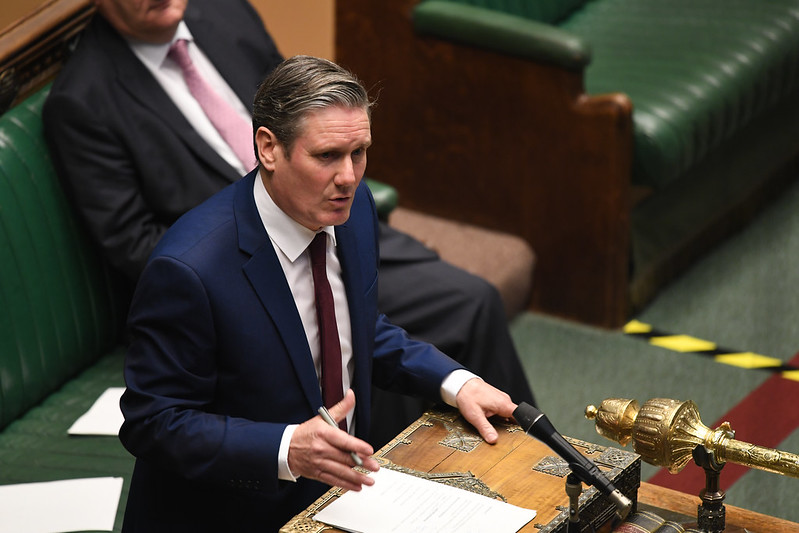 Amidst the backdrop of the public health crisis that is the COVID-19 pandemic, the greatest test of national unity since WWII, a welcome wave of pragmatism is sweeping through the Labour Shadow Cabinet.

In the adversarial nature of UK politics, the Official Opposition’s role has been its namesake; oppose by scrutinising (preferably constructively) and offering a shadow policy. The Coronavirus Act 2020 was introduced to Parliament on 19 March and passed without a Commons vote, receiving royal assent on 25 March. The Act has allowed Boris Johnson’s government to effectively bypass much of the standard Parliamentary scrutiny that it would normally go through. Some of this is understandable as the government needs to be able to respond quickly to the ever-changing health situation. However, many MP’s have felt that Parliament has been side lined over the course of the pandemic, leading to a sense of frustration amongst MP’s of all parties. Since the Act was passed 121 of 188 Coronavirus-related Statutory Instruments have ignored the 21-day rule and 38 have come into effect before even being laid before Parliament. The 1922 Committee of back bench Tory MPs gave procedural force to these concerns with the Brady amendment. Yet ministers still dismiss these concerns with Jacob Rees-Mogg, the Commons leader, casually labelling the anxieties as “absurd”. Subsequently, Opposition scrutiny has become even more important over the course of the government’s criticised handling of the pandemic; just 32% of people think the government is handling COVID well.

The Opposition’s response to the government’s pandemic handling began under Jeremy Corbyn, as Starmer wasn’t elected Leader until 4 April. A stark contrast in Opposition scrutiny can be seen between them. If Corbyn’s PMQ performances were an impassioned, ideological wildfire then Starmer is a slow, controlled burn. Upon becoming Labour leader, Starmer stated in a victory speech in the national interest “Under my leadership, we will engage constructively with the government” and “not opposition for opposition’s sake”. The goal seemed to be to scrutinise government policy without continually undermining it during a national crisis in the name of tribalistic red vs blue politics. Considering Boris Johnson’s majority of 80 and Labour’s recent electoral failure, an Oppositional motion of no confidence during a health crisis is a no go. However, this was in the early days of COVID and recently Keir Starmer has gone on the attack.

Appealing outside the Commons, Starmer publicly called for a 2 to 3-week circuit breaker lockdown. Arming himself with the words of SAGE, Starmer criticised the outsourced £12Bn test and trace system as having “marginal impact”; making it look as though the government was ignoring its own experts. Starmer has since posed basic questions to Johnson during PMQs such as how the tier 3 lockdown could be exited. Boris Johnson responded with figures like the R number with a confused tone. With the poorly viewed government handling of the pandemic, the worry of sowing political division has ended, and the questioning of government competence is in full swing.

Further issues such as the provision of free school meals outside term time, championed by public figures like Marcus Rashford are also being supported with competent Oppositional scrutiny. Recently the Shadow Education Secretary Kate Green poignantly criticised the government, drawing contrast between children going hungry and the £7000 daily pay for test and trace consultants; addressing a key issue while also relating it directly back to the government’s pandemic handling. Even when on the attack the Opposition seems more calculated and restrained in its responses, less reactionary than the previous leadership. Starmer’s style seems to be rooted in his legal training, conducting PMQ’s like a barrister, taking the PM’s own words and weaponizing them while remaining calm, with a flustered Boris avoiding direct answers.

Johnson’s career was made playing the role of a humorous, scruffy haired, social liberal. Against Corbyn, he looked down to earth. Juxtaposed, against the former head of the Crown Prosecution Service it is night and day. The verbal undressing Boris receives from Starmer on a near weekly basis has transformed his carefully crafted image from fun natured into a man described in Ashcroft polls as “out of his depth”; making for soundbites that resemble Law and Order more than PMQ’s. Members of the British press have picked up on this, labelling it as “the lawyer vs the showman.” And the thing is: it’s working. Starmer has been polling higher than Boris for preferred PM and the parties are now neck and neck in voter intention polls. Considering the dramatic defeat Labour suffered last year, its worst in 79 years, such a resurgence in voter confidence is a ray of hope for the Labour Party.

Based on the last six months Keir Starmer looks set in PMQ’s to continue doing what he has been doing for the last several months, owning a donkey.

This blog was submitted as part of the assessment for Parliamentary Studies on 23 October 2020.