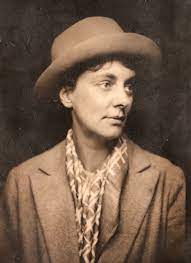 A British artist and political activist who was a committed Communist and Feminist and who fought against the rise of Fascism in the 1930s.

If you think about Doris Brabham Hatt’s background and early life you couldn’t imagine that she would have been so politically motivated and would have had such left-wing leanings, so it just goes to show how our experiences can influence our beliefs.

Doris came from a very well-known and comfortably off family and was born in Bath in 1890, the middle child of William and Mary Hatt. The Hatts ran a successful company that encompassed perfumery, hairdressing and wig-making and her mother was also a music teacher. She went to Bath High School and then on to finishing school in Germany. Whilst she was there in the early part of the 20th Century, she fell in love with many of the paintings when she visited the Neue Galerie in Kassel. As its name indicates, it was newly built in the 1890s and mainly focused on modern German art.

When Doris returned to the UK, she decided to study art and to make it her career path and she enrolled at Bath School of Art, then Goldsmith’s College and finally at the Royal College of Art in London.

Her brother, Richard, was a journalist and was posted to Vienna in the early 1920s. When Doris visited him, she took woodcut classes at the Vienna Art School for Women & Girls. She also made several trips to Paris where she rubbed shoulders with artists such as Picasso and Léger and became influenced by the Cubist art movement.

Doris first had her paintings shown in London in 1918 and continued to work and have several exhibitions until the 1960s. Like most artists, her work developed and changed over the years. She strived for simplicity in her paintings and brought discipline and order to the planning of her work and its eventual outcome. One of her later paintings Boats in Harbour is shown below:

I think this is a good example of her precise and straight-forward style whilst, at the same time, evoking the feeling of the movement of the boats, the gulls and the waves. John Berger, the writer and art critic, felt that she had a good sense of colour.

Doris was also influenced by the Bauhaus/Art Deco movement relating to architecture and design and, after World War I, she and her mother moved to Clevedon in Somerset and bought a plot of land. Initially, they lived in a basic bungalow on the site, but in the 1930s, she was able to have built a Modernist home after an inheritance from an aunt. Her new home, Littlemead, is shown on the right below and an example of the Bauhaus style which she so admired is shown on the left:

After a rather sheltered upbringing in Bath, Doris was horrified and became greatly affected by her experiences of the poverty she witnessed when she was studying in London. This, and the dreadful sight of broken and wounded soldiers returning from war, spurred her to join the Independent Labour Party. She was opposed to the war and to conscription, and she also became aware of the growth of the Women’s Suffrage movement.

Her commitment to Socialism took a further step in the 1930s when she joined the Communist Party of Great Britain in 1935, as she was concerned about the rise of Fascism in Germany and beyond. A couple of years later, Doris and her partner travelled to Russia for the Pushkin Centenary Jubilee celebrations which were held in Leningrad (now St Petersburg) and Moscow. After the Second World War, and still committed to Communism, Doris twice stood as the Communist Party candidate for Clevedon Urban District Council but, unsurprisingly, was not successful. Despite this, every Friday night for several decades, she visited the local pubs to sell copies of the Daily Worker which later became the Morning Star. She sold quite a few copies, not necessarily for the political comment, but apparently for the useful racing tips!

For many years, she and her partner, Margery Mack Smith, hosted Sunday afternoon meetings attended by left-wing supporters and sympathisers from myriad spheres such as the arts, politics and journalism. As part of her commitment to the communist ethos, she rejected many offers to buy her works during this period, but she continued to exhibit her paintings in galleries, mainly in England and in Paris.

However, the couple had previously planned to move to another home that Margery had inherited from a relative, not far away in Watchet also in Somerset, and so two chests of material had already been moved there and were, thankfully, preserved. This material was inherited by a friend of Margery, Gwen Webb, whose daughter gives a moving description of Margery’s last wishes:

‘What did Margery want? It transpired that she did not want her friend Doris to be forgotten. She did not want Doris’s remaining pictures or sketchbooks to be lost, forgotten or destroyed. She wished that her lifelong friend should be remembered. She wished that we should make Doris’s work known to as many people as possible. Only when she was certain that she had conveyed her wishes to us, and that we promised to fulfil them did she rest. Then her eyes smiled out of her crumpled face. She died that night.’  (Taken from the website Doris Hatt et al).

Doris died in 1969 and left her body to medical science. There is no grave to visit, but she leaves her legacy of art which at last is being celebrated after years when it had appeared ‘tainted’ by her political views and her sexual orientation.  There have been a few small exhibitions more recently of her work and there’s a Doris Hatt Society that hopes to establish an archive and a scholarship in her name, which thankfully lives on.