Abjection, boobs, and a whole lot of glitter: My week with the Tate Exchange 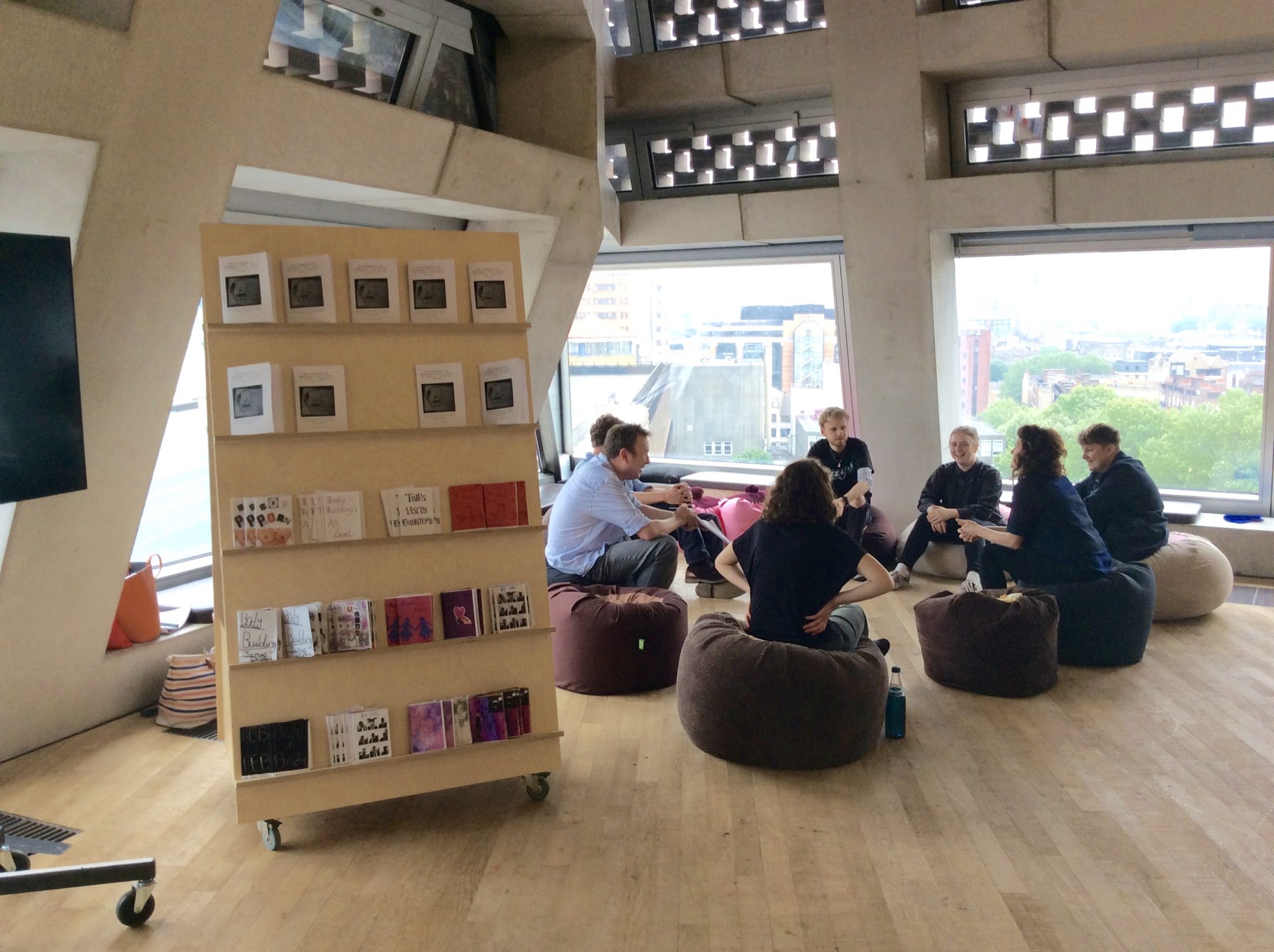 From Katarina Hill – Intern for Politics and International Relations.

There I am, 6.45am on a Tuesday, standing in the middle of Canterbury in the pouring rain. No, this is not the start of a new millennial craze, but rather the first day of my internship. I am waiting to be picked up and taken to Dover, to help transport a number of items to the Tate Modern for the upcoming Tate Exchange exhibition. Fast forward an hour, and I am sitting in the back of a minibus surrounded by mannequins, a life-size dress-up doll, and numerous boob bags (beanbags with nipples – yes, I am serious). These are just some of the artworks by the young people at Astor College, Dover in association with artist, Kelly Green.

We arrive at the Tate Modern around 10am and with only two trips in the lift, we have managed to transport everything to level 5 – our exhibition space. Our young artists, whom I have yet to meet, are not arriving for another two days, so I am now trusted not to damage their hard work (no pressure). A couple of hours later, following instructions by our lead artist, Kelly Green, we have successfully set up the collection of works entitled ‘What Are You Looking At’. The pieces deal with the concept of ‘otherness’, and forms of social abjection related to class and gender; and invite the viewer to interact with the artwork rather than just look at it.

Wednesday, I am back at the Tate Modern for the opening of the exhibition which CCCU and the Astor College kids are partaking in, along with the organisations People United and Valleys Kids. The boob bags now form our feminist reading corner, in which we engage in some ‘classy’ workshops throughout the day. The workshops on social class relations revealed me to be much more posh than I generally care to admit, placing me at the top of the class line among the other workshop participants. It also raised some interesting questions on class: can you be in a class transitional phase? Is shopping at Primark a working class trait, or merely a cost-effective option for all classes? In all honesty, I have no clue. Growing up and living in Denmark for 19 years, the concept of belonging to a social class was something that rarely concerned me. I am certain that all countries enforce social class division to an extent, but in Denmark it is not a label used to define oneself the same it is in the UK. Since moving to the UK, I am suddenly very aware of just how middle class I really am, and how ‘middle class’ seems to be a four letter word. The workshop struck up quite a fun debate on what it means to be a ‘chav’. Everyone has different connotations to the word, and for most it is probably a derogatory term for someone with an intense passion for tracksuit bottoms. For Kelly Green however, it is something to be proud of, and she is on the road to reclaiming the term ‘chav’ through playwriting and tattoos galore. When I was not discussing class relations and ‘chavs’ whilst surrounded by boobs, I had a chance to engage with the people from the Welsh charity Valleys Kids. Their pop-up youth club with table tennis, a pool table, fancy dress, and music was popular among many of the visitors. Although, we were faced with some harsh realities when the young people of Rhydfelin (the people behind the pop-up youth club), told us the story of how their own youth club had been shut down and left them with nowhere to go. A live performance accompanied by a short film hit the audience right in the heart, but came to a happy close when everyone was invited to join the dance party and parade around the exhibition. In a quieter corner of an old fashioned Welsh living room made entirely out of cardboard, the lovely people from Valleys Kids taught me how to crochet! I can tell you that it is a very addictive activity, and returning to the final workshop after finally mastering the needle-yarn tension was not easy.

On the Thursday, our young artists from Astor College arrived and their pieces were ready to be explored by everyone. We were quickly making our mark on London at our makeup station, a piece on how gender identities can be constructed and broken down through use of makeup. Chloe and Stephanie where giving glittery makeovers to anyone that felt their inner unicorn needed to make an appearance; and as often is the case with glitter, it was everywhere in no time. People United had set up an interactive task for people to sit opposite a complete stranger, and look at them in silence for 20 seconds. Then you write down 5 things about this person: what they like or dislike, if they have pets, etc. Either I am very easy to read or the woman opposite me was psychic, because everything she guessed was correct. They were all very nice things, so I was rather pleased to be honest. Friday’s events were quite similar to Thursday’s, except there was even more glitter and I had the chance to chat to our visitors about their thoughts on ‘What Are You Looking At’ and their opinions and beliefs regarding class and abjection. The question of what middle class people would think of the art, came with varied responses. Some were convinced the middle class would enjoy the art, while others were adamant that they would not. Through these chats I learned that people’s perceptions of class can vary quite a lot, but that their perception of the term ‘chavs’ are all very similar. I was informed that sexism is a non-issue, and simply a natural occurrence as a result of human nature and reproductive needs. Most of the visitors I spoke to were however very concerned with gender related issues, especially within the lower classes.

Saturday was my last day working with the Tate Modern as my ‘office’. I engaged in some more chats with exhibition visitors, this time with a discussion on gender stereotypes in relation to parenthood. The boob bags proved a hit with the toddler demographic (for obvious reasons?), and the little ones even decided to have a ‘read’ in the Zines we had made and printed for the reading corner. I finally had a chance to get to know the young people from Astor College a bit better, and we ended up in a longer conversation about school dress codes at which there was a lot of eye rolling (on my part), at how girls for some reason are not allowed to express themselves without supposedly being distracting. My week concluded with a personal triumph as I mastered a new crochet pattern, and a bittersweet goodbye to all the wonderful people I had met during my time at the Tate Modern. The Astor Kids were very excited about a trip to Nando’s, and I said bye-bye to my ‘London office’ and pondered what I had seen and learned over the week on my way back to Canterbury.