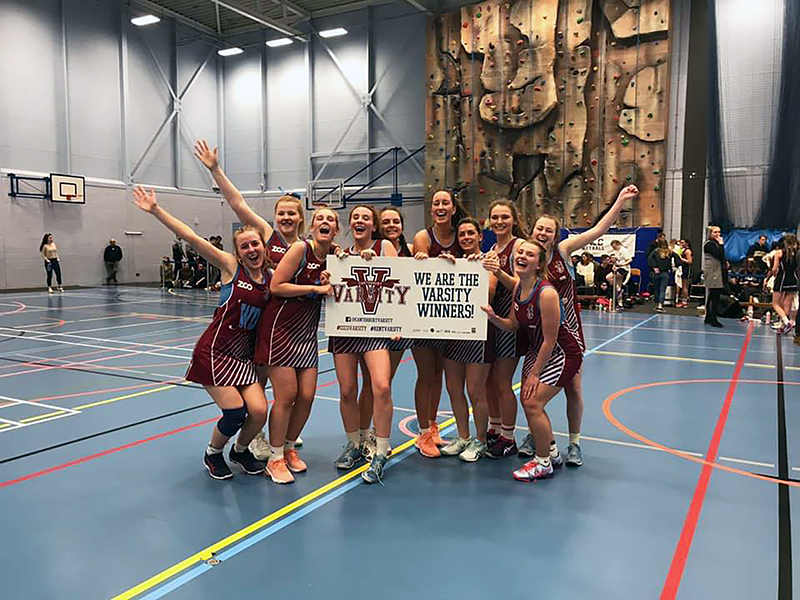 I don’t come from a family of athletes. As a child I was sent to sports clubs as a way of improving my confidence, to bring me out of my shell and as a way to socialise.

But, soon sport became not only a way to socialise but a way to keep my body and mind healthy, a haven from day to day life and a way to offload. Aged 11, I started playing netball first at school and then joined a local league with some friends from school – we have now been playing together for 10 years. In the first season, we didn’t win one game, but we kept going because we enjoyed being together. Netball was the initial foundation of our friendship and netball bought us even closer together and still does.

I now play for 3 different teams, both at home and Uni and can’t picture my life without netball…

I joined the netball team at University in my second year as a way of keeping fit and meeting new people. Being part of a small cohort and commuting to lectures, I didn’t have much opportunity to mix with people from other courses but netball completely changed that! I now play for 3 different teams, both at home and Uni and can’t picture my life without netball. I have been so lucky that it has introduced me to some of my best friends and has provided me with so many opportunities to better improve myself.

Netball has improved my confidence, taught me resilience, leadership and showed me how strong I am. Sport in general has shown me the importance of friendship and teamwork and taught me so many skills that can be transferred into day to day life and work.

NETBALL IS MORE THAN JUST A SPORT

I joined the netball club at University as a way to make new friends and to generally give me something different to do. I hadn’t played at all since school and didn’t play often even then. Netball quickly became the best part of my first year at University, it was great for exercise but also to help focus me on work and to help organise my time.

I met girls on the first training session that have since become my closest friends. Training after training new skills are gained as well as firm friendships and there is nothing quite like learning something new as well as having a laugh with a fantastic group of girls in the evening.

Sport has become a big way for me to de-stress since I’ve started Uni, and it’s always lifted my spirits to see girls cheering each other on at games or training…

Sport has become a big way for me to de-stress since I’ve started Uni, and it’s always lifted my spirits to see girls cheering each other on at games or training. The best thing about sport at Uni isn’t just meeting new people, but also the united Team Christ Church experience, which opens doors to a range of people who support each other come rain or shine, week-in week-out. Netball has taught me leadership skills as well as confidence in myself and learning to work as an effective team!

I couldn’t imagine my time at Uni if I hadn’t joined such a wonderful team! Watching the girls develop, support and form bonds with each other throughout the year is the best part of sport for me.

I started playing sport in my early years of primary school and haven’t stopped since. Sport has been a passion of mine since a young age, but netball has been a sport I specifically enjoy playing, due to the tactics involved and quick gameplay!

The feeling I have when participating in sport is irreplaceable and derives from playing football when I was younger. Every day after school, I’d be in the garden kicking a ball about, trying to learn a new skill to show off to the boys at school at lunchtime the next day. It was a never-ending competition which has led me to where I am now; studying to be a PE teacher, so I can spend the rest of my life teaching other girls to love sport as much as I do.

I really enjoy playing sport, and it has a massive positive effect on my mental health…

Representing Canterbury Christ Church University has improved the quality of my time spent at University and I wouldn’t change it for the world. I honestly can’t imagine my life at Uni without Team Christ Church, due to all of the friends I have made from being on a sports team! I really enjoy playing sport, and it has a massive effect on my mental health and attitude towards life, which I can forever be grateful for.

Netball has been a massive part of my University life and I have made the best of friends over the last 3 years. Playing a sport has helped boost my self-esteem and is great for stress relief.

With netball being a team sport, it’s nice to have that shared goal of winning which boosts morale. I’ve always been interested in sport but my love for it grew from playing with my friends at school!

RT @CanterburyCCUni: Five tips from Psychology lecturer @AnneCooke14 to help our mental health and wellbeing during the #COVID-19 lockdown.…
@CCCUSport

RT @christchurchsu: Tonight would've been Sports Federation Dinner, but that hasn't stopped members of #TeamChristChurch getting together o…
@CCCUSport

🙌Join us for our free Facebook Live HIIT & Abs class today at 12:30! Joining in is simple - just like and visit our… https://t.co/pC7ly9n4CN
@CCCUSport