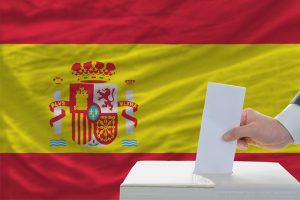 Spanish politics has featured highly in media headlines over the last few years from the breakthrough of parties such as Podemos and Ciudadanos (Citizens), the failed unilateral declaration of independence by the Catalan government in 2017, to the cascade of corruption accusations and charges that ultimately precipitated the collapse of the conservative PP government in June 2018. The latest general election, however, did not register any signs of voter fatigue. Turnout was over 75%, well above the average recorded in general elections since the Spanish transition to democracy.

The Spanish Socialists (PSOE) under the leadership of Pedro Sánchez triumphed in this hotly contested multi-party election, securing 123 seats (38 more than in 2016), albeit a significant number short of a majority. In second place, the ironically-named Popular Party (PP) won just 66 seats, a total loss of 69 seats. The haemorrhaging of support for the Spanish conservatives underlined the role played by the numerous corruption scandals that have engulfed the party in recent years, but also demonstrated the growing popularity of Albert Rivera’s Citizens Party which has seriously challenged the PP on the centre-right of the ideological axis. Established in Catalonia as an anti-nationalist party which quickly transformed into a state-wide pro-Spain and explicitly Spanish nationalist party, Ciudadanos won a total of 57 seats, picking up an extra 25 than in 2016.

The major talking point of the election, however, was the election of 24 parliamentarians representing VOX. Established in 2013, VOX is a far-right ultranationalist party whose anti-Islamic, anti-immigrant and pro-Spanish unity rhetoric resonated with disillusioned PP supporters. The electoral breakthrough of this far-right movement is a new trend for Spanish politics, but the rapid rise of VOX is in line with the identifiable trend of the spread of right-wing populism across Europe, including the Lega Nord and Five Star Movement in Italy and Le Pen’s National Rally/National Front in France.

The fragmentation of the right as well as infighting within Podemos delivered a clear electoral victory for the Spanish socialists. The electoral breakthrough of VOX is symptomatic of the wave of right-wing populism pervading Europe and underlines the growing disillusionment in Spain with the Spanish establishment. This increasing popularity in ‘making Spain great again’ (one of VOX’s electoral campaign slogans), combined with the ongoing push by pro-independence parliamentarians in Catalonia for a legally-sanctioned referendum on independence, illustrates the polarised political environment Spain’s new government will have to contend with. Buoyed by the electoral results, Mr Sánchez and his team have proclaimed that they are up for the challenge. The stakes, however, have never been higher.

Paul Anderson is a Lecturer in Politics and International Relations at Canterbury Christ Church.