Banking on Banksy: The Celebrity Bias Within Political Art 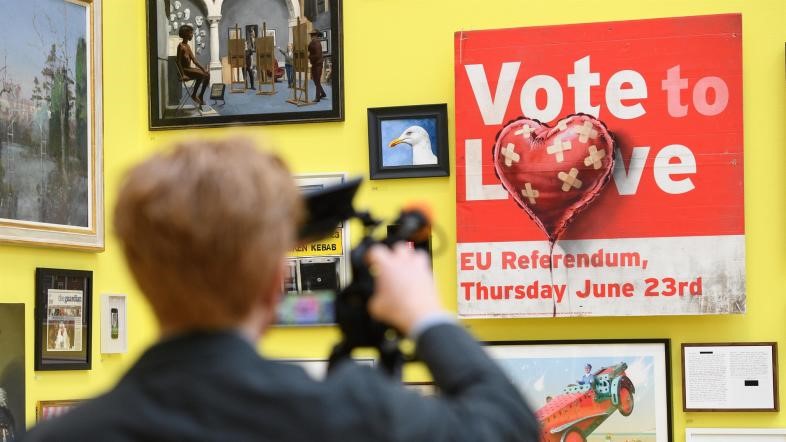 From Katarina Hill – Intern in Politics and International Relations.

You know how fashion designers and celebrities get away with selling really ugly or extremely basic clothes for hundreds, even thousands of pounds, because it carries their name? Take Kanye West’s clothing line for example: you can find half of it in Primark for a tenth of the price, but because it is ‘Yeezy’, a vest top suddenly costs you £100. There seems to be a similar trend in the world of politically charged art. There is a fine line between ‘offensive’ and ‘artistic’, and that line is usually where the artists name is written. Art critics, magazines, and galleries are often more than happy to praise ‘creative’, ‘witty’, and ‘powerful’ art if it carries a certain name. A name such as Banksy.

Conducting interviews on the CCCU collaboration with the Tate Exchange gave me a lot of curious insights, including the notion by one interviewee that society has an issue distinguishing what is acceptable and what is not. Graffiti was used as an example, and the idea that even though it is art, it is generally deemed unacceptable – “unless your name is Banksy”. Last week I then came across an article on an art piece Banksy submitted for the Royal Academy Summer Exhibition. The piece (see picture) was originally submitted by Banksy under a pseudonym, and was rejected. However, when the Royal Academy contacted the artist asking for a contribution, he resubmitted the very same piece which is now a part of the exhibition. Taking a stab at the EU referendum with his art, Banksy’s initial rejection proves that sometimes you need a recognisable name to get your point across.

So when is political art acceptable? And when is art good art? When do we cross that line between ‘artistic’ and ‘offensive’? The Royal Academy Summer Exhibition apparently features several installations of a contemporary political nature; and such an institution showcasing something like that, must tell you that at least some of it is acceptable and undisruptive (we would not want to upset any of the patrons, now would we?). Personally, I have known many people to make rather candid works of art, whether it is paintings, plays, or dance. I myself have made a few political choreographies in recent years, some more metaphorical than others (neither of them splendid works of art in all honesty). I can hardly see any of my friends’ art works, or my own, showcased in larger galleries or performance spaces. Not because they are bad, but because we are unknown, young (read: inexperienced) university students producing what to some might be perceived at crude and vulgar material. However, change the name to *insert any well-known artist* and we might have a good chance at a decent showcase. Obviously, I am not encouraging plagiarism (I do not have the money to deal with the lawsuits). I am merely trying to point out that the quality and value of a work of art and its message, is often not in the eye of the beholder, but in the signature in the bottom corner. Banksy’s ‘Vote to Love’ piece specifically, I would not deem crude at all – in fact I think it is rather clever; yet, it may have been interpreted as such by the more anti-EU demographic (I will refrain from passing harsh but probably true judgement on that particular group). I read through the comments on Banky’s Instagram post where he told the world how the Royal Academy had rejected him under a different name, and found several explanations offered by fans and critics alike for why the piece may have been rejected: Perhaps it was thought too serious until the name of an artist known for his sense of humour appeared? Maybe it was really just a bad piece, but the Royal Academy wanted to cash in on the well-known artist? Or maybe (a bit naively optimistic) they changed their minds after getting a good look at it the second time? Whatever the reason, it is hard to argue with the fact that being famous worked in Banksy’s favour.

I find myself contemplating how this outlook on art has affected the Tate Exchange exhibition. Hidden away on level 5 of the Tate Modern and hardly signposted, you would not necessarily expect to find any kind of confrontational art there. The other exhibitions by well-known artists, such as Joan Jonas, were well-advertised and located in rather obvious parts of the Tate Modern. Obviously, something like the Tate Exchange is not the most lucrative showcase, with free entry for visitors and even free coffee and tea. But why not put it up in the Turbine Hall for example? It was empty at the time, and lots of visitors had to pass through anyway, automatically giving the project lots of exposure. I am sure that had it been suggested, it would not have been feasible anyway due to issues such as safety concerns – fictional or otherwise. But surely a group of teens should not be allowed a Hyundai sponsored concrete block with a main entrance for a display of art concerning classism, sexism, and marginalisation. Best to hide the no-name, angry, hormonal beasts away and have people enter that world at their own risk. So perhaps political art is becoming more ‘fashionable’ when it comes to social acceptance. It does not necessarily matter whether it is good or not or what the message is, if there is a big name on the label, we will allow it. If a questionable dress can receive applause on the runway because it is haute couture, why should art not do the same? I guess as long as the big brand artists are at least using their platform for good, and exploiting the opportunity to get a valuable and truthful message across, the fame and celebrity bias may be rather harmless. However, if it stands in the way of talented artists expressing themselves and have their art deemed socially unacceptable, because they do not carry a bankable name, then we have a serious problem.