CCCU fires up the democratic engine with a Canterbury parliamentary hustings

On the 26th of May Canterbury Christ Church University had the pleasure of hosting a Parliamentary Hustings for the Canterbury and Whitstable constituency candidates. Candidates from Labour, Liberal Democrats, Conservative and Green party attended. We had a full house, with people even queuing out the door just to have a chance to listen to, and pose question to the candidates. A big thank you to those who sponsored this event, including: Ethnic minority independent council, CANDIFA, The Canterbury society, CDCD and Making politics matter. Also thank you to  Sian Pettman and Richard Norman for all their effort to make this possible.

Following introductions from Pro Vice-Chancellor Professor Mike Weed and Dr David Bates, Director of the Politics and International Relations programme at CCCU, there was a minute silence for all those affected by the Manchester attack earlier in the week.

Dr Amelia Hadfield, Director of the Centre for European Studies (CEFEUS) and Chair in European Foreign Affairs chaired the event, giving the four candidates two minutes to introduce themselves and a short plea as to why they should be voted in. Labour’s Rosie Duffield began by outlining that “Canterbury is not Conservative” and promising to scrap tuition fees, which was followed swiftly by a loud heckle, and an even swifter removal of the heckler.

Lib Dem candidate James Flanagan offered his apologies for any leaflets that people had received that showed him with doodles on. “My kids graffitied my election leaflets” he said, admitting this was an unusual beginning for a potential MP but one that got the audience laughing. Moving on to more pressing, issues James stated that “We promise a second vote on Brexit, Tories will only give you a second vote on Fox hunting”. Conservative candidate Julian Brazier got right to the point by stating that “I will fight for our country, for the best outcome in the Brexit negotiations”, which produced multiple heckles from the audience. Lastly, the Green candidate Henry Stanton was passionate in discussing local issues like homelessness and pollution, ending with “A vote for me is a vote for somebody fighting for Canterbury”.

With the candidates ready to go and the audience fired up, Dr Hadfield launched in the questions, which came from a variety of sources. Some questions were submitted by Canterbury residents via email, some by twitter using the hashtag #CCCUHustings17, others on Facebook, while others had posted questions during the preceding reception into the submission box. Lastly, Dr Hadfield took questions from the audience. The questions themselves covered a broad range of issues, including education, health care, climate change, homelessness, and of course Brexit topics including security and migration. International topics also included Syria.

Audience participation is of course part and parcel of any good hustings event; at this event however, one candidate in particular was the recipient of rather more audience participation than the others. Conservative candidate Julian Brazier remained very much at the mercy of the crowd in his various replies, receiving ‘boos’ in with every answer. When asked for example about his prospective support of LGBTQ+ community, Sir Julian spoke about how voting against same-sex adoption “was always based on what is best for children” which needless to say went down poorly with the audience. In contrast, the other candidates pledged their support for same-sex adoption and the LGBTQ+ community. A subsequent question on grammar schools put by students attending as part of Canterbury Academy triggered further passionate responses from the audience. Labour, Lib Dem and Green again closed ranks in discussing the stress put on children who fail the 11 Plus test, and refused to endorse grammar schools. The Conservative candidate however set himself apart by disagreeing with the overall approach to grammars. This split was particularly evident when the topic of NHS funding, and the local issue of the potential closure of the Kent and Canterbury Hospital was raised. Here, Labour, Lib Dems and Greens appeared united in singling out Julian for failing to make this local priority a national issue. Green candidate Henry Stanton for instance pointed out that Julian has raised a number of questions on the floor of the House of Commons, but never about issues regarding the Kent and Canterbury hospital, making it difficult to believe that it is “top priority”, as claimed. Perhaps the largest applause of the evening was given to Rosie Duffield when she stated in response to the tricky issue of negotiation that “conflict resolution requires talking to people you don’t agree with”.

The combination of a lively audience, tough questions and responsive candidates produced a successful hustings, one that left those in attendance with a clear understanding of all the candidates, and why they should (or shouldn’t!) vote for them. Whoever wins this hard-fought seat should remember that the members of this constituency stand ready to grill them again at the next hustings.

If you were quick enough to have found a seat on Friday, thank you for attending and for your participation. However, for those who could not attend, or would like to revisit the moment, you can watch the hustings by clicking on the following link:

If you would like to read more about this event there are also a number of articles from local papers, featuring the event, and also General Election observations made by 3 of our own CCCU students: 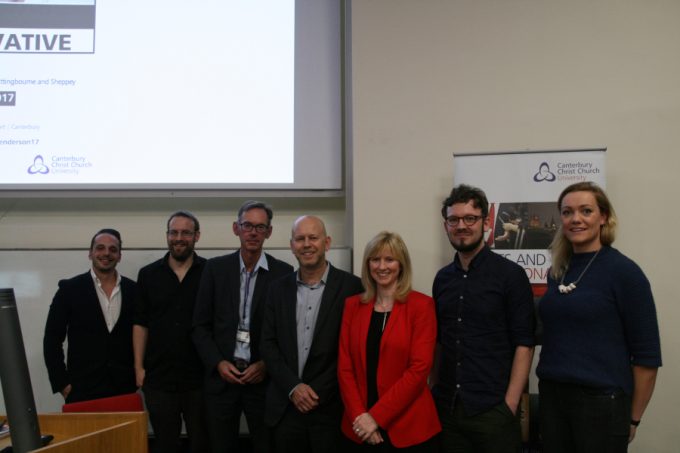