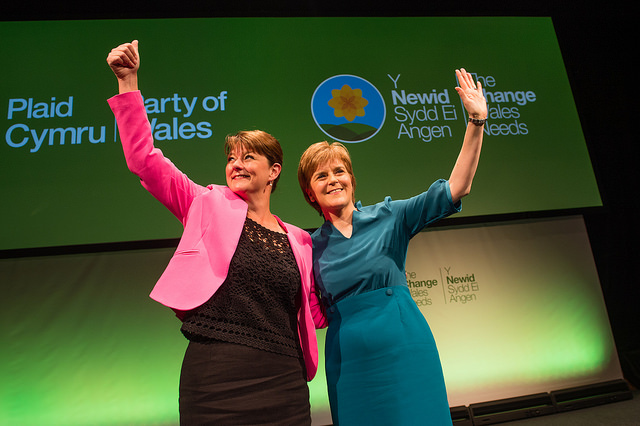 The recent Northern Irish Assembly Elections were significant in all sorts of ways, as this great piece explains. Northern Ireland may be to moving to a very different place politically. Unionism no longer has a majority, the Unionists may no longer hold a veto in the Assembly (via the petition of concern) and there is, on paper at least, an anti-Brexit majority in the new Assembly, that could govern the only part of the UK with a land border with the EU. The elections also led to the resignation of Mike Nesbitt, leader of the UUP, and severely destabilised ex-First Minister and leader of the DUP Arlene Foster who is hanging on but may not last the course of any negotiations.

What is equally fascinating is that Nesbitt, who became leader of the UUP on 31th March 2012, was until 2nd March the second longest current serving party leader in Britain. Plaid Cymru leader Leanne Wood pipped him to the post by a mere 16 days.

Looking across current UK party leaders in the table, there’s one rather surprising fact: more than 50% are women (and this may be related due to the glass cliff). Another surprise is that they are all either quite or very new. Five leaders have been in charge of their party less than a year (including the Prime Minister). Four have been in charge for less than 2 years. Nicola Sturgeon is now the second longest serving party leader in the UK, at a mere 2 years and 3 months.

Current UK Party Leaders and their time in power 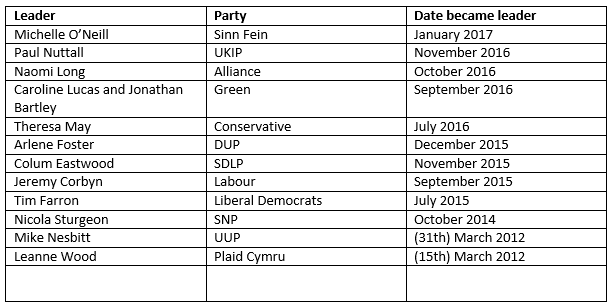 Note: This table only covers parties that have representatives in devolved assemblies and Westminster and doesn’t include separate or semi-autonomous leaders of parties in other parts of the UK e.g. Scotland or Wales and so excludes all sorts of capable leaders like Ruth Davidson.

The combination of a General Election in 2015, other elections and Brexit seems to have taken a heavy toll on party leaders across the UK. What the table doesn’t tell us how many of them who are still there have rather shaky positions: Paul Nuttall of UKIP and Arlene Foster of the DUP have both recently lost elections they probably needed to win, and both currently have the ‘full confidence’ of their party- a sure sign of trouble. This brings us to Jeremy Corbyn, winner of two huge leadership mandates in 2015 and 2016 but who is behaving as if he is under siege and hanging on by a thread. Whether this is because of a crypto Tory plot between Blair, Mandelson and Ivanka Trump or because of a toxic combination of Brexit, Copeland and those polls rather depends on your viewpoint.

The sobering thought is that we are now embarking on the huge and complex task of Brexit with inexperienced party leaders, some of whom are unsafe or wobbly. These will be testing times for political parties as new divisions and politics de or re-align in a bewildering way.

Just to make things even less certain, the two most secure leaders, the Prime Minister and First Minister of Scotland, are on a collision course. Nicola Sturgeon and the SNP’s strengths can be seen in the fact that Scotland is a virtual one party state, though the SNP may have reached its high point in the Scottish Parliament. Theresa May’s strong position is less easily explained. Despite tension with number 11, she is far ahead of where we would expect as a takeover Prime Minister with no mandate and dealing with an issue that has split her party since the 1980s. Both Sturgeon and May came to power because ‘their’ side lost a referendum. Both seem to have now manoeuvred themselves into a corner to have another.

This post first appeared on 10 March 2017 on Political Insight Plus, the digital arm of the members’ magazine of the Political Studies Association (PSA).

Find out how we design assessments to allow students to succeed and get ready for the world of work! https://t.co/JkeK7CaK83
h J R

It was great to hear Dr Susan Kenyon on @bbc5live this afternoon talking about possible impacts of the #RailStrikes for social exclusion and #ClimateCrisis. You could study this in our Environment and Exclusion module – another great reason to study with us!
h J R

@CanterburyCCUni: What could be the impact of next week's proposed rail strikes on our communities, post-covid recovery & the environment? Dr Susan Kenyon has studied transport & travel behaviour for 20 years & explores this in our latest expert comment @CCCUPoliticsIR https://t.co/L8dmabJRU8 https://t.co/Xek115YuzB 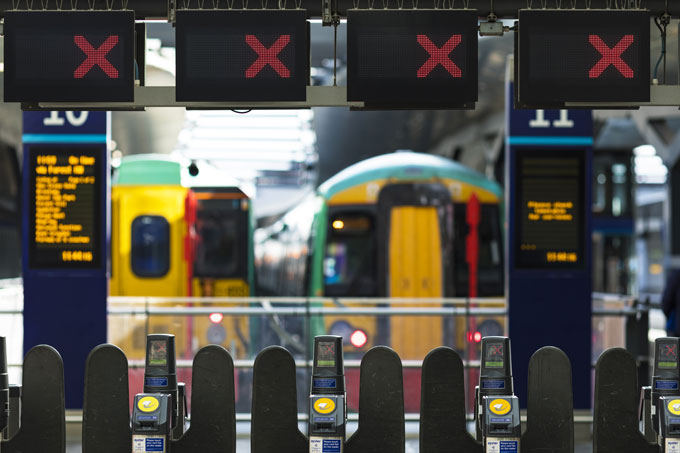