Experiences of looked after children and ‘instant adulthood’

Ruth Rogers from the Research Centre for Children, Families and Communities writes about her research on children in care:

There are approximately 75,000 children ‘looked after’ or in care in England in 2018. Despite efforts to reduce the numbers of children being looked after, this number has been steadily increasing every year since 2008, with 63% of children entering care because of ‘abuse or neglect’. Unfortunately, once in care, looked after children continue to experience poorer outcomes than other children and this continues into adulthood. Children who have been looked after are less likely to achieve academically and young people who have spent time in care are more likely to experience homelessness, problems with drug or alcohol abuse, involvement with the criminal justice system or become teenage parents.

Ruth Rogers has been researching the experiences of looked after children since 2011 and her research has focused on the idea of ‘instant adulthood’ and the transition made by looked after children as they leave the care system. Her qualitative research with care leavers and social workers has highlighted the injustice in that although care leavers tend to be amongst the most vulnerable and disadvantaged social groups, their support still tends to be abruptly terminated as soon as they reach the age of 18. This research  has been widely cited by authors and NGOs across Europe, Australia, New Zealand, North America and South Africa.

In addition to research with looked after children, she has conducted research into adoptive placements. With Manchester Metropolitan University and the University of East Anglia, she conducted research on the matching process between adopters and children who had been identified by the government as being ‘hard to place’. The findings from this research have led to national inter-agency adoption policy change for children who have been waiting for adoption for 18 months or more.

Vanessa Young discusses the BabySong Project which was a Faculty research project funded by the Ragdoll Foundation:

Babies are born with a pre-disposition to music and actually prefer listening to Infant Directed Singing (IDS) than to normal speech (e.g.: Trehub 2003, Trehub and Nakata 2001; Young 2015, Young in Goodliff et al 2017). The BabySong Project, co-directed by Professors Kathy Goouch and Sacha Powell, challenged what was perceived as a growing functionalism in baby care.

A key aim of the Project was to develop a closer, more intimate approach to interactions between practitioners and the babies in their care. We worked with baby room practitioners from local nurseries to explore ways in which singing and song could be incorporated into their everyday tasks and activities with their babies.

We developed a ‘Spectrum of Song’ to encourage practitioners to think broadly about singing, beyond nursery rhymes and children’s songs. We fostered exploration of all aspects of vocal expression and sought ways to turn a range of vocalisations – through playful, imaginative and spontaneous approaches – into ‘singese’ (or ‘singing’) opportunities, integrating them into regular interactions with their babies.  We discussed the value of ‘stillness’, and songs to soothe as well as enliven (including vocalisations and improvisations), but noted that although lively ‘play songs’ seemed to be encouraged by managers, ‘closeness’, and ‘being still’ with babies could be seen as problematic in baby rooms in day-care contexts.

A Celebration of Sport

On Tuesday the 25th June 2019, over 650 children from 50 different schools within Kent joined us today at our CCCU facilities at Polo Farm to celebrate the diversity of the Kent School Sport Games.  The Kent School games finals of Cricket; Panathlon; Active Health; Tri-golf (led by the degree students) and Disability Football (led by the degree students).  The day started with Jack Green providing the children with an inspirational talk before they started their events.

Bronwyn Toms a student on the Foundation Degree reports on set up and impact of students leading the disability football finals from today.

Bronwyn is a student on the Physical Education and Physical Activity course at Canterbury Christ Church University and is nearing the end of her second year and completion of the foundation degree. The current module in which the Kent Sport Games features is within is the ‘Inclusion and Adapted Physical Activities’ module and she reports that running the Disability Football “is such a great opportunity for us and expanded our knowledge of the ways of football could be adapted for all children”. Bronwyn is planning on continuing onto the top up BA hons in Physical Education and Physical Activity course and plans to complete a 4th year to complete her teaching qualification.  Completing this route has enabled her to work and study at the same time, allowing her to develop and complete her degree. 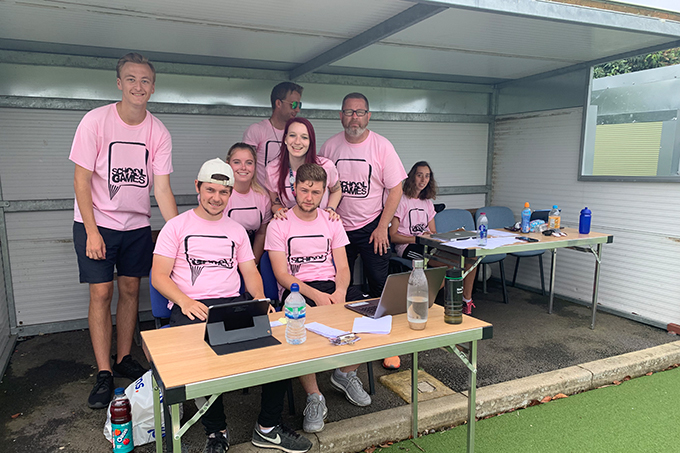 For the disability football final school games, Bronwyn’s year 2 Physical Education and Physical Activity group oversaw the organisation the of the event with assistance of the Football Association. They had to create suitable rules and the way the pitches were going to be constructed. The venue was full of hot, excited children all eager to get going. Even though there were numerous activities going on within the disability football programme, Bronwyn identifies the importance of allowing the children to mix with everyone and other schools as it “was very inspirational to watch the children with disabilities mix with others and come out of their comfort zone, the way they behaved towards each other and the sportsmanship they showed was just delightful and heart warming to see”. “It was so important that everyone felt included and part of the team, and I felt it was very successful and that we were able to apply the theory we had learnt in our module to our large practical event”.

Browyn continues and states that she believes that “we had a significant impact on the children. This is because one of our core aims was not focusing on the winning- getting the medal at the end, but promoting teamwork, inclusion and enjoyment.” The children after they finished their last game reported into Browyn that “she had loved the day because I have been able to play with my friends and meet other people like me.” This shows how important events like these are, that are supported and facilitated by our CCCU students as children may not have met other children with their disability before and meeting them through a sport or something they love may just give them a push in the right direction to become more sociably open and participate in life long physical activity.

Browyn would like to thank the university tutors for their patience and trusting us with such a big task, Lauren from the FA for all the guidance and dealing with our endless questions, and the children, for being creative, passionate and engaged. It was a very successful and special day.

For more information about the foundation degree, please contact: physical.education@canterbury.ac.uk 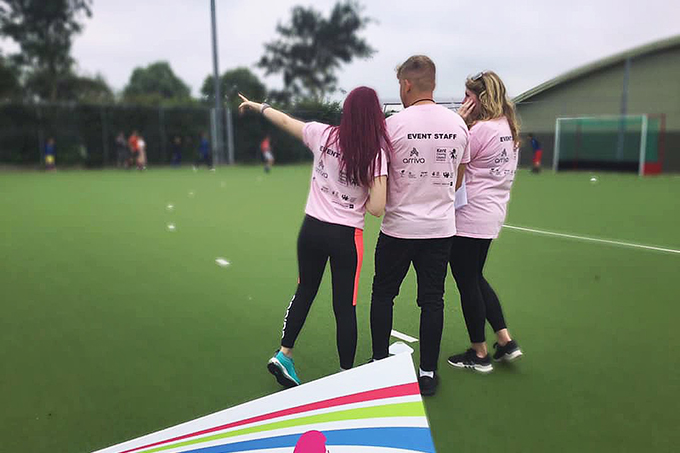 Professor Berry Billingsley gives us an insight into the Epistemic Insight Initiative:

What insights do we expect young people to call on when they address the big questions of life and the universe? How can schools prepare young people for a world that is awash with false facts and exaggerated headlines – and equip them with the best ideas and strategies we can offer to help them make decisions rationally and compassionately? What strategies can schools use to give future great minds of science and other disciplines the inspiration and stimulus they need?

Big Questions are questions about the nature of reality and human personhood and some examples of puzzles today include, can a robot be a good companion, can and should genetic engineering be used to make better people, why does life and the universe exist and to what extent is it true to say, ‘you are what you eat’?

These questions bridge science, religion and the wider humanities and are frequently squeezed out of school education because they do not fit into single-discipline subject boxes. They are also squeezed out because they raise issues that are perceived as controversial. And yet these are questions where great scholarly and technological advances are being made and where the conclusions and outputs affect the lives of individuals and society.

Teaching epistemic insight goes hand in hand with teaching a knowledge-rich, broad and balanced curriculum. We will explore ways to build students’ understanding of different types of disciplinary knowledge and what happens when they are brought to bear on questions that bridge subjects and disciplines.

The Epistemic Insight Initiative will involve eight Higher Education institutions, led by Canterbury Christ Church University, with funding from the Templeton World Charity Foundation, the Royal Academy of Engineering, The National Collaborative Outreach Programme and All Saints Education Trust. The LASAR (Learning about Science and Religion) team and the Faculty of Education have been awarded more than £1.5 million to carry out the research. The Initiative launches on Thursday 16th May with an event for students of all ages at Canterbury Christ Church University. This will showcase some of the activities on offer to schools for formal and informal learning (such as outreach events, clubs and homework). This includes a conference for schools at Westminster Abbey on 12th February 2020.

Through the research we will provide a Framework for Education for use in primary and secondary schools. Already drafted, this explains, key stage by key stage, how to develop students’ expressed curiosity about Big Questions and their capacities to be wise about how knowledge is and can be formed and tested within subjects and across them. In these ways the Epistemic Insight Initiative will develop and test strategies designed to help schools to: