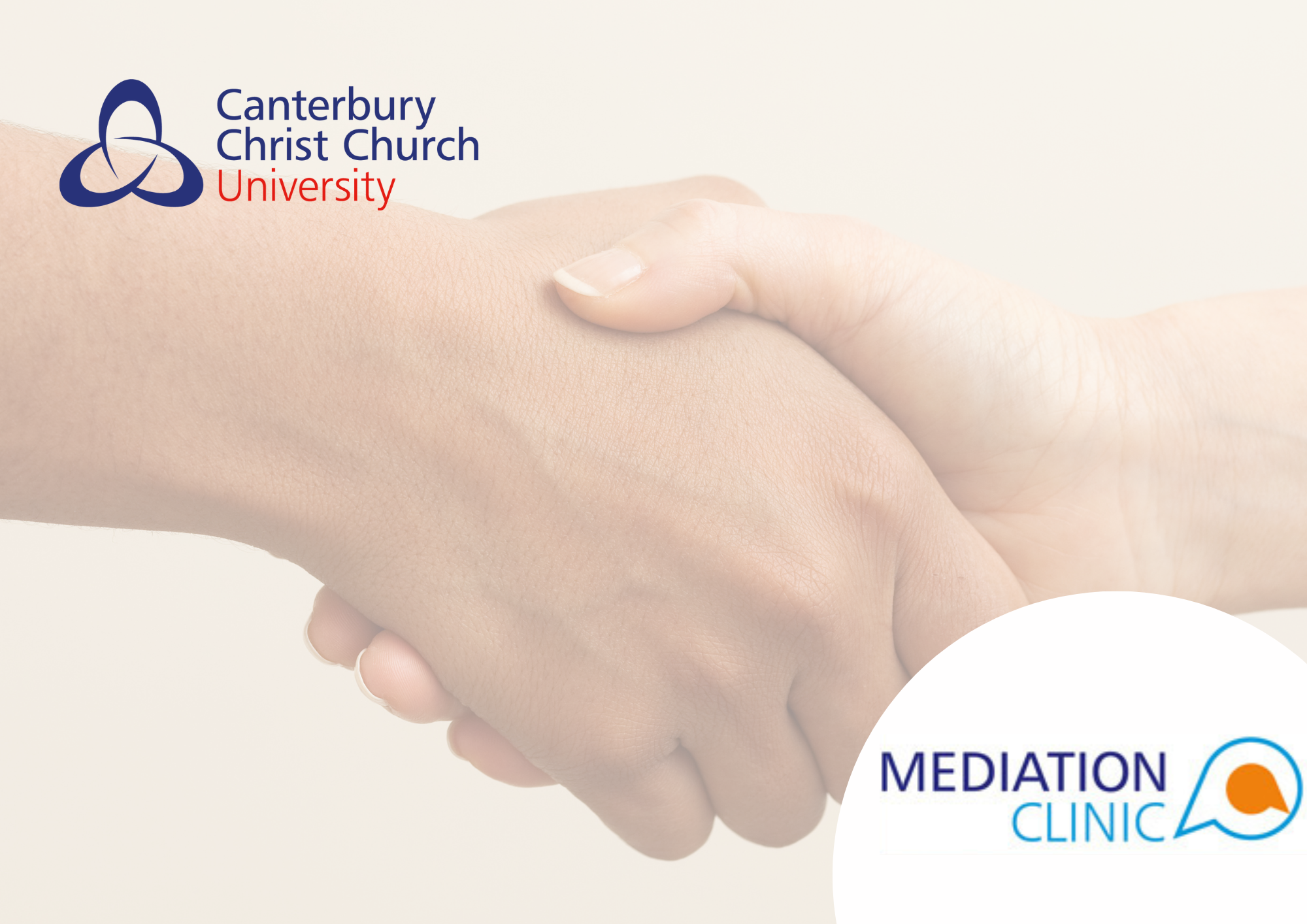 Mediation is a flexible and confidential process used to settle a dispute between two or more people, businesses or other organisations.

The Mediation Clinic at Canterbury Christ Church University delivers quality, professional mediation services to the local and wider community for the resolution of a range of disputes. As a University, our primary focus is education, and the work undertaken by the Mediation Clinic helps achieve that aim, as well as encouraging research activity and reinforcing our civic role in the wider community.

Whether you are an individual or someone running a business, taking an opponent to court in order to resolve that dispute, is not only a daunting experience, but is always costly in terms of time and expense.

Mediation is an alternative route to finding a solution for a range of disputes, allowing people to resolve their problems with mutual respect and, in some situations, helping to restore friendships and relationships.

One of the most attractive factors for choosing mediation rather than litigation is that the parties in dispute have ultimate control over the outcome. Because the process is voluntary, nothing is imposed on the parties and an agreement is only reached when the parties are prepared to sign an agreement evidencing the settlement reached. Solutions found through mediation can also be much more creative, rather than the restrictive remedies available in court, which in the context of a civil claim generally result in an award of compensatory damages for the successful party. For example, if you have some building work done which you aren’t happy with, the builder could agree to do further work, at no cost, as compensation.

It’s precisely this style of resolution that inspired Ben Waters, Founding Director of the Mediation Clinic, to promote the use and teaching of mediation. A Principal Lecturer in Law at the University, Ben spent 20 years as a litigation solicitor before joining academia, dealing with disputes ranging from construction to personal injury. He has seen first-hand how brutal the result of losing at a trial court can be.

“I have seen people totally broken by litigation,” Ben explains, “losing literally everything in order to try to win their case. Because people in conflict are coming together, mediation can often be a very emotional experience; however, with the right kind of guidance from a trained third party neutral (the mediator), disputes can be resolved with respect on both sides. This differs from litigation, which is a competitive gamble; there are only winners and losers in a court room and sometimes the stakes for losing can be very high”.

“A mediator can ask far more searching questions than could be answered in open court. They can get to the underlying cause of a dispute, which may not always be immediately apparent and can sometimes encourage people to understand, or at least see the other’s point of view”.

“One such case involved a dispute which had been going on for years involving the very thorny issue of rights of way and access to land. A landowner had leased land to a tenant who subsequently erected a building across the neighbour’s right of way. It was a very complicated case and involved all parties and their representatives attending a site visit. The parties eventually came to a settlement after another ten hours in mediation. Finally, they agreed on a new right of way and rights of access granted to the neighbour to certain necessary utilities on the landlord’s property. The parties were also able to define a boundary, which had been under dispute for many years and was at the bottom of all the hostility. This dispute was resolved in a day, whereas a trial would have taken at least five days at great expense.“

“In another case, a brother and sister who had not spoken to each other for 20 years were brought together through the University’s Mediation Clinic. In a highly charged atmosphere, they managed to overcome their emotions and finally talk to each other face to face, giving their own points of view and venting pent-up frustrations which had divided the family. A dispute over who had bought the property the sister was living in was finally resolved through them both realising their continuing love for each other. They agreed to swap houses and the sister moved into another of the brother’s houses in a different part of the country.“

“Similarly, a dispute between a couple who had a daughter together was resolved fairly amicably after a very difficult start. Once again, this was a dispute involving much emotion concerning property rights, together with the added sensitive issue of a child’s feelings, but was resolved with compromise on both sides. Having separated once before, the father moved back into his partner’s house, paying off the outstanding mortgage with an inheritance he had received during that two year reconciliation. He also contributed to the costs of some improvements and a car for his partner. It was agreed that, in return, he would have a share in the property. When they split up finally, she offered him an amount which he felt did not reflect his investment in the relationship or honour their agreement. He asked for significantly more money. Through mediation, the parties agreed that she would pay him a lump sum within three months, and he could put a charge on the property, which he would collect when either their daughter reached 18 years, or she sold the property, or remarried.“

“Mediation isn’t for everyone or suitable for all disputes, however. It is important that the mediator explains what the parties are to expect from mediation. For a start, the parties in dispute will be in close proximity during the mediation process and will be required to work together if they want to find a solution. Parties therefore need to be prepared to reach a resolution that will involve compromise. One major attraction of mediation is the fact that the process is completely confidential and without prejudice, so if the case does go on to litigation, nothing said or produced as evidence at the mediation can be used in court, unless that evidence would have to be disclosed anyway.“

“When it is obvious that the people in conflict are not going to be able to be in the same room as each other, either because it is too emotional or discussions have broken down so badly that they simply cannot communicate, then private meetings between each party and the mediator can take place in separate rooms with the mediator ‘shuttling’ between them.“

First launched in 2008, the University’s Mediation Clinic provides a service for local people and small to medium-sized businesses and is also a tremendous resource for Law students at the University; students can link the work of the clinic to their curriculum and gain valuable skills by learning first-hand how to mediate and resolve disputes in a way, which has for some time now, been encouraged by successive governments. With the parties’ consent, students can sit in on the mediation sessions prepare the cases and reflect on the outcomes.

For more information on the Mediation Clinic, go to: http://www.canterbury.ac.uk/mediation-clinic